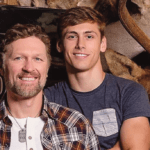 “It’s still difficult. I mean, Jerry is the first thing I think about when I wake up and the last thing I think about when I fall asleep. There are times when I am angry and I don’t understand it, and then there are times that I am joyous that we had him for 19 years. You have to let those joyous moments steer you away from the anger. I pray about it all the time. I don’t understand it and I probably never will until I get to heaven.” Craig Morgan said

Inspired by the tragedy and pain of losing his son and how it led Craig Morgan to find comfort in God’s presence. Morgan’s son, Jerry, died in a tragic tubing accident on Kentucky Lake, Tennessee in 2016 at the age of 19. The value of grasping the good deeds in life has not only grown in the country singer’s day-to-day during these rather uncertain times but also toils as the lyrical cornerstone of his new album

“I attribute my healing to my faith,” says Morgan

In his new album released on Friday. Morgan shares his memoir and said he wishes his songs will be an inspiration to others who are coping with struggles of their own.

After Jerry’s death, the songwriter found himself tussling with what had fallen to his family. His newest single, “The Father, My Son, and The Holy Ghost,” details the emotional and spiritual struggle he endured in the first three years following his son’s death. The single reached No. 1 on every chart on iTunes after its release.

Morgan, served as a deputy sheriff in Tennessee before he became a country music star was also a military veteran.

The following is an edited transcript of The Christian Post’s interview with Morgan where he shares how his Christian faith has been great nourishment to him.

CP: So many souls have suffered tragedy recently, can you define what your journey through grief has taught you?
Morgan: Grief is pain. I can’t say that it’s taught me anything outside of discovering how to control my outward cast of emotions. But I can state that following Jerry’s death, I have discovered comfort in the blessings of His presence, more so than pain or anger in His loss.

CP: Was there a supernatural encounter behind composing the song, “The Father, My Son, and The Holy Ghost”?
Morgan: I wouldn’t say supernatural in the sense that most people recognize the supernatural activity, like a physical presence of God or ghostly-like experience. But I firmly believe beyond any shadow of a doubt God guided me spiritually and provided me the words to that song.

CP: Will you share a recent conversation you had with God?
Morgan: My recent conversation with God was in the form of prayer. Giving thanks for all of our blessings, asking for forgiveness for my sins, and asking for strength to defeat the devil’s temptations. Also, praying that His name will be glorified through me and my works.

CP: What do you want people to hear from your new album?
Morgan: I hope that when people hear this album— God, Family, Country — they are motivated and uplifted and discover or experience a restored sense of thankfulness and gratitude for what, I consider, are the three subject elements that make up our American lifestyle.

CP: How would you like for your faith to impact those surrounding you?
Morgan: I don’t think my faith should ever be the subject of anyone’s spiritual incentive. Instead, they should direct on what it is I have faith in, God. The sole source of inspiration.

After Jerry’s death, the songwriter found himself tussling with what had befallen to his family. Craig Morgan latest single, “The Father, My Son and The Holy Ghost,” describes the emotional and spiritual struggle he endured in the first three years following his loss. The single went to No. 1 on every chart on iTunes after its release.

After Blake Shelton spearheaded a successful social media viral campaign to boost Craig Morgan’s latest song, “The Father, My Son & the Holy Ghost” to No. 1 on the iTunes chart, Craig published a heartfelt thank-you to the fans and Blake via Instagram.

Craig Morgan Releases Heartfelt Thank-You After “The Father, My Son & the Holy Ghost” Reaches No. 1: “Jerry’s Work on Earth Did Not End With His Passing”

“Wow! I’m so completely humbled by all the support the world has shown this song,” said Craig. “Blake Shelton. You are an awesome friend and champion for country music. We love ya, and I cannot thank you enough. The support the entire entertainment community and music fans have shown is a testament to the love that country music embodies. This song is a God thing. I hope that it reaches all who need to hear it. My son Jerry’s work on earth did not end with his passing. THANK YOU, everyone.”

Craig Morgan is well past his Christian singer prime if we’re speaking manifestly. Perhaps with the recent achievement of songs pinned by faith like Blake Shelton’s “God’s Country,” radio programmers and the wider public will at least give “The Father, My Son, and the Holy Ghost” some fair reflection. But even if they don’t, the song achieves what Craig Morgan set out to do, which is to deliver some resolution to a tragedy, give his experience and wisdom of how he got through the most profound of grief, and get back into the house of making country music, which is where he belongs.

Delivered to you by COPTICNN™ | Coptic News Network on 2020-05-22 from Tennessee, United States of America