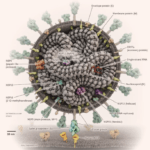 The Eucharist: Is it a definitive entry route of viral COVID-19 infection

The Coronavirus disease 2019 (Covid-19) pandemic has revealed a multitude of vulnerabilities at many levels of society. For example, many individuals and communities were still taken by surprise by the “sudden” emergence of the current pandemic, despite thousands of scientific reports published since the first appearance of severe acute respiratory syndrome (SARS) coronavirus in 2003.

Since we will have other epidemic outbreaks in the future, regrettably, it is essential to consider the scientific evidence.

The Orthodox Church and scientific theory typically parallel each other. Yet, if a reconciliation deemed unreachable among Church and science, it flags that it is time to reconsider traditions in light of current scientific evidence.

Science cannot in any way dictate Orthodox theology, but rather contributes to the theological aspects of the Church and society in general.

In the same manner that scientists and physicians are called to respond to medical-related crises, as Orthodox Christians, clergy have a paramount responsibility to teach the faithful.

Concerning the Orthodox Church, there are considerations involving traditional practices including the use of the common spoon for Communion [Byzantine Communion Spoons: A Review of the Evidence], for which there exists scientific evidence supporting this custom as a definitive entry route of viral infection.

Specific to Coptic Orthodox Christians is how Holy Communion is distributed via the use of a common spoon that is shared among all communicants within a congregation.

26 While they were eating, Jesus took bread, and when he had given thanks, he broke it and gave it to his disciples, saying, “Take and eat; this is my body. 27 Then he took a cup, and when he had given thanks, he gave it to them, saying, “Drink from it, all of you. 28 This is my blood of the covenant, which is poured out for many for the forgiveness of sins. The Lord Jesus instituted the holy Eucharist on Covenant Thursday.

While scientific tools fall short in being able to explain mystical changes caused by the action of the Holy Spirit, Orthodox theology compensates for this limitation by affirming that the transformation of the Eucharistic Gifts occurs via a mode of profound theology and distinguishing between the mystical action and the physical elements: bread and wine. Contributing to the latter point regarding the distinction between the mystical and the physical, the fields of biochemistry and molecular biology provide clarification about the actual physical elements of the consecrated Gifts.

For example, the consecrated wine is comprised of:

Similarly, the bread contains yeast, sugar, and flour and has been processed to rise and bake in the oven.

The Eucharist: What The Science Says?

Concerning the transmission of SARS-CoV2, as a Church, we are challenged to ask how far should we go in utilizing the justification of being pious as a reason to ignore the scientific evidence? The practice of utilizing a common spoon poses a severe and potentially fatal health risk not only to Orthodox Christians but to the broader public.

Sharing a common spoon (or any object) among different individuals is a critical consideration because the oral cavity is lined with epithelial cells equipped with a receptor (angiotensin-converting enzyme 2 – ACE2) which enables the entry of SARS-CoV2 (virus) into these human host cell, since High expression of ACE2 receptor of 2019-nCoV on the epithelial cells of the oral mucosa, and SARS-CoV-2 Cell Entry Depends on ACE2 and TMPRSS2 and Is Blocked by a Clinically Proven Protease Inhibitor.

Such ACE2-expressing cells also line the human nasal cavity, SARS-CoV-2 entry factors are highly expressed in nasal epithelial cells together with innate immune genes, the mucous membrane of our eyes, lung tissue, and other organs—hence the unsurprising multiple organ involvement of SARS-CoV2 infection across all age groups. As transcribed in COVID-19 and Multiorgan Response, Acute heart failure in multisystem inflammatory syndrome in children (MIS-C) in the context of global SARS-CoV-2 pandemic, and Cardiac Dysfunction and Thrombocytopenia-Associated Multiple Organ Failure Inflammation Phenotype in a Severe Paediatric Case of COVID-19.

SARS-CoV2 is a 120-nanometer coronavirus that has accomplished a significant evolutionary feat to bind the human ACE2 receptor with high affinity, ensuring its entrance into host cells for self-replication.

Viruses exist on this earth for the sole purpose of replicating their genome. This is their unique evolutionary pressure. They are harmless on their own and are easy to deactivate in most cases. Besides, certain viruses are paving the way to understanding brain neural circuits of behavior, while other types of viruses are utilized as therapeutics for diseases, including vaccines to protect against diseases.

The symptoms associated with Covid-19 are caused by a response of the immune system and not directly by the virus itself. The virus diminishes significantly in the second week of infection, yet this is the time point at which serious symptoms begin to arise. Therefore, it is the limitations of the human immune system which enables the progression of the disease, rather than the virus.

The presence of the ACE2 receptor (and other viral binding factors) on host cells is what makes humans vulnerable because it is this receptor, in part, which enables the entry of this coronavirus into cells—triggering a cascade of immune system events.

Since these are biomedical related matters it is, consequently, critically essential to correct the dangerous misconception that diseases and viruses cannot be transmitted via the administration of Holy Communion.

The first misconception is that an illness or disease is being transferred when in reality it is a virus.

SARS-CoV2 is a virus: a collection of genetic code surrounded by a protein coat searching for a host cell to thrive.

An “illness” is the manifestation of a disorder in the human body. It is, therefore, scientifically, impossible to transmit an illness/disease via the distribution of Holy Communion.

The second misconception is the idea that viruses themselves cannot be transmitted via the administration of Holy Communion, which is scientifically incorrect.

While it is not recommended to conduct such an experiment in the Orthodox Church, others have experimentally demonstrated that the communion cup contains bacteria that is inadvertently transferred into the cup after administration of the sacrament during Eucharist, Survival of Bacteria on the Silver Communion Cup.

There is, therefore, no reason to believe that SARS-CoV2, a coronavirus with a high rate of infectivity, cannot be inadvertently transferred into the communion cup by clasping to the common spoon (from the saliva of an infected communicant) and transported into the cup through person-to-person transmission throughout the distribution of the sacrament.

During pandemics, scientists and physicians have an enormous responsibility to inform the public including clergy with accurate information regarding the mode of pathogen transmission.

COPTICNN seeks to promote conversation by providing a forum for diverse perspectives on contemporary issues related to Orthodox Christianity. The positions expressed in this essay are solely the author’s and do not necessarily represent the views of the editors or the Publication.

Adopted from The Eucharist, Its Physical Elements, and Molecular Biology By Hermina Nedelescu.

Hermina Nedelescu is a neuroscientist who utilizes viruses to study brain neural circuits of motivated behaviors. She holds a B.S. degree in Biological Sciences from the University of California Irvine, an M.S. in Biology from New York University, and a Ph.D. in Biomedical Sciences from the University of Antwerp in Belgium.
Delivered to you by COPTICNN™ | Coptic News Network on 2020-05-07 from Washington, United States of America
COPTICNN™ | Coptic News Network & COPTICNN™ DIRECTORY | Christian Business Directory