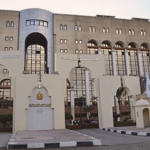 Egypt Today: From Zero to Hero Under 7

A look back at Egypt 2013 Vs. Egypt Today: Realities defeating evil falsehoods

Seven years ago, following the victory of the Egyptian’s revolution on 30 June 2013, Egypt was a quasi-state, suffering from internal security turmoil, sectarian and political strife; on the brink of economic collapse; detached from its Arab surroundings and blockaded in its African continent as its relations with the world countries are cut.

Propaganda, rumors, and campaigns by the terrorist group and its external allies have continued throughout these seven years, attempting to portray and promote a deceptive picture of Egypt.

Egypt Today & The Citizen Portfolio: The unity of Egypt. The Holy of Holies.

The unity of the people of Egypt, among its Muslims and Copts, is one of the holiest bodies her people cherish over the ages.

However, the terrorist group and its allies thought to target churches and pursuing desperate attempts to demolish the unity of Egyptian minds, hearts, and souls.

And despite the difficult task, however, the State and leadership presented a model to the people.

The largest church in the Middle East and the largest mosque were built in the new administrative capital.

The balanced treatment of all matters relating to this file continued through the reconciliation of the status of thousands of church headquarters and the issuance of the unified law on the construction of places of worship to establish equality in its overall sense.

Egypt’s pages in all international reports are a tribute to what Egypt has achieved in the field of citizenship and equality.

Egypt Today & The Security Portfolio: The road from terrorism to an oasis of security and peace

Terrorism was the tool and weapon of the terrorist group which tried, after being overthrown peacefully by the will of the people, to take over Egypt, by deploying and recruiting terrorist.

They and their collaborators at home and abroad tried to stigmatize Egypt by terror and turning it into a quagmire of terrorism and instability. They used all means to spread horror and fear in cities and deserts throughout Egypt, against the army, the police, churches, mosques, museums, innocent citizens, and public utilities alike.

They spent billions and recruited thousands. According to studies of independent research centers, they carried out 232 terrorist attacks in Egypt during the last six months of 2013, killing 195 army and police personnel and 802 civilians.

In 2014, they carried out 182 terrorist attacks that left 157 army and police martyrs and 41 civilians dead.

In 2015, they carried out 310 terrorist operations that killed 178 armies and police personnel, 318 civilians.

During 2017, they carried 169 terrorist operations leaving 185 army and police martyrs and 144 civilians.

In 2019, terrorism was confined to a limited remote geographical area in northern Sinai and some infiltrators from the western border were soon being eliminated.

Thanks to the will and unity of the Egyptian people, Egypt today’s army and police have been able to provide “complete security” throughout Egypt to its citizens, and guests.

In parallel with countering terrorism and security stabilization, Egypt began to build institutions that reflected the will of the people.

An Egyptian constitution was drafted by an elite that truly exemplified the aspirations of the people, the newly-drafted constitution enjoyed broad popular support

Later, free presidential elections were held twice in the presence of international media.

A new parliament has been elected, which will complete its parliamentary session and prepare for new elections.

Egypt today Senate established a minimum limit for women’s representation in parliament as a constitutional amendment.

Egypt Today & The Economic Portfolio: From collapsing to dazzling

One of the most difficult seven-year challenges was the economic file with a direct impact on the lives of citizens. Without a strong and successful economy, there were no jobs, no social services, no facilities, and no strong army.

At home and abroad, a terrorist group and its external allies tried to spread suspicions about Egypt’s ability to rise again, and they called on countries, governments, and economic organizations to refrain from helping Egypt’s “crumbled” economy.

The “resurrection” of that reality needed a miracle after all aspects of economic life had receded. But the will of the people had another story, the State began with the New Suez Canal project, which was a symbol of the ability to overcome difficulties, and to find solutions and achieve accomplishments.

A few years later, the picture changed. After low growth rates that were, in fact, negative (deflationary), Egypt achieved increasing growth rates of nearly 6% prior to the repercussions of the current Coronavirus pandemic, the cash reserves were reinstated and unemployment fell from 13.4% to 7.5% in 2019.

Egypt today has presented the world with an impressive model of economic reform and the capability to achieve it.

In the scope of urban development, the basic infrastructure has been rebuilt in the domains of roads, drinking water, sanitation, etc.

The country was transformed into a major construction workshop from Al-Alamein in the west to Aswan in the south; and Sinai and Al-Galala in the east. In a series of fourth-generation cities, atop of which comes the new administrative capital, along with the continuous development of infrastructure in all cities and villages of Egypt.

Probably the most significant to the world is the provision of sanitation to 40% of Egypt’s villages, compared to just 11% in 2014.

In the field of housing, the National Housing Project has been fitted to provide hundreds of thousands of housing units for all social strata, and the State has thoughtfully tackled the problem of slums and changed the lives of millions of Egyptians within a few years.

In the field of electricity, the State has allocated 614 billion Egyptian Pound over six years, transforming Egypt from a country plagued with electricity obstacles to a state that exports electricity and energy. Egypt today doubled its capacity by adding 28,000 megawatts of electricity.

In the field of roads, the development arteries, President Abdel Fattah El-Sisi launched in June 2014 the National Road Project by implementing 39 roads with a total of 4,400 km. The different stages with completion rates have elevated Egypt’s ranking from 113rd to 28th place in the world. Egypt today modern roads have saved thousands of lives, with the number of deaths in road accidents plunging to 50%.

In the field of production and development, Egypt today placed agriculture at the forefront with the reclamation and cultivation of a 1.5 million acres project. Followed by a set of preserved agriculture projects for optimal water usage, as well as aquaculture projects that contributed to closing the food gap in this area.

In addition, hundreds of projects are underway to reuse agricultural wastewater and desalination of seawater.

In the field of industry, the Rubiki Leather City, the Furniture City of Damietta, has been ascertained, and textile, automotive, and other projects have been developed.

In the field of oil and gas, Egypt bid farewell to years of stagnation and debt for global energy companies. Achieved a major breakthrough in exploration and industries resulting in historic discoveries that transformed Egypt from an importer of natural gas, into a gas exporter, to a global gas trading hub.

At the same time, the Egypt Today’s Economic Zone of the Suez Canal began to attract investments and fulfill promises to provide employment opportunities for the citizen and add more strength to the Egyptian economy.

Social development is the most humane issue in Egypt today’s successful economic development. Egypt today aims to improve the lives of its citizens and strengthening the basic services provided to them. It also protects low-income societies from bearing any negative consequences of economic reform.

Projects and initiatives in this context include cost-effective social housing plans, the development of slums, the development of the subsidized bread system, raising the minimum wage, the creation of a new system of monetary support, including projects of “Solidarity & Dignity”, “Decent Life”, etc.

Egypt today’s two most important areas of social development are the health portfolio, where the “100 million Health” initiative was launched and is currently underway.

Under this initiative, the world’s largest comprehensive medical review of people was carried out. Other initiatives include the surgical waiting time initiative and a comprehensive health insurance project, which has already begun its first stages.

The second area is the education portfolio, which is witnessing the boldest and most profound development and change in its systems, curricula and tools, the rehabilitation of buildings and teachers.

Under a real citizen lead revolution, Egypt today will be transformed into the heart of the modern age of science and technology.

Egypt Today: From Zero to Hero Under 7