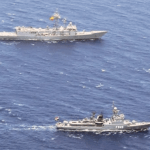 Navy Exercise between Cairo and Madrid

The Egyptian frigate “Suez” and the Spanish frigate “Numancia” conducted on Thursday 25/6/2020 a joint naval exercise in the Red Sea at Berenice Military Base in the Southern Fleet’s zone.

Egyptian, Spanish navies carry out a navy exercise in the Red Sea

“is one of the specific combat exercises that contribute to achieving cooperation between the marine formations to confront threats and hostilities.” Col. Tamer al-Rifai said that the training

The drills come as a part of the general command of the Armed Forces’ plan to boost military cooperation and exchange expertise with friendly countries. The naval exercise included carrying out many training activities to enhance the maritime security in the southern Red Sea area in line with the United Nations Convention on the Law of the Sea.

During the maneuvers, Egyptian and Spanish fleets carried out several activities to achieve harmony in their performance of joint combat missions, according to the statement.

They also trained on cooperation between marine formations to confront various threats and hostilities and restore the efficiency of naval units by providing them with re-supply in the sea.

It is the second time for Egyptian and Spanish navies to hold a joint military exercise in the same place this month, after a similar one was held on June 18.

The training aims to benefit from the Spanish capabilities in achieving mutual interests and promote military cooperation between Cairo and Madrid.

Earlier, Egypt has announced that they are establishing a new commando force as part of their navy. This force will work with the Libyan National Army (LNA) to block Turkey from getting its ships to the Libyan coast. Egyptian force will coordinate with Hafter to keep Turkey out of Libya.

Navy exercises in the Mediterranean

The Egyptian naval forces used a French-manufactured Mistral-class helicopter carrier, which is known as ENS Gamal Abdel Nasser, Gowind-class corvettes, Perry-class frigates, and 209-class diesel-electric attack submarine during navy exercise said the Egyptian Ministry of Defense in a statement on Saturday. A number of forces of the anti-submarine units and special naval forces participated in the exercises, the statement added, noting that various types of helicopters such as F-16, Apache, Chinook, and Kamov were used by air forces in the drills, along with forces of the Northern Military Region in Alexandria took part in the maneuvers.

The navy exercises were attended by Chief of Staff of the Egyptian Armed Forces Mohamed Farid and Chief of Navy Force Ahmed Khaled, besides a number of leaders of the Armed Forces.

The Egyptian Navy, also known as the Egyptian Naval Force, is the maritime branch of the Egyptian Armed Forces. It is the largest navy in the Middle East and Africa and is the sixth-largest in the world measured by the number of vessels.