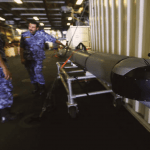 Differences and conflicts between Egypt and Turkey have intensified, while Turkish threats became clear in the Mediterranean, which disturbed Cairo and prompted it to conclude armament deals for the Egyptian navy to face any military dangers from the Turkish side.

Egypt continues the build-up of a new commando force as part of its navy. This force will work with Libya’s self-proclaimed Libyan National Army (LNA) to block Turkey from getting its ships to the Libyan coast.

Force will coordinate with Hafter to keep Turkey out of Libya

“The Egyptian army follows a policy of deterrence, which depends on the principle of preparing for war, even if it does not aspire to fight — that is, equip itself with force, arm and display its strength in joint exercises until its enemies retreat.” Maj. Gen. Nasr Salem

Egypt has long backed Gen. Khalifa Hafter’s liberating Lybian role from Islamic Groups in Libya, in which his LNA are aiming to take the capital of Tripoli. The Government of National Accord (GNA), in Tripoli, is backed by Turkey, and Turkish officials have promised to keep sending military support.

Turkey’s support includes sending arms, and smuggling in Syrian rebels to fight against the LNA. Egypt has been working with the LNA on trying to keep Turkish ships from getting more forces in, and now it seems Egypt is going to get directly involved.

The LNA has substantial backing from foreign powers, including Egypt and most of the Gulf Arab states. Turkey is one of the few nations publicly backing the GNA and has since the GNA gave them exploration rights for offshore oil and gas.

Egypt boosts navy amid Turkish threats in the region

Egypt is seeking to provide advanced arms to its army in light of the Turkish threats in the Mediterranean region and Libyan territories. The conflict befell in light of the unstable relations between Cairo and Ankara following the Egyptian ouster of Muslim Brotherhood President Mohammed Morsi in 2013.

Egypt is intensifying its naval capabilities in light of the growing challenges it faces in the Mediterranean, especially after Turkish newspaper Yeni Safak, a confidential to the ruling Justice and Development Party in Ankara, reported in mid-June that Turkey intends to establish a Lybian’s naval military base in the city of Misrata intended at commanding the Mediterranean.

Additional reports have been circulating since mid-June about Egypt acquiring a Russian super-defense system to secure its coasts and gas fields in the Mediterranean.

In 2015, Egypt signed contracts with Russia to buy $3.5 billion worth of arms, to be progressively handed over.

The Bastion system has the ability to protect over 600 kilometers (373 miles) of the coast and secure a sea area about 100,000 square kilometers (38,600 square miles) and is armed with vertical launch platforms with a total set of 36 rockets.

Not only did Egypt conclude deals with Moscow to arm the Egyptian navy, but it also plans to sign a contract with Italy for the same purpose. Italian newspaper La Repubblica reported June 12 that Cairo plans to sign with Italy the largest ever military deal with a European country worth about $10 million euros ($11.2 million).

The Italian newspaper asserted that the major Egypt-Italy deal includes two Bergamini-class FREMM frigates, in addition to four other frigates that will be built explicitly for Egypt.

On June 20, Egyptian President Abdel Fattah al-Sisi charged the Egyptian army to be ready to carry out any necessitated operation in Libya to protect its national security, during his visit to the army forces at a base near Egypt western border, following an increasing Turkish military action in western Libya.

Another Egyptian-Spanish naval training took place on June 25 in the Red Sea. Egyptian military spokesman Col. Tamer al-Rifai said that the training “is one of the specific combat exercises that contribute to achieving cooperation between the marine formations to confront threats and hostilities.”

Meantime, Israel has expressed its anxieties about Egypt boosting the capabilities of its navy, as Israeli media reported, most prominently Israel Defense magazine that published an article in May, saying, “The Egyptian navy is improving at a secret and very rapid pace,” explaining that the Israeli navy is not prepared to reveal the move it will take to deal with this alarming development.

Egyptian Maj. Gen. Nasr Salem, a military expert, and adviser at the Nasser Higher Military Academy revealed, “The Egyptian army follows a policy of deterrence, which depends on the principle of preparing for war, even if it does not aspire to fight — that is, equip itself with force, arm and display its strength in joint exercises until its enemies retreat.”

He added, “The Egyptian navy is ranked globally in terms of strength, armament, and personnel, and it is mandated to guard Egypt’s wealth in the Mediterranean and the Red Sea and defend gas exploration projects.”

“there is no good reason for any country to be disturbed by strengthening and arming the Egyptian navy because the Egyptian creed is to defense and not attack.” Maj. Gen. Nasr Salem noted

Maj. Gen. Salem also noted, “The Egyptian navy has strengthened itself in position to meet the grown challenges Egypt faces within the Mediterranean, namely the threats by hostile countries.”

He emphasized that “there is no good reason for any country to be disturbed by strengthening and arming the Egyptian navy because the Egyptian creed is to defense and not attack.”

Maj. Gen. Salem expects that the Egyptian navy’s ranking would improve during the next year due to its increased armament and forthcoming major arms deals.

Gen. Yahya al-Kadwani, a member of the parliamentary Defense and National Security Committee, stated out, “Egypt faces escalating regional threats that have clearly emerged since 2011 after a number of neighboring countries such as Libya and Syria collapsed, as well as in 2013, after the Muslim Brotherhood’s rule ended. Those countries’ extremist groups have been waiting out the storm in Egypt, so the Egyptian army — chargeable for protecting the country — acknowledged these challenges and worked to strengthen its armament build-up to answer those threats.”

He added, “Such challenges were clear after the major Turkish aggression against Libya and the explicit threat to the Egyptian borders, so the state decided to back the army — especially the navy — with all weapons and training advancement.”

Gen. Kadwani noted that Egypt’s military strength guarantees the stability of the region as a whole and protects the Arab countries from a growing Turkish expansionist ambition, emphasizing that Egypt — under Sisi’s reign — relied on a policy of diversifying arms sources so that it would possess the capacity and freedom to advance the Egyptian army.