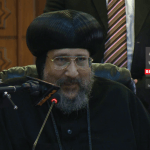 Bishop Anba Ermia | That Is No Longer ~ Beautiful Egypt #348

That is no Longer | After we talked about the meaning of freedom in relation to humans in the previous article, it is a must that we explain that freedom in itself isn’t evil, but man’s usage of freedom is what defines its effect on humanity whether good or evil. As God- Glory to His name- grants man all goodness.

That is no Longer | The Right To Live

God’s commandments carried freedom within and granted everything to teach and guide man to be able to achieve his benefit and peace without any obligation. The man had the choice to obey or refuse it; in both cases, he is the one who undertakes the consequences of his decision. As for an example the first crime known to humanity, as God warned the killer brother from the consequences of his deed: “Why are you angry? And why has your countenance fallen? If you do well, will you not be accepted? And if you do not do well, sin lies at the door. And its desire is for you, but you should rule over it.” Unfortunately, the brother chose to unleash his feelings of anger and killed his brother. Since then freedom has had two ways: the first; that man obeys the commandments of God with his free will and realizes that it is for his own benefit. The second; is to mix his freedom with his deadly desire: “You will be like God”. No wonder that man tries to control the fate of his fellow men, by issuing judgments without caring for their freedom or human values. This is the bad usage of freedom mixed with man’s looking forward to becoming like God!! Unfortunately, that was what the shameful pages of the history of the world have witnessed; when a man tried to control his fellow men and their right to live!!

That is no Longer | Nero

Historians mentioned that Nero was known for his genius and intelligence since his childhood, nevertheless, his strong desire to control humans, made him the worst tyrant known in history!

He unleashed all his anger on Christians and persecuted them severely, as he killed large numbers throughout the Roman Empire. Moreover, Nero persecuted the Jews; killing their chief of priests, ordering their death, and destroying Jerusalem.

His murders even extended to his own family!! He killed his brother from his father, then his mother!!! He also killed his virtuous wife due to his relation with another, whom he killed later on as well!! That was why the people revolted against him, however, he oppressed their strife, tortured, and killed those who fueled it. As he loved himself so much, he ordered people to make him statues, and pictures to be placed at public squares and on the currency.

That is no Longer | Armenians Genocide

On 24/4/1915 a huge number of thinkers, public figures, prominent Armenians, and clergymen were arrested and executed at the city squares. That was followed by the eviction of Armenians from their cities and villages on “Death Trips”. Researchers estimated the number of causalities between one and one and a half million people!!!

That is no Longer | The Holocaust

Besides one of the most famous massacres known as the Holocaust; which was the outcome of the Nazism ideology that aimed to control and rule the world, by finding a party where Germans unite, to be able to achieve what they have lost during the First World War as well as achieving their dream to own a huge empire in Eastern Europe.

The Nazis tried to destroy all those who were against their beliefs: they expelled the Jews from the cultural facilities; they set fire to the works of the great German literary figures in a celebration named “the festival of burning books”.

Then they started to conquest other neighboring countries: they invaded Poland, Norway, Denmark, Netherlands, Belgium, Luxemburg, and the Soviet Union; when the Second World War broke out, leaving a large number of casualties that exceeded sixty-two million people from civilians and military in the world (half of them were civilians!!). Besides tens of millions injured and deformed!!!

That is no Longer | You will be like God

Those massacres and wars were no longer a method to express the false freedom that seeks to control the lives of people, but it took a new modern formation; as man sought to own knowledge and modern technologies which allow him to gather data and information about each individual, so he can achieve his inflamed desire: “You will be like God”!!! And out of that desire; to control over human thoughts, beliefs, and affiliations.