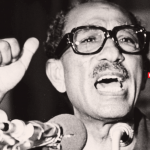 “Egypt is not a country we live in but a country that lives within us,” He often said.

Please join me in tuning into Metropolitan Serapion testimony of what took place on that day [Start 24:25].

On September 7th, 1981, Sadat declared that he was annulling a 1971 government decree “appointing” Pope Shenouda, with whom he has had a running feud for many years, as the patriarch of the 5 million Egyptian Copts at that time. Sadat accused him of wanting to become a “political leader” for the Christians and to “achieve certain personal objectives,” which he did not name. Pope Shenouda was banished by Sadat to an ancient desert monastery “Saint Bishoy Monastery”. However, the Christians of Egypt and many leaders of Egypt’s Coptic Church continued to consider Pope Shenouda III their spiritual head despite President Anwar Sadat’s announcement to withdraw state recognition of the patriarch, whom Sadat accused of trying to be too much of a political figure. H. H. Pope Shenouda III continued to conduct his duties from his desert monastery: ecclesiastically, Sadat’s decision was ineffective. Sadat was assassinated a month later, on 6 October 1981, by Islamic extremists, and in January 1985 Pope Shenouda III was fully reinstated by Sadat’s successor, Hosni Mubarak.

Love Your Enemies Through Good Deeds and Prayer

“But I say to you, Love your enemies and pray for those who persecute you, so that you may be sons of your Father who is in heaven. For he makes his sun rise on the evil and on the good, and sends rain on the just and on the unjust. ” Matthew 5:43-45 His Holiness was a living example of loving your enemy. He was a religious thinker and a charismatic leader, known for his sense of humor. He is the author of many books, he gave weekly lectures, on Wednesday, for 30 years.

“Egypt is not a country we live in but a country that lives within us,” he often said. May Christ our True God grant to His Beloved Servant H. H. Pope Shenouda III eternal rest and may the Lord’s radiant light shine upon him and may his memory be eternal!

Delivered to you by COPTICNN™ | Coptic News Network on 2020-07-22 from Los Angelos, United States