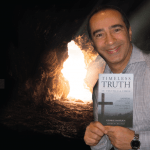 The nature of truth is crucial to the Christian faith.

The nature of truth is crucial to the Christian faith. Not only does Christianity claim there is absolute truth (truth for everyone, everywhere, at all times), but it insists that truth about the world (reality) is that which corresponds to the way things really are. For example, the statement “God exists” means that there really is a God outside the

Truth is “telling it like it is.” This correspondence applies to abstract realities as well as actual ones. There are mathematical truths. There are also truths about ideas. In each case there is a reality, and truth accurately expresses it.

Do All Religions Worship the Same God?

Often the analogy is used of people taking different paths up the same mountain, but all arriving at the same summit. This is the viewpoint known as religious pluralism.

Let us examine the differences between Buddhism, Islam, and Christianity, with regard to their teaching concerning salvation.

These religious claims are contradictory to one another

Let’s see what the majority of Americans believe?

According to Chuck Colson, “Why Christians Are Losing the Culture War, 72% of Americans believe in this statement: “There is no such thing as absolute truth; two people could define truth in totally conflicting ways, but both could still be correct.”

The assumption that truth is relative has infiltrated almost every facet of our society:

Truth is reduced to personal preference; what’s true is what works for you. This may be “true for you but not for me” Moral Relativists condemn those who seek to impose their morality on others. Yet they, themselves, seek to impose their relativistic morality on others. Why should the moral relativist, then, complain if someone took a hammer to his car? No reality is contingent upon our view of it

The bottom line is that Truth cannot be relative, if it is then it is not truth! If truth actually is relative, then so is the statement that truth is relative, and therefore it need not be believed by anyone.

There are multiple arrays of definitions of the “Truth”, to share a few;

Truth by definition is the way things really are, the true or actual state of a matter. It is conformity with fact or reality. For example, the sky is blue. While people may argue what shade of blue the sky is, the statement remains true. For our statements, in order to be true, must conform to a reality that lies outside each of us

Truth is also consistent; not contradictory. For example, if we asked three people what 2 + 2 is and they come up with three different answers, what we may know is that at the most one is correct and the other two are wrong. Maybe even all three are wrong, but no more than one is right. Error is broad (2+2=5, 2+2=6, etc.), but the truth is narrow.

Consequences of the Truth

In the second part in this series, we will consider what is Pluralism & Relativism.

Delivered to you by COPTICNN™ | Coptic News Network on 2020-08-09 from California, United States of America

George Bassilios is an apologetics professor (defending the Christian faith). He has been in this ministry for over 15 years. George is the son of the late Father Bassilios Bassilios, priest of El Botrosiya Church in Cairo.

He is a prominent speaker and lecturer in theology and apologetics. He appears on various Christian television programs discussing the truthfulness and relevance of Christianity.