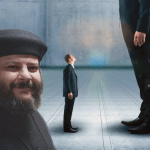 I’ve been thinking a lot about the story of David & Goliath. And if you’re the type that loves epic stories, read 1 Samuel 17. David, the boy wonder; faithful, confident and fearless in one corner and Goliath the fear monger, the intimidator, the arrogant GIANT in the other…don’t forget the king, “You have no chance David;”(v33) and don’t forget his older brother, “just go back to caring for your few sheep;”(v28) and don’t forget the full body armor that he forfeit because it was just too heavy for him to carry (v38-9).

David was fighting against one who was armored from head to toe (v5-7), towering at a minimum of 6 foot 9 inches (v4). David’s battle was not just a battle of brawn, but that of mental, physical and spiritual challenges…yet David was unmoved, he was unshaken. In the prior chapter (16), he had just been anointed King (per God’s orders) at the hand of Samuel the Priest. The Spirit of God was upon David. And David knew it.

“Who is your Goliath?” is no longer a question to be asked, rather with confidence and boldness, we should declare, Who, the Lord our God is!Fr. Gregory Saroufeem Pastoral Letter

The story of David was 1000 years before the birth of our Lord Jesus Christ. Yet, this story is just as practical today as when it happened 3000 yrs ago. Who is your Goliath? Take a moment and ask yourself, “who is MY Goliath?” We all have this giant, loud, obnoxious crux; there is no solution, there is no way out, there is no way to get around. The crowds are against us, the tools are limited and the support of those closest to us are just out of touch. Who is Goliath in your life? Who?

Our walk in this life, by all means tests every ounce of our patience, strengths, emotions and ultimately our very own faith. Faith in God, faith in each other & faith in ourselves. But we forget that trials and/or tests are NOT the end to our journey, rather they are the point in which we can define who we are. David was a kid going to fight Goliath, and came out a legend. He was a shepherd boy going to fight a beast, and came out the leader of the king’s army (the fold). He was everything that deemed him a loser before he actually fought. But he fought. David, the kid, fought. Why?

David wasn’t defined by his surroundings, rather by His surrounding. God defined David far different than anyone that David encountered. From his very own father, to his brothers, to the strangers, to his very own enemies. They saw mere flesh. God saw the heart, his heart….His heart.(1 Samuel 13:14).

You were once anointed too. A different anointing than that of David. Your baptism gave you belonging. Your baptism defined you to be more than just mere flesh and bone, but Spirit, His Spirit. Our Lord walked the way of the Cross, carried it for you and me. Past the crowds, alone and abandoned by His very own. Yet He walked on. The Cross didn’t define our Lord, it was a means to conquer that which bound His creation. And in turn, the Cross was defined to be a symbol of power, the power of God (1 Corinthians 1:18). And when our Lord resurrected that Sunday, we resurrected. That’s what your baptism, your anointing means. We took on His image, in His dying and resurrecting from the dead. The Spirit of God is upon you, just as it was upon David.

Who is your Goliath? Be strong, stand firm and faithful in the Lord your God.

“Who is your Goliath?” is no longer a question to be asked, rather with confidence and boldness, we should declare, Who, the Lord our God is!

The Whole Armor of God

14 Stand therefore, having girded your waist with truth, having put on the breastplate of righteousness, 15 and having shod your feet with the preparation of the gospel of peace; 16 above all, taking the shield of faith with which you will be able to quench all the fiery darts of the wicked one. 17 And take the helmet of salvation, and the sword of the Spirit, which is the word of God; 18 praying always with all prayer and supplication in the Spirit, being watchful to this end with all perseverance and supplication for all the saints—

Delivered to you by COPTICNN™ | Coptic News Network on 2020-08-13 from New York, United States