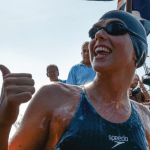 An Australian marathon swimmer on Sunday became the second woman to break the men’s record for number of Channel crossings — and avoided new UK quarantine rules on French arrivals on her return.

“I feel so elated to have finished that swim and to surpass the men’s world record. Australian swimmer Chloe McCardel said.

Chloe McCardel, from Sydney, completed her 35th swim across the world’s busiest shipping lane after emerging on the northern French shoreline in the early hours of Sunday.

The 35-year-old said she had been given the all-clear by UK coastguards that she would not have to self-isolate on her return to England later in the day. Britain imposed a 14-day quarantine rule on all travellers from France and several other countries from early Saturday, following a surge in coronavirus cases on the continent.

McCardel, whose previous feats include the world’s longest unassisted ocean swim in 2014, finished her latest 21-mile Channel crossing in 10 hours and 40 minutes. It was her fourth swim across the waterway in the past 16 days.

Briton Kevin Murphy holds the men’s record of 34 cross-Channel swims, while the overall record remains the 43 crossings completed by Alison Streeter, dubbed the “Queen of the English Channel”. “I’m so happy to have finished my 35th crossing,” McCardel said. “I feel so elated to have finished that swim and to surpass the men’s world record. “It was a harder swim that I imagined… There are definite aches and pains, so it was a tough day in the office but super happy to finally hit 35.”

Chloë McCardel is pushing the boundaries of marathon swimming and what the human mind and body can achieve. Described as the greatest endurance athlete on the planet, the greatest ultra-marathon swimmer in history, an inspiration and role model, Chloë aims to achieve the impossible.

In 2015, Chloë was the first Australian to complete a triple non-stop crossing of the English Channel. Only three other ultra-marathon swimmers have completed a triple non-stop crossing of the English Channel, which were completed over 27 years ago. In 2014, Chloë set the World Record for the longest ratified unassisted ocean swim of 124.4km in 41.5 hours. This was completed in the Bahamas between South Eleuthera Island to Nassau. Chloë trains in water temperatures as low as 11°C for up to six hours; completes overnight training swims of up to 20 hours in 15°C, with 3°C air temperature; and distances of 110-140km in a week. Training also includes pool training equivalent to a male 1,500m Olympic-level swimmer.

Delivered to you by COPTICNN™ | Coptic News Network on 2020-08-16 from London, United Kingdom