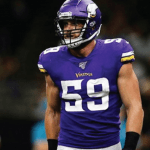 Minnesota Vikings linebacker Cameron Smith announced on Saturday that he needs to have open heart surgery that will end his 2020 season. Smith only found out he needed surgery after testing positive for COVID-19 and undergoing further testing as a result. The surgery will fix an aortic valve Smith was born with that led to what he described as a “severely enlarged” heart.

In his Instagram post, Cameron Smith said the positive COVID test was a blessing because his heart would not have lasted much longer.

“The Lord works in mysterious ways, but I could really feel him on this one!” Cameron Smith wrote.

“There is a surgery that will allow me to continue to play as soon as I am healed and cleared and I didn’t think twice about going with that one,” he said Saturday. “By no means am I ready to be done playing football, there is still so much more I want to accomplish on the field.”

“Man this is hard to read. Prayers up for you brotha,” said Vikings running back Alexander Mattison.

“Thank god they found out. Blessed to have you on this team and in our group,” wrote Vikings co-defensive coordinator and linebackers coach Adam Zimmer.

All the messages have “given me strength beyond belief,” Smith wrote on Sunday. He continued to say, ⁣” I’m all smiles over here and I wouldn’t be this way without the lord and my support system! I’ll keep everyone as updated as possible. I’m coming out on the other side stronger than ever.”

“I just want to say thank you to everyone for all of the support I have received over the last 24 hours, it means more to me than most of you may know! I also have realized how many people have been affected in some way by BAV and all of you that reached out to share your stories has given me strength beyond belief! ⁣ ⁣ Bumps in the road are apart of life, but how you attack them is all that really matters. You can coast through and land safely or pin that son of a gun and launch off that bump as if it was only there to put you further ahead.⁣ ⁣ I’m all smiles over here and I wouldn’t be this way with out the lord and my support system! I’ll keep everyone as updated as possible. I’m coming out on the other side stronger than ever” Cameron Smith wrote on his Instagram Account.

Although this will, unfortunately, end his 2020 play season, it is a blessing that he found this as his heart is critically enlarged and wouldn’t have lasted much longer.

A four-year starter at USC, Smith was selected by the Vikings in the fifth round of the 2019 NFL Draft. He appeared in five games for Minnesota as a rookie last season, recording eight tackles. And he has every intention of continuing his football career once he has recovered from the surgery.

Please join us in praying for Cameron Smith.

Delivered to you by COPTICNN™ | Coptic News Network on 2020-08-08 from Minnesota, United States