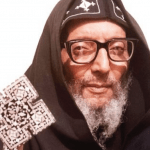 The beloved servant and gifted deacon, “Soliman Rizk”, was born on January 23, 1923. Since his youth and he loved prayer, living the life of a monk prior to his tonsuring and continuing in the monastic life following his consecration as bishop. He was prepared for monasticism as he was always fond of stillness and silence. He was prepared for it given his solitary and ascetic nature.

“…there is no servant without sin, nor master without forgiveness.” Bishop Mina of St. Mina Monastery

Monasticism did not teach him stillness and silence, but it did make manifest the ascetic and still nature of his inner heart. He prepared for monasticism, in his persistence in praises and prayers during his time as a blessed youth and servant in Tanta. There also in Tanta, he learned [received] the rite of psalmody from Cantor Saleh, developing a love for it and was consistent in its chanting thereafter. And like every man of the rite, he loved prayer.

At the Church of the Virgin in the District of Sagha, where he led the prayer meetings leaving a deep impression on his fellow students. And at many times he would be heard chanting in a melodious tone his favourite verse “…there is no servant without sin, nor master without forgiveness.” Besides his leadership in the prayer and praises meetings and his love for hymns and psalmody; he served in Sunday School and in the local villages and during his personal time, he was leading others to repentance. While he was in Tanta, he served with Dr. Talaat Abdo-Henen who was also one of the servants of Giza.

As such, he continued in his career consecrating his life by serving the Lord and when he reached the age of twenty-seven years old, he was already dedicating his entire time to God. And here would begin the second stage of his life – a life of consecration.

In Giza he was engaged in education and outreach, distributing the Sunday School lessons and curricula to the poor in every branch of service and to each of those regions which were filled with his spiritual words in return. Likewise, in Tanta, he would be introduced to the service leadership there: Hegumen Makari El-Suryani (later known as H.G. Bishop Samuel); Hegumen Salib Sorial (priest of the Church of St. Mark); Eng. Michel Khalil Bishay (later known as H.G. Bishop Domadios) and Eng. Yassa Hanna, working alongside them immersed in service and outreach.

Brother Soliman (Bishop Mina St. Mina) was not known as the ‘gifted servant’ for his sermons, instead, he was known for the individual work he carried out. In his silent meetings with the youth, in their love and desire for the Lord and in leading them towards repentance. All of this would be done in secret which complimented his lowly spirit that did not concern itself with outer appearances, carrying out its work in quiet. While no one sense what was taking place they did witness the visible fruits of his work; his service would thrive, his prayers for people would abound, and the LORD would bless his work. His ministry in the poor villages, neighbourhoods and surrounding areas would also grow. During his time in service and education, he never forsook prayer and the chanting of the Psalmody, but rather continued in them, especially during his time at the Church of St. Mina in Old Cairo, where the “worshipping-monk-servant” Hegumen Mina the Solitary resided at the time (H.H. Pope Kyrillos VI, may God repose his soul).

The beloved deacon sought refuge in prayer and psalmody, and in that priest, who loved prayer and psalmody, committing himself to the liturgies and vespers services. After some time, he would later become the deacon serving Hegumen Mina the Solitary in his place of hermitage in Old Cairo; and there the youth of his service would meet and be introduced to the latter.

In May 1959, when Hegumen Mina the Solitary became Patriarch under the name of Pope Kyrillos the Sixth; Br. Soliman was appointed as his personal deacon and student, and here began the third stage of his life in service.

With him at the secretariat is H.H. Pope Kyrillos the Sixth, may God repose his soul, and there we begin to meet that cheerful, quiet and lowly youth who worked alongside his master with all sincerity and faithfulness. In silence, simplicity, and righteous conduct and as an intermediary between the Pope and the people.

It was at this stage that he began his public ministry and in spite of that environment of the patriarchate with all of its many meetings and events, he maintained his peace and silence. At the same time, he would attend every vespers service [“Raising of Incense”] and liturgy with the Pope, responding in the diaconate manner. Receiving the Holy Mysteries and chanting the Psalmody with him and would come to adopt from him the habit of praying daily liturgies, becoming an established ritual throughout his life.

During this time, H.H. Pope Kyrillos was commencing the initial and preparatory work for the founding of the monastery of St. Mina in the desert of Mariout, near the ancient monastery which is under the jurisdiction of the High Commission of Antiquities. It was at this time that he would send his deacon Soliman to assume its responsibilities.

On September 2, 1964, the fourth stage of his life begins with his tonsuring as a monk under the monastery by the name of Monk Mina St. Mina.

When Hegumen Matthias El-Suryani (later H.G. Bishop Domadios) left his managerial role at the monastery, the monk Mina received the grace of the priesthood and was appointed by the Pope as the monastery’s secretary as well as vicar to the patriarchate in Alexandria.

In 1972 when the episcopal See of Damietta became vacant, he was offered by the Pope the episcopacy, but refused and returned back to the monastery where he was later appointed abbot.

In addition to this, was the monastic development. From monks taken from other monasteries to develop the monastery, to the tonsuring of 57 monks therein. He requested of me to continue in the tonsuring of monks in the monastery and God willing the number of monks will increase to 60 or more in the following weeks. The number continues to grow in spite of his insistence on the period of the novice being no less than approximately three years, as it was during his time.

He laid down spiritual rules for the monks to follow. Among them was the attendance of the Midnight Hour Prayers, the Vespers Hour and the Psalmody. Also, they were to attend to the hearing of the “Desert Fathers” during their communal meal. Furthermore, it would be rare practice to ordain monks into the clerical ranks and only minimal visits were allowed into the world in cases of urgency and necessity. As Father Confessor of the monastery, he provided them with spiritual guidance and with special care he cared for each one of them. He was keen on preserving the peace of the monastery by prohibiting visits during Great Lent.

Due to his spiritual and developmental work, he was ordained as bishop of the monastery on May 25, 1980. On January 31, 1996, during the feast of St. Antony, he was among three other abbots that day to be clothed with the Holy Eskeem [Great Schema]. Concerning this occasion, Bishop Mina wrote to his sons the monks a pastoral letter containing many spiritual monastic instructions for their benefit. From the greatest things he had offered them was his example among them as a spiritual person who was diligent in his life.

Bishop Mina was peaceful and meek; silent, speaking only when necessary and never sinning with his tongue. Bishop Mina was an ascetic who was committed to the fasts even during times of illnesses. When he was ill, he continued in his insistence to stand during prayer even if he was praying for [over] someone else. He was a man of prayer, discreet in his prayer life and in the rites of the Church.

Bishop Mina was very compassionate towards people and gave generously. He continued to maintain his inner peace despite his illness and of his own awareness of the poor state of his health which increasingly worsened towards the last years of his life. Yet he would not permit any of this, nor use it as a reason, to lessen from his worship. He was a humble person and did not seek praise for the work done in the monastery and he respected religious leaders with great respect.

His spirituality caused many to confess under him and to seek his guidance. Among his spiritual children in the confession were some of the bishops as well as many of the priests. They benefitted from his guidance, blessings, and his righteous example.

On Dec 11, 1996, after a long struggle with an illness that manifested itself in a wondrous endurance, he reposed in the Lord. His departure resonated emotionally and sorrowfully with those who felt that he had left a void.

May God repose his pure soul in the Paradise of Joy.

He lived for approximately 74 years and a month and a half.

He spent more than 32 years as a monk, more than 16 as bishop, and 46 years since his consecration into service.

May God benefit us with his blessings, interceding for us in that region of the living.