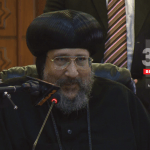 The Second Heaven | In a few days, the Coptic Orthodox Church is celebrating the Feast of Our Lady Virgin, which falls on the twenty-second of August. When the name of “The Lady Virgin” is mentioned, and especially in Egypt, feelings of reverence, respect and honor flow into the hearts of all Egyptians for their overwhelming love for her.

Feast of the Lady Virgin

The story of the “Feast of the Lady Virgin” begins with the Apostle Fathers, the disciples of Christ, after her departure on the twenty-first of Toba (30/1), as Apostle Thomas was not present with the other apostles on that day, but on his way returning from India, he saw the angels carrying the body of the Lady Virgin up to heaven. Upon his return, he asked the rest of the apostles about her, and they informed him of her departure, but he asked to show him her grave; when they went there, they did not find her blessed body! He told them what he saw. The apostles did nothing but offering a fast to God, began on 1st of Mesra (7/8), in order for God to allow them to see that majestic scene and to be blessed by her body, and they remained fasting until God fulfilled their desire on the sixteenth of Mesra, which falls on (22/ 8); since then, it has become a feast of the Lady Virgin.

“At Your right hand stands the queen.” Prophet David stated

The life of the Lady Virgin was not a smoothly going one, but was filled with difficulties and hardships: At the age of three, she left her family to serve in the temple, and when she became twelve, she left the temple to go with the reverent old man, Joseph the Carpenter, whom heaven had chosen to take care of her, then she gave birth to her child in a manger! Then King Herod raged a war against her Son for he feared to lose his kingship; so, she fled to Egypt along an arduous journey full of dangers and toils. The severest distress, which was a sword piercing through her soul, was seeing her only Son being subjected to the cruelest insults and pain on the cross and dying. Moreover, the cruelty of the Jews did not stop even after her departure! Someone tried to trespass on her coffin, yet his arms got separated from his body! Through the prayers of the Apostle Fathers, the man’s arms -after getting regretful in tears- returned intact.

In a reading of the Lady Virgin’s icon, we find her drawn to the right of Baby Jesus, just as Prophet David stated: “At Your right hand stands the queen.” She is drawn with a luminous aureole surrounding her head, referring to her purity and saintliness, and this differs from the aureole of her Son which is extended to cover His shoulders. Three large stars are drawn: one on her head and two on her shoulders as a symbol of her perpetual virginity, for she is the virgin who gave birth without a man, and the one who remained a virgin after giving birth, through a miracle that has never happened and will never be repeated throughout human history, about which Isaiah the Prophet prophesied: “Therefore the Lord Himself will give you a sign: Behold, the virgin shall conceive and bear a Son, and shall call His name Immanuel.”

In her icon, the Cherubs (angels) shall be drawn around her, because the power of God overshadows her, as the angel foretold her: “Do not be afraid, Mary, for you have found favor with God.”, while in the Quran, it is said: “Behold! the angels said: “O Mary! Allah hath chosen thee and purified thee- chosen thee above the women of all nations.” The Cherubs in the icon carry the cross and the tools of crucifixion, indicating that this Child has come into the world for the sake of redemption. As for her clothes, they are blue and have many stars, as she is called “the second heaven”, and the many stars on her clothes also indicate the multiplicity of her virtues. As for her red dress, it is a symbol of the pain she suffered, while the white dress is a symbol for her purity. She is the one about whom King Solomon said: “Many daughters have done well, but you excel them all.”

In the icon: her hands point to Lord Christ to direct human eyes and understanding to His holy Person, and her head is tilted with her ear in great modesty towards the mouth of Christ and her eyes are always wide, indicating her constant contemplation of God’s words and deeds with her. It was said: “But Mary kept all these things and pondered them in her heart”.

Happy many returns to all of you. We beseech God to lift the plague from the world and preserve Egypt in peace and goodness, through the intercessions of the Lady Virgin who honored and blessed Egypt when the Holy Family set foot on the Egyptian lands, and lived there for nearly three and a half years.