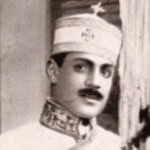 Today we celebrate Habib Girgis’ long career as a Coptic Orthodox educator. He was a candle that keeps lighting the dark. August 21 marked the anniversary of his departure from our world in 1951, when he was 75 years old. In 2013 St. Habib became the most recent figure to be granted sainthood in the Coptic Orthodox Church

This article looks at Habib Girgis’ inspirational life and the Coptic Church’s educational improvement following from the work he began.

By the mid-nineteenth century, the Coptic Orthodox Church was in a state of profound vulnerability that tore at the core foundation of Coptic identity. Religious education and knowledge had decayed so far that, at the time of the restoration of the Clerical Seminary in 1893, they could not find a religion teacher after the sickness of Hegumenos Philotheos Ibrahim. For three years, students remained without religion courses.

As well, in the churches, there were no preachers. Homilies were read from printed books or manuscripts. Other denominations began to invade the church.

“Then, God said, ‘Let there be light,’ and there was light.” And the light was Habib Girgis. In his last year at the seminary, still a student himself, he was chosen to teach his colleagues. From this early start, he devoted his life to elevating religious and theological education. He became a pioneer of Coptic religious and theological education—a Copt whose vision and legacy live to shape his community to this very day.

We will follow Habib Girgis’ six-decade-long vocation as an educator, reformer, dean of a theological college, and pioneer of the Sunday School Movement in Egypt—including his publications and a cache of newly discovered texts from the Coptic Orthodox Archives in Cairo. It details Habib Girgis’s agenda for educational reform in the Coptic Church from youth to old age and his effort among the villagers of Upper Egypt. We will recount Habib Girgis’s struggle to implement his vision of a Coptic identity forged through education, and in the face of an antagonistic milieu.

Habib Girgis was born in Cairo in 1876. While still a child, his father died in 1882. His mother furnished him with a religious upbringing. He entered the Copts Secondary School in the Klot Bek district of Cairo. He received mentorship from Hegumenos Philotheos Ibrahim, who was by then a very old man crushed by sickness. He was the first student chosen to enroll in the seminary when it was restored in 1893. He was the highest-ranking graduate of the seminary’s first graduating class of 1898. And there he began teaching.

He became the first professor of theology and homiletics in the seminary. He rose to the rank of Archdeacon and throughout his vocation in Egypt transformed theological education. He excelled in preaching and teaching.But this was not all: he travelled to raise funds, he wrote books and founded magazines, he raised new educational institutions and founded the Sunday schools. With all this, he found time to write new songs of praise.

Habib Girgis was cherished very much by four patriarchs: H.H. Pope Kyrillos VI, H.H. Pope Yohannes IX X, H.H. Pope Makarius III, and H.H. Pope Yussab II as well as all the Metropolitans, and bishops, many of whom were his disciples.

Habib Girgis bought the seminary land in Mahmasha and constructed a magnificent building. It was he who founded the School for Cantors attached to the seminary. He also built a church for the seminary, which is now St Mary Church in Mahmasha. He traveled throughout Egypt raising funds for the seminary. He convinced his friends to donate endowments, among them the philanthropist and virtuous lady Roma Athanasius, who endowed 365 acres of land.

He founded many societies. Society of al-Nasha’a [Upbringing] in Haret al-Sakkayeen was one of the popular societies in which he preached. He also preached in al-Iman [Faith] Coptic Society. He was the founder of that society and transferred it to al-Faggala. He was also the founder of al-Mahaba [Love] Society for Childhood Education. He remained an active member of the Al-Khaireya Coptic Society and was contributory in establishing Friends of the Holy Bible Society.

He proudly endowed many organizations including the Society of Church Soldiers, Society for Propagation of the Word of Salvation, and the Alumni Society. These societies operated in 84 centers for the ministry of the Word. In no time, they established churches in al-Suff, al-Quanater al-Khaireya, Ain Shams, Almaza, and other locations. These became large fields of ministry for the seminary students.

He published his book The Seminary Between Past and Present. Throughout his vocation in Egypt he worked to transform theological education. He revived patristic theology. He started courses in logic, philosophy, psychology, Hebrew, and Greek. He also expanded emphasis on the study of Arabic, English, Coptic, history, and church hymns, which was taught by al-Mu’allim Mikhail, the chief cantor of the church. He composed over 100 songs inspired by the theology and hymnology of the Coptic Orthodox Church.

In 1918 he was appointed Principal (Director) of the Seminary by H.H. Pope Kyrillos V. He continued in this capacity 33 years.

In 1900 he established Sunday Schools and designed the curriculum. This very successful movement continues to this day.

Habib Girgis also paid attention to journalism. He published his famous magazine, al-Karma. Its first issue was in 1907, and he was assisted in its production by the famous lawyer Gabriel Bek al-Tukhi, the famous judge Nassif Bek al-Tukhi, Archon Professor Takla Rizk who taught religion and science at the seminary, Professor Yassa Abdel Messiah who taught Greek and rites at the seminary and was a librarian at the Coptic Museum, Professor Simon Silides who taught theology at the seminary, Quossa Bek Girgis, a preacher and writer, Mr. Kamel Girgis, Aziz Bek Marcus, and Dawoud Bek Ghali. It became the best Coptic magazine of its time.

In 1909 he wrote his book, Summary of Faith Fundamentals, in three volumes for elementary schools. It was well-received by teachers and students.

In 1937, he wrote eight new books in a series, Orthodox Christian Principles, to suit elementary and secondary schools. Later he wrote three books in another series, Precious Treasure of Holy History. These became textbooks in both government and Coptic schools. He also communicated with authorities in the Ministry of Education to increase attention to religious education.

In 1946 Habib Girgis established the evening seminary for university graduates. Many leaders of Sunday Schools from the Cairo and Giza churches enrolled.

He was cherished by four patriarchs: H.H. Pope Kyrillos V, H.H. Pope Yohannes IX X, H.H. Pope Makarius III, and H.H. Pope Yussab II; together with all Metropolitans, many of whom were his disciples.

The pain and strength of Girgis are seen most clearly near the end of his career, when he said, “Despite efforts that sapped my health and crushed my strength, I did not surrender for one day to anyone who resisted or envied me…. Birds peck only at ripe fruits. I thank God Almighty that, through his grace, despair never penetrated my soul for even one day, but in fact, I constantly smile at the resistances…. It is imperative that we do not fail in doing good, for we shall reap the harvest in due time if we do not weary.”

There were many justifications for the church’s decision. Miraculously, the body of St. Habib Girgis was found intact 43 years after his death (as reported in al-Kiraza Magazine, vol. 22, no. 17, 13 May 1994).

One of the greatest books that celebrate Habib Girgis’s journey was written by His Grace Bishop Suriel. It title: Habib Girgis: Coptic Orthodox Educator and a Light in the Darkness. In 2014, His Grace Bishop Suriel received his Ph.D. degree from Fordham University (New York City), where he wrote his 890-page commentary on the life and legacy of the widely influential Archdeacon. This work marked a breakthrough for the field of Coptic Studies at large and the broader recognition of the beloved saint and reformer.

It was published in 2017 by St Vladimir’s Seminary Press (SVS Press) and is available for purchase at:   Habib Girgis Coptic Orthodox Educator And A Light In The Darkness

His Grace Bishop Suriel also presented a lecture entitled “The Role of St Archdeacon Habib Girgis in the Renaissance of the Alexandrian Coptic Church”. The event had also an exhibition of rare and in some cases never before released photographs linked to the archdeacon. Video of the event is available online here:

At the start of his lecture, His Grace recalled a quote from His Holiness Pope Shenouda III, himself a disciple of Saint Girgis, about the famous Coptic educator. Pope Shenouda said:

“‘The earth was without form, and void, and darkness was on the face of the deep,’ as the Book of Genesis describes. ‘Then, God said, Let there be light, and there was light.’ And the light was Habib Girgis… Habib Girgis will remain across our modern history as the pioneer of religious education in our land. He was not only a teacher but a school, even a university.”

Saint Girgis was a “man who came to bring light to a gloomy situation of confusion and apathy concerning religious and theological education. It was an age where Coptic identity was dangerously endangered.

Saint Habib Girgis was successful in making Copts deliberate thoughtfully about reform and he prompted a reform process. Thanks to his work in the fields of education, publishing, and preaching, many people were motivated by his vision.”   Saint Girgis wished to invigorate the next generation to carry on his legacy, which has already shown in the fruits and prosperity of the Sunday School Movement in and outside Egypt. The seminary education Girgis led continues to run under the leadership of His Holiness Pope Tawadros II at the patriarchate in Cairo and is accessible to men and women seeking a theological education.

We thank God for the saintly life and thriving ministry of the prominent theologian and visionary St. Habib Girgis. Coptic society now reaps the fruits of his various journeys for reformation and revival.

Delivered to you by COPTICNN™ | Coptic News Network on 2020-08-21 from Saskatoon, Canada

Saint Habib Girgis | A Candle That Keeps Lighting The Dark