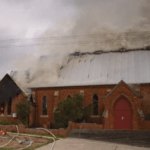 Firefighters were called to the St Paul’s Coptic Orthodox church just before 1 PM on Sunday. The building has sustained significant damage to the church interior including the iconostasis, carpet, icons, altar, and timber roofing. Through God’s grace, no one was hurt or injured in this incident.

It comes just a decade after the church was founded in Bendigo.

The Australian Coptic church congregation is determined to reconstruct the wreckage of their building after it was gutted by a fire on Sunday. They hoped to start restoring its interior as soon as possible. Fr. Moses Curley stated on the church burned incident.

Police say the fire was not suspicious. “At this stage it’s undetermined,” incident controller Tony Hope said. “We don’t have leads towards [the fire being] suspicious, but we need to go through the process.”

He stated the damage suffered was substantial and that the church would be closed. “There is some damage to the structure [and] the brickwork. All the ceiling is destroyed, [there is] damage to the iron on the roof. “In the ceiling space there were pine lining boards that have all been destroyed from the fire, so it’s reached right through to the top of the roof structure.”

Members of the church community were able to access the building once the fire was out to collect some items. One member described the fire as heartbreaking.

Parish Priest Father Moses Curley said the congregation was shocked and saddened by the damage.

The Australian Coptic church congregation is determined to reconstruct the wreckage of their building after it was gutted by a fire on Sunday. Father Curley stated the congregation hoped to start restoring its interior as soon as possible.

He said they believed the building was structurally sound, allowing them to restore it, rather than rebuild, but that was subject to the conclusion of council building surveyors.

Father Moses Curley add it that the congregation was devastated, but also determined to restore and rebuild. “I think the sadness will quickly turn to a more positive reaction of restoration and rebuilding. It’s a resilient community” he said.

A former Anglican church, the church building is more than 100 years old. It has a congregation of about 25 families. A group of now-parishioners bought the building in 2010. It is one of the few Coptic churches in regional Victoria.

The church is over 100 years old and recently received significant damage in a fire possibly caused by a lightning strike.

We estimate that it will take around $1.5 Million to fully restore, but ANYTHING helps (even JUST SHARING this campaign). Even though the congregation will be working with the insurance company to rebuild the church internally, but being a relatively small congregation they could use all the help they can get!

Parish Priest Father Moses Curley and the Church families sincerely appreciate anything anyone is able to share with them.

If you wish to support by donation to help the Bendigo Coptic community rebuild the church, below are the direct banking details of St Paul’s account.

Donations are tax-deductible for Australian.

We pray that our Lord Jesus Christ strengthens and comfort the Parish community and grants them peace and hope to rebuild their beloved Church.

Delivered to you by COPTICNN™ | Coptic News Network on 2020-09-20 from Bendigo, Australia