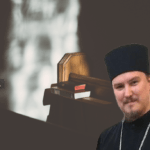 Is Theological Discussion For Everyone? A Reflective Commentary [P2]

In the previous article we delved into St Gregory the Theologian’s 27th Oration, and its challenge to a world obsessed with debate and challenge to the point of making religious enquiry and dialogue a secular and boastful hobby as opposed to a spiritual exercise. Continuing this, we will look at the question of whether theology and its discussion is for everyone and the disservice that promotion of this can do to the faith.

On Theological Discussion | The Who?

The third part of St Gregory’s oration asks ‘who should listen to discussions of theology?’ Many today would claim that anyone serious in their Orthodox faith should be engaged in such discussions and seem to have some obligation to do so. This is a common mind-set online, in which many will make such judgements as “How can you be an Orthodox Christian and not know ___?” about a complex subject, however one must ask whether the old Russian woman in a village who prays 7 times a day, or the Syrian refugee who built the camp’s Church have a weaker faith than the self-appointed Theologian of the Internet.

The idea that we should not discuss things which we cannot understand is his first point, one which is prevalent in Orthodox speaking of the nature of God especially within the Apophatic way. Deacon Daniel Malyon | A Reflective Commentary

St Gregory’s response to the matter is simple. He states that the people who should listen are “those for whom it is a serious undertaking, not just another subject like any other for entertaining small-talk, after the races, the theatre, songs, food, and sex: for there are people who count chatter on theology and clever deployment of arguments as one of their amusements.”

In this way, he sets aside the Faith from academic or Philosophical subjects of conversation in that it is one of deep conviction as opposed to a simple amusement. Theology in this respect becomes a life-long pursuit which is part of both lifestyle and belief, the Orthodoxa and Orthopraxis which are covered in the Liturgical and daily prayers of the Church.

St Gregory finishes the Third part of this oration by examining what aspects can and should be investigated in Theology, explaining that “only aspects within our grasp, and only to the limit of the experience and capacity of our audience” since “our discourses may so oppress and overtax our hearers” in comparison to a heavy load or excessive rain may damage regardless of their motive being positive. This again provides a stark warning and reminder that there are clear boundaries on what can be achieved in Theological discourse.

The idea that we should not discuss things which we cannot understand is his first point, one which is prevalent in Orthodox speaking of the nature of God especially within the Apophatic way. The point of the limits of audience is also important as over complication can often lead one to struggle in their faith in a way which cannot be recovered easily. Again this leads to the reminder that is not a duty of all to engage in senseless discussion of the faith as it can lead to adverse effects even if meant in a positive manner.

On Theological Discussion | The When?

In the fourth part of his Oration, St Gregory follows on from his warning by explaining that he does not seek to discourage proper discussion of Theology but to “its untimely practice” and in cases of theological instruction to “when it goes to excess.” This is a position which all Christians would relate to.

To love theology as an academic field is not in itself something to be criticized or dissuaded, I myself began this study through academics and was brought to the Orthodox faith through this. The problem is when Theology is distorted by this and becomes a hollow field without the stressed importance on the Mystery of faith and the prayerful and practical aspects in its proper understanding.

Sadly, much of this becomes lost during such mediums as social media discussion due to the narcissism and anonymity of an online conversation which takes away from the personal aspect of a long term and accurate education. In this way, much of the nuances and prayerful aspect of learning Theology can take a back stage to simply learning of the subject as though it were any other academic field or simple ‘area of interest’.

This is why any Theological education should come from a deep seeded relationship with one’s spiritual father or through guidance of the Priest in your parish as opposed to something through simple reading or discussion through a computer screen.

On Theological Discussion | The How?

Through the rest of the fourth through sixth sections, St Gregory takes the opportunity to expand on what is the proper means of discourse on the Mystery of the Faith. He speaks of this occurring amongst the community of the faithful instead of placing Theology as part of a wider Philosophical debate, warning that we should “conduct our debates within our frontiers and not be carried away to Egypt or dragged off to Assyria” linking this to the idea that debating the Orthodox Theology amongst those who seek to disprove Christianity would strengthen them my allowing those with no true strength in their profane teachings to “hunt for it in our weaknesses, and for this reason like flies settling on wounds, they settle on our misfortunes-or our mistakes.”

In this, St Gregory makes a clear criticism of Christian infighting and how it does little more than promote the cause of those intending to discredit Christianity for its division. In the same manner he warns of Christians should not divulge the faith as simply an alternative faith to others but keep the words we speak as Venerable so as not to “Prove that we are less reverent than those who worship demons” as “they would rather give their blood than disclose certain words to non-initiates.”

In a modern Christian settling this last point may come as an oddity, especially when we can easily search the scriptures and find many examples of the Apostles proclaiming the faith to those who opposed it. However, in a practical sense we need to remember that the Early Christians and many today still keep many aspects of faith to the faithful only.

We only need to look at the Liturgy to remember the practice of having the unbaptized leave before the Liturgy of the Faithful with the famous words “The Doors, Stand aright” proclaiming that the doors are to be closed to them as they should not be present when the communion rites are performed. St Gregory sees the words of the faith to be as important as any other aspect, and therefore not be profaned through misuse or untimeliness.

On Theological Discussion | The Word

Following this comes a further explanation of the dangers of involving the Christian Faith and its teachings in debate with those who wish to discredit it. To St Gregory, one of the biggest risks of this is the profaning and misappropriation of the faith, as he warns that “if we abuse the terms ourselves, it will be difficult it would be difficult to persuade such people to accept our way of thinking; and if they have a natural inclination to “invent new kinds of evil” how could they resist the evil we offer them?”

This is a common cause of confusion when someone without a proper understanding of something tries to present it and ends up either confusing the matter or presenting a false version of Christianity and producing a ‘straw man’ of the faith of others to attack. We see the invention of such straw men in the modern world in writings such as ‘The God Delusion’ by the Evolutionary Biologist Prof.

Richard Dawkins and others who see themselves as presenting Christianity in their texts when they are in fact presenting a hollow version of Christianity which others have promoted as the full faith. As St Gregory warns, “This is what our Civil War leads to. This is what we achieve by fighting for The Word with greater violence than is pleasing to The Word.”

On Theological Discussion | The Faith

In this manner we see that opening our faith as evidence in a wider debate and discourse without recognizing the fundamental experiential nature of it brings the danger of making it a simple exercise in philosophy, something which strips it down to words and concepts. Instead perhaps St Gregory would want us to know our faith and know of our relationship with God before considering ourselves capable of expressing this to others meaningfully. After all, our service is to bring the world to God, and how better to do this than through being a living icon of Christ.

Deacon Daniel Malyon: Is Theological Discussion For Everyone? A Reflective Commentary [Part 2]


Deacon Daniel is a consecrated deacon of the Coptic Diocese of London, serving at the St Paul's Ministry and St Mary & Pope Kyrillos VI Church. He also works as a philosophy teacher and chaplain at a secondary school in East London.