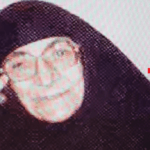 “‘When someone comes to you asking for 10 give them 20, and when they ask for 20 give them 30’” Mother Mariam always suggested

Mother Mariam’s life was a beautiful garden containing many fruits that were borne in due season. Her life was filled with many beautiful virtues, and the closer you approached, the greater your realization was of that hidden treasure that constantly and freely gave. Let’s walk in this garden so that we may enjoy some of her fruits, learn from her, and imitate her ways.

“But rather give alms of such things as you have; then indeed all things are clean to you.” (Luke 11:41)

Since her entrance into the convent, and with Tamav Kyria’s (the abbess) prior knowledge of her gift in her service to the poor; she [Mother Kyria] permitted her to host them in the convent. Initially, she prepared single meals for them in the convent’s courtyard, and there offered them food. When their number began to grow; a number of meals were prepared in the middle of the convent’s courtyard and when the courtyard could no longer accommodate them due to their great number; Tamav Kyria approved for a personal room to be built within the entrance of the convent for Mother Mariam to meet with the poor there to satisfy their needs in food, money, and clothing.

In this manner she continued to serve during the entire period of Tamav Yoanna (the abbess) and when she was bedridden in her cell during the last years of her life; she sent one of the nuns to meet their needs in her place. Mother Mariam greatly respected the poor and called each one by their name saying: ‘Hey Mr. [name of the person]; Hey mother of [name of firstborn]/ (Ms. [name of person])’. Mother always suggested to me saying that ‘When someone comes to you asking for 10 give them 20, and when they ask for 20 give them 30’.

She distributed all she had and left nothing for herself saying, ‘If you live for yourself you die’. Mother Mariam charitably gave in all humility, calling for the individual to receive their blessing. Mother Mariam gave in humility and prayed for the person who received their blessing so that the latter ended up receiving two-fold a blessing: a monetary one and another blessing in his life, for his safety and that of his family.

Her charity was hidden and when she gave to the workers; she gave large amounts such as 25 pounds and to the younger ones 25 cents. She did not limit her charitable work solely to the poor and needy but extended it to others also. She had a merciful heart that felt for others and in this manner, Mother Mariam performed her works of charity towards the nuns and workers.

She felt for them in their times of sickness, weakness, and lengthy hours of labour; visiting their cells numerous times leaving them fruits or something else, and quickly returning back to her cell in an attempt to avoid anyone seeing her.

‘There was a time when I needed to lose weight and decided to pursue a weight loss diet. At the time I was shy and afraid to ask for my own personal diet. However, Mother Mariam in her well-known clairvoyance and great compassion sensed what I felt. She regularly came to my cell which was located in a different building than hers. At the time I was only a young nun, new to monasticism while she was a senior nun.

She brought me fresh vegetables, herbs, fruits, and other food suitable for my diet. She did this in complete silence, and without saying a word returning quickly to her cell. I would feel ashamed before her great love and would find tears rolling down my face.’ -a nun from the convent.

‘Many times, during my service at the gates of the convent I would be caught up by the great number of visitors, going without eating anything the whole day and ending up exhausted. I felt Mother Mariam sense what was going on because she called for me and said, ‘I want to see you right away for an urgent matter, I want you to meet me’.

I found her ready with something quickly fixed for me to eat and did not leave until she made sure I ate it. More importantly, with regards to her compassion, I am not able to put it into words nor describe it; she cared a lot for the workers and each one’s circumstances. She secretly called for each one of them to give them a blessing, whether money or fruit from her personal food.’ -a nun from the convent.

‘I remembered how Mother Mariam sensed what I was going through for she used to call for me to give me some money, and at that time indeed I would be in need of that money and undergoing financial problems, and naturally, I did not tell anyone. I found her calling me, joined my shoulder, and said, ‘Don’t you be afraid, all the problems will be solved, the Lord is with you.’ She confidently talked to me about our Lord and as I took the blessing from her; my face betrayed me with tears flowing down my face, deeply affected by her love, motherhood, and clairvoyance.

These situations regularly occurred with me. What was marvelous was that upon receiving the blessing from her and having spent it afterward, on that same day when there was no more money left to spend, I found her calling for me to give me another blessing. It as if she lived with me and saw what I possessed.’ -a convent worker.

‘When Mother Mariam called for me to give me the blessing she would say, ‘Is this so that if I don’t call for you would not come by? Wait here’. She went into her cell and came back to hand me another blessing telling me, ‘Take more’. It was wondrous how she gave in great humility, making the person in need to feel like she was the poor and lesser one so as to avoid embarrassing anyone.’ -a convent worker.

She was bothered when one of her relatives cooked for her and prepared personal food items such as this particular type of apple which was essential to her diet saying, ‘There is a great financial crisis in the country’ and distributed what she had, leaving nothing behind for herself, and instead asked that they give her money instead of a particular type of food so she is able to give it to the poor.

When misunderstandings arose in her services and especially in her service to the poor; she endured blame and rebuke from some, but it did not affect her, nor did she reply. For her priority and goal was clear which is that of fulfilling the needs of that person in need because she felt their needs. Later she sought out the person who was upset at her to win them over.

Before Mother Mariam’s departure, she knocked on the cell door of one of the nuns and left her an amount of money to be given which she gave a particular poor lady every month. However, the nun was surprised because the amount was equivalent to an eight-month amount and tried returning the rest to her, but she replied, ‘Take them and that’s it’. Two days later and she departed.

On her bed during her last illness, before her departure by hours, she asked to see one of the nuns and said, ‘Call for me Mother [the name of the nun], I have something for her.’ (The nun served one of the secret families Mother Mariam served and received their blessings). She did this because she wanted to check on them and give them their financial assistance before she departed.

One of the nuns had breast cancer and was extracting her recurrent tumors and decided to pass by Mother Mariam’s cell to ask for her prayers before she visited the doctor. She was upset and troubled and Mother Mariam was touched by this, cried, consoled her, and continued to pray for her until the nun returned to the convent. When she came back, she went right away to Mother Mariam’s cell to reassure her that it was only a cyst that was now removed.

Mother Mariam rejoiced, thanked God in prostration three times while the nun tried to prevent her, worried for her health and old age. However, she continued in prostrations of thanksgiving to God and the nun marveled at how great a love Mother Mariam had that was without limits.’

‘Whenever I was going through a hardship, was confused regarding a particular situation, or had a problem; I would go to her and ask for her prayers. Every time God was glorified in a very clear way and the situation ended in peace. For truly she was a refuge and warm embrace to anyone who went to her or asked for her prayers.’ -a nun from the convent.

‘I underwent a difficult situation which I kept to myself and was psychologically distraught. Naturally, Mother Mariam did not know of the situation because I did not tell her. She came to my cell despite how far it was from hers and said, ‘“Do not be afraid, I am with you.”’ Without saying anything else and delving into any sort of explanation; she left me repeating the same verse until my eyes lost sight of her. I felt my spirit greatly lifted and a great grace that aided and supported me.’ -a nun from the convent.

‘I was going through a hardship greater than I can bear and did not reveal this to anyone. I lost my appetite for food and no one knew what I was going through. I heard Mother Mariam outside my cell knocking on my door, begging me to take a piece of fruit and food which she had brought, and she ordered me to eat.

I was surprised because I did not tell anyone and thought no one knew what I was feeling but Mother Mariam sensed what I was going through and embraced me with her love, care, and great kindness. She supported me through verses and her strong prayers until the hardship passed in peace.’ -a nun from the convent.

These situations occurred many times with the nuns, but we are satisfied with listing a few of them here in this simple form.

I am a law graduate and psalter serving in the Diocese of Mississauga, Vancouver and Western Canada. I translate Arabic hagiographies of recently departed Coptic monastic figures. In my journey of discovering the rich faith and heritage of the Church of Alexandria, I am interested in making available in the English language the numerous Arabic biographies of contemporary monks, nuns and figures of the Coptic Orthodox Church to upcoming non-Arabic speaking generations of Copts worldwide.