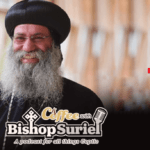 An Interview with Dr. Candace Lukasik and Dr. Michael Akladios

In general, Coptic immigration rose steadily throughout North America, Europe, and Australia in the coming decades. We see a further influx of Copts to the US and Canada after the 2011 revolution in Egypt, fleeing instability and violence.

With hundreds of Coptic Orthodox churches in the United States alone (along with over 90 congregations in Canada), it is estimated that there are over one million Coptic Orthodox Christians in North America. Coptic immigration has so many facets to it, and we obviously cannot cover everything in one episode, but we will discuss some fundamental aspects in this episode.

Bishop Suriel vocational education and experience focuses on religious intellectualism and religiosity. His education in a wide variety of sacred and secular international institutions has greatly expanded his horizon that directs him to a deeper understanding of matters relevant to faith.

This supported Bishop Suriel to succeed in my ministry and deliver numerous successful projects – not only in building infrastructure but also in institutions that were the first of their kind in the Coptic Church.

Candace Lukasik is a Ph.D. candidate in the Department of Anthropology, UC Berkeley. Her dissertation project is entitled “Transnational Anxieties: Shaping a Minority Community between Egypt and the United States.” She explores the Arab Spring’s transnational effects through the lens of Coptic emigration to the United States.

“When I started my doctoral dissertation, I knew that I wanted to tell a different story of Egypt’s Coptic populations.” As stated in an interview with Michael Akladios about Coptic Immigration on November 24, 2019

His study is an examination of the transnational, pluricultural, and ecumenical history of Coptic Christians in Egypt, and then later in the first and largest immigrant communities in Toronto, Montreal, and New York. He charts this groups’ immigration, settlement, integration, and associational activities. Interview with Michael Akladios about Coptic Immigration To North America

In addition to his doctoral research, Michael is a course director in the Department of History at York University and the Coptic Canadian History Project founder and project manager.

About Coffee With Bishop Suriel

In our busy lives, finding a resource to answer many of our faith-related queries can be challenging. Each Wednesday, join Bishop Suriel, a popular religious leader, thinker, and writer, as he presents a fresh perspective on Orthodox Christian faith with an emphasis on all things Coptic.

Whether you want to learn more about Christian faith, or delve deeper into Orthodoxy and spiritual life, then this is the Coptic podcast for you. Tune in for a new episode every Wednesday! Listen on Apple Podcasts ~ Google Podcasts ~ Overcast ~ Castro

A not-for-profit public history and community outreach organization bridging public archives, immigrant communities, and academic scholars. We identify, archive, digitize, preserve, and democratize access to source materials that reflect the knowledge, collective memory, and experiences of Egypt’s Coptic population, Coptic immigrants, and their descendants. At CCHP, we ensure that their legacy carries well into the future.

Delivered to you by COPTICNN™ | Coptic News Network on 2020-10-08 from Cupertino, United States