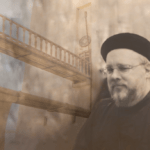 Our Orthodox Church is naturally cosmopolitan. Even in our congregations in the West, we meet Orthodox brothers and sisters from many or most of the Churches in our Oriental Orthodox communion. In my own experience, when not locked down due to COVID, I pray with Egyptians, of course, and British people, but also Ethiopians and Eritreans, with Syrians, and sometimes with Indians, who are sharing our church building while their own is being renovated.

Every year, on the second day of the Coptic month of Babah, usually the 12th of October, we celebrate together the commemoration of the arrival of Severus, the Syrian Patriarch of Antioch from 512 A.D. to 518 A.D., into Egypt as an exile.

This is as it should be. Despite our spiritual and liturgical practice being according to the rites and traditions developed in the Orthodox Church of Alexandria, we recognize that we are one Church with all of the members of these other local communities, who share the same faith and yet express it according to their own culture and spiritual tradition.

The Syrian Patriarch Of Antioch | Exile In Egypt

Every year, on the second day of the Coptic month of Babah, usually the 12th of October, we celebrate together the commemoration of the arrival of Severus, the Patriarch of Antioch from 512 A.D. to 518 A.D., into Egypt as an exile. He lived there, staying in different places, in monasteries and in the homes of his closest supporters, for the rest of his life.

When he passed away in 538 A.D., it was at the home of his friend Dorotheus, and he was buried with great honour, and with large crowds attending, in the monastery of Hennaton, or el Zugag, after which many miracles were attributed to his heavenly intercession.

The Syrian Patriarch Of Antioch | The History

Both the day of his departure and that of his burial in el Zugag are celebrated as feast days in the Coptic Orthodox Church. Severus of Antioch was not a Syrian by birth. He was a Greek speaker from Pisidia in Asia Minor, modern Turkey, but he had studied in Egypt and Palestine, training as a lawyer, and especially in Beirut, where there was a famous school of law. He represented in himself that cosmopolitan character of the Church, and of much of society in the 6th century.

When he became Patriarch of Antioch in 512 A.D., it was one of the great cities of the Roman Empire, and one of the most important positions in the Church. Yet he continued to live as a simple monk and closed the kitchens and baths, which he found in the Patriarch’s residence.

The theological controversy of the time caused him to be driven out by the Emperor, and he took refuge in Egypt. He would have found there the same commitment to the faith of St Cyril, and he continued to write and correspond and lead the Church in Antioch as far as he was able, from exile, while also becoming the most significant leader of the non-Chalcedonian movement across the Church.

The Syrian Patriarch of Antioch | God To Hide The Orban

In the lives of the Desert Fathers, we have an account of a miracle that took place in a monastery when he was standing at the back of the congregation, not drawing any attention to himself. The priest went to uncover the paten, and when he lifted the veil, he found that the Orban was missing. Even after looking around, he could not find it. He cried out with surprise and shock, sure that either the sins of himself or someone in the community had caused God to hide the Orban.

But an angel appeared at the side of the altar and, speaking to the priest, said that it was because the Patriarch, Severus, was present that this miracle had happened. Of course, as Patriarch, he should have celebrated, but in humility and in simple clothing, he had been overlooked. The angel pointed him out, but Severus insisted that the priest continue the offering, and when he returned to the altar, he found the Orban present.

The Syrian Patriarch of Antioch | Syrian In Egypt

Severus is outstanding in the history of the Coptic Orthodox Church, taking almost a primary place as a Father of the Church. But he was not the only Syrian in Egypt, nor the only stranger. The monastery of el Suriani in the Wadi el Natrun testifies to the presence of large numbers of Syrians in the Egyptian deserts. In fact, many of our spiritual practices came to us from the Syrian tradition in past centuries.

Nor was Severus the only Syrian Patriarch in Egypt. Patriarch Damian was a Syrian, as was Simeon I, and Abraham, who was involved with Simon, the Tanner, and in whose time the Miracle of the Mountain took place. In the Middle Ages, there were tens of thousands of Armenians in Egypt as well, and many of the most beautiful iconographic designs in the ancient monasteries were produced by Armenian iconographers.

The Syrian Patriarch of Antioch | The Oriental Orthodox

Of course, the nature of history in a long period of persecution, such as the Coptic Orthodox Church, and the other Oriental Orthodox Churches, have experienced for so long, tends to narrow our cultural and traditional horizons. We start to see things only in one way, and through the lens of our own experience. But in modern times, as the Oriental Orthodox spread out across the world and encounter each other again, it is necessary for us to rediscover the cosmopolitan nature of our Orthodox Christian life and practice.

In many cases, our brothers and sisters in the Oriental Orthodox Faith are just down the road. Often we are worshipping together, learning together, serving together. This was our Coptic Orthodox experience in the past, when a Syrian could become Patriarch of Alexandria, and when a Patriarch of Antioch in exile in Egypt could be named before all others in the prayers of the Church.

At the annual commemoration of the arrival of Severus in Egypt, it is good for us to consider what we could be doing, in our own circumstances, to experience and enjoy such fruitful relationships with others with whom we share the same Faith in a wonderful variety of cultures and spiritual traditions.

Delivered to you by COPTICNN™ | Coptic News Network on 2020-10-12 from Liverpool, England