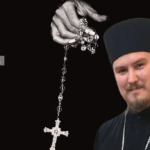 Discussing Faith | As Orthodox Christians, we often bemoan the state of our missionary work in countries unreached by the faith; however, these efforts have been growing recently, with missions and parishes emerging in the far-east, sub-Saharan Africa, and South America. Recently I had the blessing to speak with a missionary association in Cairo, discussing the challenges facing those travelling around the world to share their faith and how to counter these.

One of the biggest challenges discussed was regarding cultural dialogue and the challenges of expressing the Christian faith in communities where even the most basic Christian theological terminologies were not a part of the vernacular.

“St. Paul’s Areopagus sermon is the perfect example of knowing your audience and their culture, allowing St Paul to engage fully in their discussions and bring them to the understanding of the faith. If we break this sermon down, we will see this in its entirety.” Deacon Daniel Malyon Discussing Orthodox Faith

Though this may sound like obscurity, when we look at prevailing theologies outside of those areas occupied by Abrahamic faiths, we see the challenge facing those whose role it is to express our apostolic faith to others; it is often seen as being incompatible, at a theological level, with the local culture. Because of this, It becomes the role of the missionary to develop a theological dialogue between themselves and an audience who have no shared concepts or vocabulary to base their discussion on.

Let us look at an example. Imagine an Orthodox missionary was to travel to rural Mongolia, armed with a collection of materials and a fluent understanding of the local language. They would have the capacity to explain their belief but not to translate these in a sense that would permeate in a culture whose religious literacy is tied up largely in Buddhism and native shamanism. The challenge would no longer be one of how to begin a discussion but of how the discussion can be understood accurately and in a meaningful way.

Even concepts which we largely take for granted in discussions, such as the concept of a personal (relatable in some sense) God, may become far more difficult to express to someone whose concept of God is impersonal or whose faith is traditionally deistic. In the same manner, we would be required to address concepts far beyond this, such as trinity, incarnation, and eschatology, without risking falling into creating our own theologies or misrepresenting them.

The western Philosopher Ludwig Wittgenstein discussed this challenge in his theory of Language Games. He implied that the vast majority of philosophical disagreement is grounded in the differences in the use of terminology and that “Philosophical issues arise when language goes on holiday.” To get by this issue, one would be expected to understand the rules and terminology regarding discussing that subject like someone would be expected to understand and play by the rules of chess when in a game of chess.

In the same manner, if someone were to engage in a theological discussion with someone whose only understanding of religion comes from non-theistic or deistic traditions, they would be expected to discuss things in a way that would be meaningful to their audience; otherwise, the discussion would be fruitless. This is exactly the challenge faced by missionaries, not the ability to discuss faith, but to have it understood in a meaningful way.

This dilemma may imply that I feel missionary work in such cultures is futile; however, I, for one, relish the existence of this challenge and recognize it as having been one which the Church (both our Oriental Orthodox and the Eastern Orthodox) have had to face in the past and have done so before. In the case of the Eastern Orthodox, we have examples such as Cyril and Methodius, who literally developed a new alphabet to allow Slavonic communities to read the Gospel.

“Christ called us to bring all nations to him, this will always seem a daunting task but once the first wall is broken between the Church and those it seeks to welcome, others will seem much smaller.” Deacon Daniel Malyon Discussing Orthodox Faith

However, the greatest example can be seen in Acts 17, where St. Paul discusses the faith with Greek philosophers, applying their own terminologies and sentiments to demonstrate the nature of God, bringing many to the faith.

St. Paul’s Areopagus sermon is the perfect example of knowing your audience and their culture, allowing St Paul to engage fully in their discussions and bring them to the understanding of the faith. If we break this sermon down, we will see this in its entirety.

St Paul begins by discussing their forms of worship and beliefs through the inscription to the ‘Unknown God.’ And explains, “the One whom you worship without knowing, Him I proclaim to you: God, who made the world and everything in it, since He is Lord of heaven and earth, does not dwell in temples made with hands.” (Acts 17:23) in doing this we see him acknowledge the personal nature of their previous theology and apply it to his words regarding the Christian faith.

Following on from this, he explains to them the errors of applying their worship to this theology, using the shared belief regarding the nature of God as his basis, allowing understanding and agreement.

We also, in this instance, see an area where there is no shared basis, when we are told, “when they heard of the resurrection of the dead, some mocked, while others said, “We will hear you again on this matter.” (Acts 17:32). However, in this instance, many seem to wish to continue to hear and understand, thus giving St. Paul his opportunity to continue to share based on his willingness to reference their beliefs and use them to explain the Christian faith and its truth.

With the example of St. Paul in the Areopagus, we see both the challenges and rewards which missionaries can face when expressing the faith to others. By using and referencing the ‘Unknown God’ and how He is known through Christ, St. Paul was able to win many to the faith; however, he also recognized the challenge of expressing belief in an afterlife to those who do not recognize the post-mortem existence.

It is in matters such as these that the modern missionary will look to establish a shared understanding of language on the nature of body, soul, and spirit where available. However, topics of eschatology remain something of a challenge to express even to those within the Church at times.

Overall, the challenge of filtering the truth of our faith through differing cultural contexts is one that the Church faces increasingly as it looks outwards to missions in cultures with no prior understanding or exposure to Abrahamic faith, and especially to Christianity.

However, through recognition of the need to work within the bounds and rules of the prior language and cultural or religious landmarks of those we are seeking to bring to Christ, we can break down the language barrier and allow for more meaningful and thorough dialogue, deepening the love of Christ in those we wish to welcome into his Church.

Christ called us to bring all nations to him, this will always seem a daunting task, but once the first wall is broken between the Church and those it seeks to welcome, others will seem much smaller.