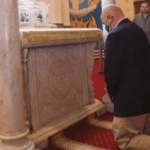 The United States, through USAID, has presented more than $100 million to preserve and restore more than 70 historical sites in Egypt, maintaining these sites for future generations, increasing tourism, and generating jobs and income for Egyptians.

The delegation additionally met with faith-based organization Coptic Orphans. In connection with Coptic Orphans, the United States has supported over 5,000 girls in Assiut, Minya, and Sohag to acquire skills to become leaders in their areas.

The delegation also visited Flat6Labs with Minister of International Cooperation Dr. Rania Al-Mashat, where they met with young Egyptian entrepreneurs to present their business plans and successes.

Flat6Labs, supported by the United States through the Egyptian American Enterprise Fund, the leading business accelerator in Egypt, in partnership with USAID assisting 106 businesses, create 7,450 jobs.

The $3 million drive will reach 1,500 youth, parents, and community leaders in Upper Egypt to promote economic development, foster understanding between religious communities, and empower girls’ access to education and employment.

Since 2011, through USAID, the United States has approved over $150 million to help thousands of local Egyptian entrepreneurs and small- and medium-sized companies in Egypt today.

Since 1978, the American people have spent over $30 billion, through USAID Egypt, to support Egypt’s economic development.

About USAID’s Work In Egypt

For over 40 years, the American people have partnered closely with the Egyptian people reading ability in the early grades and increasing marketable skills – leading to jobs and lasting prosperity.

USAID Egypt programs give future generations the tools to succeed and provide the Egyptian larger youth population as they enter higher education and the local workforce.

USAID is improving water productivity and agriculture and improving livelihoods in rural zones where lack of jobs and poverty, especially for women and youth, are all too common. USAID Egypt seeks to strengthen government officials’ contributions, civil society, communities, and individuals to build and strengthen institutions that meet the Egyptian people’s political and economic needs.

John Barsa is the acting USAID Administrator as of April 11, 2020. Before, he was the Assistant Administrator for USAID’s Bureau for Latin America and the Caribbean. John Barsa brings considerable experience from decades of service in the public and private sectors.

Mr. Barsa grew up in an entirely bi-lingual and bi-cultural family in Miami, Florida. He is the son of a Cuban refugee. He has a bachelor’s degree in International Affairs from Florida International University and is a graduate of Syracuse University’s National Security Management Fellows Program.

About The U.S. Agency For International Development (USAID)