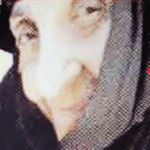 Chapter V :: The Departure Of Nun Mariam | Part 1 ~ Life Of Prayer And Praise

CHAPTER 5: The Departure of Nun Mariam

“…speaking to one another in psalms and hymns and spiritual songs, singing and making melody in your heart to the Lord.” (Ephesians 5:19) ~ Life of Prayer and Praise | The Departure of Nun Mariam

We know very little but a few small details of the mysterious life of Nun Mariam and her relationship with her Heavenly Bridegroom. She lived a life of constant prayer, with her mouth always moving in inaudible prayers which we did not quite comprehend. She was keen on following her spiritual canon (rule) and the rule of prostrations which was essential to her. Even in her poor health, old age, and last years of her life; when her health prevented her, she continued to carry out her rule through the performance of half a prostration instead.

It was known of Nun Mariam that she never left her cell before 10 o’clock in the morning and no one knocked on her door during that time. She said it was due to a chest allergy, however, it was consistent and persistent in carrying out her spiritual rule in her cell without leaving it until she was completely done that kept her in her cell.

She greatly cared for the praises of the month of Kiahk which are dedicated daily to our Lady the Virgin. She chanted in complete concentration and without getting distracted by anything, regardless of what happened around her.

Recently [before Nun Mariam departure], when anyone passed by her cell, they heard the sound of the playing of cymbals by her, in praises and many prayers. Moreover, the hymn “Hail to you Mary” [Coptic: Shere ne Maria] had a special place in Nun Mariam’s heart who always chanted it in a loud voice. In the last days of her life and when she could no longer play the cymbals, she clapped instead. You could hear her and the great joy she was in from outside her cell, in the continual praising of her [the Virgin Mary].

“I had the blessing of staying in the cell next to Nun Mariam’s cell. When I entered, I felt unrest and wasn’t able to sleep in it. I did not reveal this to anyone. During the day I left my cell for work, and at the end of the day when I returned, I found Nun Mariam enter my cell, praying and prostrating inside it. Having done this, I felt unexpected rest afterward and it later became the most beautiful cell to me personally, and I have no desire to ever leave it.

Even though Nun Mariam lived a life of continual prayer, at times when asked by anyone to remember them in her prayers she said, ‘May God keep you away from Mariam’s bad prayers, better away from my bad prayers… I can barely even pray’. She would then turn to an image of our Lord to whom be the glory and say, ‘We ask from our Lord Jesus’. Other times she directed her gaze towards images of our Lady the Virgin, St George, and the rest of the Saints.

When an individual was undergoing a problem or dealing with an issue and went to Nun Mariam, they found her in complete stillness saying, ‘Look, the Virgin is right in front of you. He said, “Do not be afraid”. Go. The issue will be solved.’ And truly, the issue would be peacefully resolved.” – a nun from the convent.

“Whenever I asked Nun Mariam to pray for me when I was going through a problem, I would always feel at peace and find the answer afterward. She was very generous in her prayers and petitions, as she was in her charity. She had a phrase which she constantly recited: ‘Do not kidnap me the kidnapping of a lion, do not take me in the middle of my days… do not leave me in my old age’.

As she got older and began to suffer from fatigue, you found her talking to our Lord in all hope saying, ‘Do not leave me in my old age’. Indeed, God answered her petitions, and she was able to move, stand, and walk on her feet very naturally, lively and with vigor until the very end.” – a convent worker.

Even while she was asleep or in another situation, she was found in prayer directed to our Lord Jesus Christ with hands lifted upwards, and asking for the intercessions of our Lady the Virgin. She always made you feel as if she was always seeing our Lord Jesus, to whom be the glory. Even on the day prior to her departure, she had her hands lifted in prayer the entire night, despite her inability to stand due to the severity of her decline.

The Holy Bible in her Life:

“Your words were found, and I ate them, and Your word was to me the joy and rejoicing of my heart; For I am called by Your name, O Lord God of hosts.” Jeremiah 15:16

She read the Holy Bible consistently and lived by its commandments. Her language was that of the Holy Bible and she loved reading the book of Jeremiah at midnight – an important book to her personally.

Fellowship with the Saints:

“It is not, O Master, that we are worthy to intercede for the blessedness of those Saints; but it is because they stand before the throne of Your Only Begotten Son that they, rather, should intercede for our pity and weakness.” Liturgy of St. Cyril

Nun Mariam had a personal and strong relationship with the Saints, with the daily reading of the Synaxarium being an important aspect of her life like the reading of the Holy Bible. She lived with the Saint of the day, an example of this is the previously mentioned miraculous healing of her hemorrhage through the intercessions of St. Andrew the Apostle.

She sensed their presence around her, and on those times when she did walk around the convent, she greeted and kissed all of the images that hung on the walls. She also stood by each one to say a small prayer, even if she passed by them numerous times on a single day. She did this in humility and veneration because it was nothing irrelevant to her.

Among the examples of Nun Mariam’s love for the Saints was her strong relationship with St. Mina the Wonderworker. He appeared to her in a dream where she was in a place full of beasts ready to attack her when St. Mina suddenly appeared, slayed and cast them far away from her, and told her, ‘Do not be afraid, I am with you. I will not leave you during any hardship’. From that day forward and she shared a special relationship with him following the Virgin Mary and St. George.

Chapter 5 :: The Departure Of Nun Mariam | Part 1 ~ Life Of Prayer And Praise

I am a law graduate and psalter serving in the Diocese of Mississauga, Vancouver and Western Canada. I translate Arabic hagiographies of recently departed Coptic monastic figures. In my journey of discovering the rich faith and heritage of the Church of Alexandria, I am interested in making available in the English language the numerous Arabic biographies of contemporary monks, nuns and figures of the Coptic Orthodox Church to upcoming non-Arabic speaking generations of Copts worldwide.