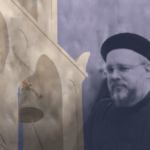 Why do we worship the way we do?

This is an important question.

I am a convert to the Orthodox Faith. Until I discovered the Orthodox spiritual traditions I had no experience of liturgical worship at all. I had been taught and was convinced that written prayers could not be sincere, spiritual, or pleasing to God. You can imagine that my exposure to the Orthodox tradition of prayer and worship challenged these assumptions.

I have had to ask myself many of the questions which those coming fresh to Orthodoxy, as well as those growing up within Orthodox households, find themselves considering. Liturgical worship is subject to a number of myths, false ideas which I had certainly accepted before I even had any experience of the liturgical tradition of the Church.

Myth #1 is that liturgical worship is not sincere. The argument goes something along the lines that if the words we use are not our own then we cannot really mean them. We often use set words and texts in a wide variety of other settings. If a couple are being married there are certain words and phrases which must be used and which by their very formality express the importance and the meaning of what is taking place.

If the minister omits those words then whatever is intended, it is not a marriage. When the minister says, ‘By the power vested in me by the state of wherever, I now pronounce you husband and wife’, he means this to be the case.

Likewise, a witness in a court swears ‘to tell the truth, the whole truth and nothing but the truth’, should we assume he is not sincere just because he is using a formal set of words? These particular words leave no room for confusion. We know exactly what is meant. Far from diminishing sincerity the use of such written words allows people to clearly express their meaning in a way that their own hesitant and stumbling words in such a situation might not allow. If I am to worship God then I must learn the language of worship, the language of heaven, the liturgical tradition of the Church, so that I can communicate what my heart wishes to express.

We follow these words, with all the effort that this requires until they become our own words. To do such, with sincerity, is to be transformed into the likeness of Christ and to grow up into a mature faith.

Myth #2 says that it is not Biblical. Zachariah is introduced to us waiting his turn in the liturgical worship of the Temple, and when his name was chosen by lot he entered the holy place and offered prayers and incense at the altar. During this highly elaborate and liturgical prayer, the angel of the Lord appears to him saying, ‘Your prayer is heard’.

In the Acts of the Apostles, after the descent of the Holy Spirit upon the Apostolic community, we read of the believers gathering in the Temple and continuing to participate in the liturgical life of the Temple until they were eventually driven out and persecuted by the Jewish religious leaders.

Much of the description of the worship in the Heavenly Temple is liturgical in character…. the seven angels came out of the temple, … clothed in pure and white linen, and having their breasts girded with golden girdles. … And the temple was filled with smoke from the glory of God, and from his power.

Liturgical worship is found throughout the Scriptures and is taken as a given. This is how people worshipped. It was natural then that liturgical worship was adopted from the beginning in the Church, and from the very earliest period of the Church it was always liturgical, and it remained liturgical through all the centuries that followed.

Liturgy is not only a means of expressing with clarity the heartfelt worship of a sincere heart, but it is Biblical and Apostolic. It is how Christian worship was always intended. Liturgical worship is not a matter of taste or fashion, it is part of the very structure of the Church.

Why do such congregations read the Bible, if the written word is not spiritual? And if the Scriptures are excused from condemnation then how can it be unspiritual to offer the very words of Scripture in prayers and hymns? The Liturgical services of the Church are the spiritual school which each one of us requires if we are to learn to offer acceptable worship to God.

If I asked my bishop, or any of the older and most faithful priests and monks in our Church, to offer prayer they would certainly be able to do so. But every word they prayed would resonate with the years of attentive prayer and study with which they had occupied themselves. They have made the language of worship, the language of heaven, their own.

Spontaneity without preparation produces outcomes without spiritual depth or substance. This is true of any field of activity, not only within Christian spirituality. How can we expect to spontaneously produce anything spiritual if it has not already been stored as treasure within the heart? Liturgical prayer allows us to gain experience in using the best of prayers so that our own spirituality is formed by the words we use as we make them our own.

Liturgy reminds us that the spiritual life is one of great effort and application. We can’t have it all at once. The Liturgical worship of the Church demands patient endurance of us. If we could have it all at once it would not be worth having.

Myth #4 is that liturgical worship just isn’t suited to modern people. Does that depend on what is expected of liturgical worship and of modern people? Physical exercise does not seem suited to modern people, but we would not say for that reason that people should be encouraged to avoid exercise, just because that is what they preferred. It is relatively easy to fill a place of worship with people if they are only offered what they want.

But if they are only given what they want then they will never get their real needs addressed. How do modern people know they don’t like liturgy, and how can we say that on behalf of others? Is it a matter of taste in any case?

I am not convinced that liturgical worship in itself is any obstacle to a properly informed person engaging with our Orthodox Faith. It was not for me, and I have come from the most anti-liturgical background possible. But it does need to be explained, it needs to be appropriate for the stage at which each person finds themselves, and it needs to be generally comprehensible.

What many ordinary people are looking for is beauty, order, and maturity in worship which they do not find elsewhere. If liturgical worship can be offered with comprehension then it does provide something which many modern people are seeking after.

The language of heaven belongs to all people because it is a language that we were created to use.

Liturgical worship has a purpose, and that purpose is to impart a sense of heaven in the soul, to make us truly alive and authentically human. It must be beautiful, uplifting, transforming, and transcendent. To merely reproduce the culture around us is to diminish the meaning and value of our worship. It is liturgical worship which forms our spirituality. If we wish to become Christian then it is by the means of our Orthodox prayers and hymns that we will be transformed.

It is the communal prayer which forms us in Christ and forms us all into the Body of Christ. That we are praying the same words with attention matters. When the Deacon says, ‘Let us attend’, it is significant that we are all of us called to be attentive to the worship at hand together. We are not engaged in private acts of devotion but gathered together, participating in the same words, with the same intentions, and making the same effort of patient perseverance, we are always becoming that which we are not yet but hope to become by the Grace of God.

The liturgical language of heaven is the best that we have to offer, and draws the best out of us, forming us into the image of Christ, if we attend to the worship of the Church as if each word and phrase was our own. It is how the Church worshipped in the beginning and has always worshipped. It is rooted in the language and content of the Scriptures, it looks forward to heaven.

It is a spiritual poetry that lifts the soul towards God and expresses the desire of our heart towards God when we are unable to find the words. The challenge is never to replace the spiritual ascesis of the liturgy but to encourage all to embrace the effort more completely.

Delivered to you by COPTICNN™ | Coptic News Network on 2020-10-26 from Liverpool, England