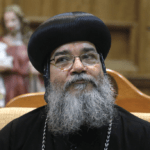 There have been some plays, sketches, and general dramas on the lives of the martyrs, sometimes with detailed scenes of tortures and killings, scenes which are undoubtedly distressful. Perspectives of the cruelty of the soldiers tasked with this, the various methods of torture used, the shedding of blood, and especially those [scenes] of the director being influenced by the desire of making the scenes excitable for viewers (Action).

We may notice that early on Coptic iconographers avoided the portrayal of details of torture in their icons, as did the writers of the Psalis and Doxologies, and merely pointed at them. H.G. Bishop Macarius noted.

The truth is, this presents a grave danger to viewers and children in particular. For a child whose faith has not yet risen to the level that qualifies him to offer his life for God and endure various tortures, it will take root in him that whoever follows God will definitely receive this terrible fate! I heard from some adults that when they were children, they hid under their beds when scenes of torture came on during films of martyrs shown on satellite channels or videotapes.

I think it is of great importance to cultivating in our children the spirit of martyrdom, whether for the sake of our nation or for the sake of our faith, but properly and with wisdom. To be able to emphasize the necessity of enduring suffering, accepting death and winning the crown prepared for martyrs, and that God endows the person, in those circumstances, with special strength and grace – but without showing details of tortures and killings.

Bishop Macarius | Something Of Fear

I remember when the video of the execution of the former Iraqi president “Saddam Hussein” was shown and the critical moments were removed; the publisher said in a statement that the removal was due to the distressful nature of the scene. Also, those responsible for the viewing of aired wrestling matches are keen on censoring scenes of a horrific collision or serious injury.

Publishers often warn of films containing scenes capable of negative consequences and are forbidden to watch by those under the age of eighteen out of fear for their sensitivities, and so that these terrifying scenes do not haunt them in their wakefulness and their sleep. Also, those scenes may develop a spirit of violence, blood, and gore among a portion of viewers.

“Here I urge the writers and directors not to exaggerate their descriptions of the hero’s evil and legendary strength, his shameless and luxurious life, his numerous relationships, and his power and influence.” H.G. Bishop Macarius asked.

I remember in the film, “Something of Fear”, the film’s hero wanted to develop a spirit of revenge and vengefulness in his grandson, so he slaughtered a pet bird in front of his eyes while still a child; there is a difference between courage on the one hand, and violence, bloodlust, and a spirit of revenge on the other. There is also a difference between defending homelands by all means, and criminal killing (legitimate wars and crimes).

These bloody scenes develop a terroristic and an ease of killing approach, and we know of terrorist groups that train children to kill by using any means, with some even forced to kill those closest to them in order to overcome human sympathy and blood ties, as well as the love of life and the appreciation of its value. Here I urge the writers and directors not to exaggerate their descriptions of the hero’s evil and legendary strength, his shameless and luxurious life, his numerous relationships, and his power and influence.

Even if he is arrested and tried at the end of the drama, this may not promote lawfulness and virtue, but rather promote vice, lawlessness, and encouragement of crime instead.

“Coptic iconographers avoided the portrayal of details of torture in their icons, as did the writers of the Psalis and Doxologies, and merely pointed at them.” H.G. Bishop Macarius stated.

We may notice that early on Coptic iconographers avoided the portrayal of details of torture in their icons, as did the writers of the Psalis and Doxologies, and merely pointed at them. Also, there are icons of the crucifixion where the crucified Lord Himself is not shown with one of the interpretations being that pride has now come through the cross, “…having made peace through the blood of His cross.” (Colossians 1:20); here the word ‘cross’ is used in place of ‘the crucified one’.

I also read that most ancient historians refrained from writing down the details of the crucifixions, in contrast to those who recorded the atrocities done by the ancient Scythian groups. No one denies the influence media and drama have on society, with the media now becoming an essential partner to education and the promotion of values, virtue, and noble humanitarian feelings. Therefore, the heroes we adore should not be shown to be committing reprehensible acts so that viewers do not imitate and assume this in their own personalities.

I remind you, that the spread of violence among a large portion of young people has partially been due to some kinds of drama, as well as violent and bloody games. Finally, I think it is inappropriate for us to use the nave of the church for drama or activities so that the people do not lose their reverence; but rather for prayer, teaching, and the liturgical services.

Bishop Macarius, head of the Coptic diocese in Minya, south of Cairo. Ordained as the bishop of Minya and Abu Qurqas in 2004. Born Makram Ayyad on June 10, 1958, Anba Makarios became a monk in his twenties and joined the Virgin Mary Monastery of Baramos in Wadi al-Natrun, where he was named Kirollos of the Baramos. Over the following years, Makarios of the Baramos Monastery was promoted until he was ordained as a priest in 2001. Bishop Macarius spent 25 years in the desert as a monk, reading, writing, and translating. His first title, Many Teachers, was published in 1988 under the pen name “A monk of the Baramos Monastery,” as was the case with his subsequent works.