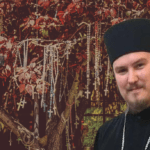 Something Wicked This Way Comes, But Not The Thing You Think

“Something wicked this way comes,” we hear many say at this time of year. Whether it be children dressed as vampires, neopagans measuring the daylight, or overzealous preachers warning of the evils of the ‘devil’s birthday’ on October 31st. However, to myself and many others, the evil of this time of year does not lie in claims of pagan holidays but in the tragic tale of encroaching protestant propaganda in our rhetoric and the commercial appropriation of a sacred time of year in western Christendom.

The fact is that each year we are met with flurries of adverts for a mysterious event called Halloween, one which brings joy to many and horror to an equal proportion of the Orthodox Christian population of the world. However, the reason for this horror is where the mystery lies, since a lot of this horror comes from a long-lasting historical piece of propaganda that originates with anti-Catholic sentiment and opposition to the concepts of feast days and the veneration of saints.

On this day, Christians would visit Church, say prayers for the departed, and offer alms to the poor to remember the works of the saints, their ancestors, and their own salvation. Something wicked this way comes by Deacon Daniel Malyon.

Something Wicked | The Origins Of Halloween

We find the origins of Halloween in the 8th Century when October 27th (now November 1st) was made the date of the Feast of All Saints in the Western Church, in the east this had been earlier in the year, but the new date was made a day of obligation for western Christians, with the feast of All Souls remembered the day after. This moving of the Feast of All Souls was not a coincidence but associated with the Church’s belief that those in heaven and those of earth are linked through the Church, as we always remember during our commemorations in the divine liturgy.

As this grew, and the English language also began to develop, the words ‘All Hallows eve’ (The eve of the Feast of All Saints) became something different, Hallowe’en. This the term Halloween was born, not as a pagan or satanic feast but as the simple eve of the western Christian date for the feast of all saints. On this day, Christians would visit Church, say prayers for the departed, and offer alms to the poor to remember the works of the saints, their ancestors, and their own salvation.

‘souling,’ where poor children would go door to door collecting alms; and mumming, where actors would travel to homes and taverns in costumes to perform traditional and biblical plays. Something wicked this way comes | Deacon Daniel Malyon.

This also led to the development of traditions such as ‘souling,’ where poor children would go door to door collecting alms, and mumming, where actors would travel to homes and taverns in costumes to perform traditional and biblical plays. Both would later form the basis of trick-or-treating.

Something Wicked | Something Evil

With the protestant reformation and its irrational opposition to any aspect of Christian tradition which did not comply with its understanding of the biblical Church, views on the origins of various festivals started to take a turn in western Europe. It is from this, and the obscure fringes of western academia, that we see our ‘something evil’ creek through the gaps. Along with their claims regarding Jesus being a replica of Horus and Easter being a Babylonian goddess of Death, a claim that Halloween is simply a Christianised version of the feast of the pagan death god ‘Samhain.’

This is a common claim seen even today amongst protestant groups; however, the historical existence or worship of the ‘great God of Death, Samhain’ is itself a fiction. In the 18th Century, before archaeologists were even able to fully study Celtic and early pagan religion, a number of western academics simply put names and words from myths together and hoped their made sense, one of these was the existence of a God of Death named Samhain, which appeared in a number of articles at the time but has now been confirmed to have been an error, with the word Samhain simply meaning a sacred time, or the Celtic new year on November 1st.

Along with their claims regarding Jesus being a replica of Horus and Easter being a Babylonian goddess of Death. Something wicked this way comes by Deacon Daniel Malyon.

Something Wicked | The Feast of All Saints

However, with the claims of the Feast of All Saints being held on the feast of the pagan God of Death, the Protestants had gotten the ball rolling for their anti-veneration crusade alongside the emergence of neo-paganism and its created rituals for feasts of which the original purpose is nigh-on-unknown, we see the emergence of the modern myth of Halloween. This took its next step across the Atlantic with the growth of the evangelical protestant movement in the USA.

Something Wicked | The Western World

In the US by the mid 20th Century, practices such as trick-or-treating had grown in popularity alongside the gifting of Halloween cards with images of witches or lanterns, all practices associated with the Feast of All Saints in Catholic and European nations. All of these were taken as a sign of the sinister origins of the feast by protestant preachers in the US who began to rail against the holiday as a pagan and demonic sabbath which must be stamped out.

This led to fundamentalist and often anti-Catholic preachers such as Jack Chick crusading against the holiday, inspired by their dislike of the Christian holiday as much as the modern American incarnation, one ready for businesses to cash in on as a commercial product for selling to the youth as a ghoulish festival of scary costumes, bags full of sweets and monster movies. This, alongside the rise of groups like the Church of Satan, who claimed the holiday as one of their feasts, brought about the modern American mindset regarding it. One which has since spread across society, along with its decadence, literature, and historical ignorance.

Not knowing that under the commercial wrapping of the event in American culture lies the solemn memorial to departed and to the saints in their glory. Something wicked this way comes | Deacon Daniel Malyon.

In the modern-day this propaganda, which originated from both the neopagans seeking to undercut the historical faith and from protestant Christians seeking its destruction, has become engrained as the fact of the matter in the cultural memory of many in the west, demonstrating our ignorance as to our own tradition and knowledge of the Christian heritage of the western world.

In wider immigrant communities with no knowledge of this history or stock in western European heritage, it has become even more so, with Christians from other cultures crying out that “Halloween is Satanic,” and condemning the very Saints of the Church by announcing that, “Christians who do not condemn Halloween are demons,” not knowing that under the commercial wrapping of the event in American culture lies the solemn memorial to departed and to the saints in their glory.

We must strip away the modern consumer culture which has perverted them and proclaim the Christian glory behind them in its fullness. Something wicked this way comes by Deacon Daniel Malyon.

Something Wicked | The Coptic Orthodox Community

Sadly, even in our own Coptic Orthodox community, where the veneration of Saints is paramount, we seem to fund people turning to these polemicists for our understanding of the event due to historical ignorance and biases based on what they see around them today. This has led to a vast amount of misunderstanding surrounding the origins and often to many condemning even the notion of this western Christian tradition under the guise of defending the faith, inadvertently buying into the very anti-Christian sentiment promoted by these evangelicals in the 1960s.

Yes, rail against trick or treating, materialism, and the glorification of evil. Something wicked this way comes | Deacon Daniel Malyon.

However, if the Church is to seek out its mission to the west, we must understand its Christian heritage and pre-existing practices in their truest form, and instead of destroying them in a blaze of ignorance, we must strip away the modern consumer culture which has perverted them and proclaim the Christian glory behind them in its fullness.

Something Wicked | A Monstrosity

So, what do I mean when I say, “something wicked this way comes?” When I speak these words, I announce the coming of a monument to our ignorance. Yes, the Halloween we see advertised around us today is indeed a monstrosity created by those seeking to pervert the historical Church, but more wicked is the willingness of many within the historical Church willing to propagate this myth.

We must not walk with those who promote deceptions about the heritage we preserve but work in our fullness to return this to Christ. Something wicked this way comes by Deacon Daniel Malyon.

Something Wicked | In Christ We Must Return

If we are to call ourselves members of the “One Holy Catholic and Apostolic Church,” we must not walk with those who promote deceptions about the heritage we preserve but work in our fullness to return this to Christ. Yes, rail against trick or treating, materialism, and the glorification of evil. Visit your Church to pray for the intercession of the Saints on this day, as Christians have done for a millennium and still do around the world, myself included. But do not buy into the anti-church-based hysteria and ignorance as to the truth of this day, since its origins and truth are found in Christ, and it is there that we must return it.

Something Wicked This Way Comes, But Not The Thing You Think