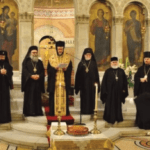 2020 Massacre In Nice | Nothing Can Justify Such Violence

Nice, France | Yesterday, the world show solidarity with France and the French. Many thoughts are with the victims of the heinous attack on Nice and their loved ones.

“Nothing can justify such violence.”

Terror struck again in the heart of our Nation and offended our Democracy.

Nothing can justify the violence that costs human lives and even in a church, in a place of prayer, the praise of God, and peace.

We, the Orthodox Bishops of France, strongly condemn this heinous act and any religious exploitation for political reasons. Religion can only be a factor of peace and brotherhood between peoples and a means of integration into the Republic and our country’s traditions.

We express our solidarity and our sincere and friendly condolences to our Roman Catholic brothers in France. The orthodox of France participate in their mourning and pray for the victims and the wounded.

We also welcome the action of the security forces on the front lines to ensure order.

World leaders and prominent Christian figures have expressed their solidarity with France after a deadly attack at a church in the southern French city of Nice.

Archbishop Angaelos of London issued a Twitter, praying for the deceased, bereaved, injured, and traumatized.

This last week we have seen children killed at a school in the #PeshwarBlast and worshippers killed today at a church in the #NiceChurchAttack; two places in which people should never be vulnerable to such heinous acts—praying for the deceased, bereaved, injured, and traumatized. @BishopAngaelos | Massacre In Nice Issued Statement

Pope Francis informed of the savage attack perpetrated this morning in a church in Nice, causing several innocent people’s death.

“His Holiness Pope Francis joins in prayer with the suffering of the families and shares their grief,” said a message sent in his name to the bishop of Nice. Pope Francis Statements

Earlier, Vatican spokesman Matteo Bruni said the attack “sowed death in a place of love and consolation,” a house of God.

“It is a moment of pain in a time of confusion. Terrorism and violence can never be accepted,” Matteo Bruni said on the 2020 Massacre In Nice

Massacre In Nice | COPTICNN expresses solidarity and support for France after an attacker killed three Christians.

The vile attack on the Nice cathedral will not weaken our common front in defense of peace and freedom values. Our convictions are more potent than fanaticism, hatred, and cowardly terror. We are close to the families of the victims and our French brothers. We are united!

“Our thoughts and prayers are with the victims and their families, and we all stand steadfastly with France against the barbaric attack at the Notre-Dame Basilica, terror, and intolerance.” Nader Hanna | COPTICNN on the 2020 Massacre In Nice

Delivered to you by COPTICNN™ | Coptic News Network on 2020-10-30 from Vancouver, Canada

2020 Massacre In Nice | Nothing Can Justify Such Violence