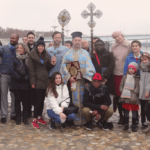 France Father Nikolaos Kakavelakis, a Greek Orthodox priest, has been wounded in a shooting in Lyon, France, sparking initial fears it was part of escalating terrorism in the European nation.

The French priest has survived an attempt on his life after having been shot at by his ‘lover’s’ jealous husband according to prosecutors. The suspect, only identified as Giorgi P., ‘turns out to be the husband of a woman who was having an affair with the victim,’ prosecutors reportedly said in a statement of his 35-year-old Russian wife named Lela K.

Fr. Nikolaos Kakovelakis, the 52-year-old priest, was shot in the stomach, and his condition is considered life-threatening, according to police and the Lyon prosecutor’s office. He did undergo surgery this Monday morning and now recovering. [Update November 2nd, 2020] May God restore him to the fullness of health, through the intercessions of the Holy Unmercenary Healers Kosmas and Damian and all the healing saints!

Instead, we will live by faith and enter our churches and get on with the empirically proven business of conforming our lives to our God’s and finding there — and only there — our real salvation. It’s not a cop-out; it’s a necessity! Welcome to Faith in the Real World!

The priest, Nikolaos Kakavelakis, was “preparing to close his church,” when an assailant shot him twice. The priest receives first aid on the spot because he has severe injuries and remains in critical condition. Fr. Nikolaos Kalavelakis is currently fighting for his life in a French hospital.

Fr. Nikolaos Kakovelakis serves as a Priest at the Greek Community of Lyon since 2011. He is a Greek Citizen from Chaniá, Crete, Greece. 52 years old, married, with three children, and the youngest is three years old. He is one of the most beloved members of the Greek community in France with rich social work. He lived for years in the French city, with his family.

The police detained a Greek Orthodox disgruntled community member linked to a long-running conflict within the city’s small Greek Orthodox community as a suspect in the shooting of Fr Nikolaos Kakavelakis in Lyon. [Update November 1st, 2020]

Also, Christos Koutsiouris, a board member of the Greek community of Lyon, posted on Facebook confirming the shot priest was beaten and had his cross stolen last Sunday while he was jogging on the banks of the Rhône by five Algerians or Moroccans. [Update November 1st, 2020]

The parishioner, Jean-Michel Dhimoila, told the Associated Press that local police raided his home on Monday, collected documents, and took him in for questioning — although not as a suspect. [Update November 2nd, 2020]

But the married father of two young sons, a four-year-old and one-year-old, ‘miraculously’ came out of a coma Wednesday — and told investigators he was attacked because of an illicit affair. The gunman was identified as a 40-year-old man of Georgian nationality who lives close to the Greek Orthodox Church in the 7th arrondissement of Lyon. He insisted he did not intend to kill the priest when he shot at him with a sawn-off shotgun that he later discarded.

He has admitted gunning Father Nikolaos Kakavelakis down while he was locking his church up, and having left the priest for dead. Both the gunman and the man’s wife are now in custody.

The suspect ran to his home nearby and believed he might have got away with the crime until Father Kakavelakis made a miracle recovery.

Father Nikolaos Kakavelakis, a Greek national who had been a priest in Lyon for the past decade, had resigned from his post last month and was working out a notice period. It wasn’t immediately known if the church had been aware of the church leader’s indiscretions.

Dedicated in Prayer with Fr. Nikolaos Kakavelakis. Delivered to you by COPTICNN™ | Coptic News Network on 2020-11-01 from Lyon, France.

Fr. Nikolaos Kakavelakis | We Will Never Alter Our Faith Out of Fear

0 0 0
Previous : Something Wicked This Way Comes, But Not The Thing You Think
Next : Reflecting On The Coptic Orthodox Spiritual Tradition
COPTICNN™ | Coptic News