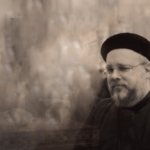 I have been an Orthodox Christian, a member of the Coptic Orthodox Church, for over 26 years. I was born and brought up within a committed evangelical protestant household. I was whole-hearted in my participation in various ministries, and eventually, I spent three years at an evangelical Bible College preparing for pastoral service in the evangelical movement. But after all of this experience, I had not learned how to pray.

Or perhaps it would be more accurate to say that I was just beginning to learn to pray, and this was not because of anything I was discovering in the Christian tradition of my youth, but because I was slowly being exposed to aspects of the Orthodox spiritual tradition which from the first made a deep impression on me.

While some traditions of the daily office are filled with variety and require either several books or fingers to be placed in several places in the office book, within the Coptic Orthodox tradition there is a much greater degree of similarity between each hour. There are the same initial prayers, a selection of psalms, a reading from the gospel, the Trisagion prayer, the Lord’s prayer, an absolution, and a final prayer. In many of the hours, these will be the same text, and in all cases, the same words will be used each day.

I have found this a tremendously fruitful tradition. Of course, there is a lack of variety, but using the same words at each hour and each day means that they become rooted in my personal experience, and can be memorized so that at least some portion of the hours can be offered at the appropriate time whatever I am doing. For the first time in my Christian experience, I was able to participate in the benefits of having a simple and habitual rule of prayer.

It seems to me that there is great wisdom in the Coptic Orthodox tradition of the daily office because the lack of variety prevents the heart from wandering in search of spiritual excitement, as it were, and invites the orthodox Christian who prays these prayers to put down deep roots into words which are repeated over and over again.

The Coptic daily office also makes great use of the psalms, more than in any other collection of prayers I had used. In my own experience, there has been a great benefit in being encouraged to turn to the psalms so often. If each day the hours were to be prayed in its entirety then a very large proportion of the book of psalms would be prayed in each day. The usual practice for faithful members of the Coptic Orthodox church, when they pray these hours, is to recite one or two or three of the psalms on each occasion.

I had become very attracted to the works of John Cassian, and especially his accounts of these conversations with the monastic fathers of the Egyptian Desert. These writings introduced me to be the idea that Christian spirituality was a science and that there was teaching, a body of knowledge, and a variety of practices that had been established in the earliest Christian centuries and was still being passed on today. Among these teachings was that of seeking to be always standing in the heart before God in prayer.

This was very different from the understanding of prayer which I had learned as an evangelical. In that context, prayer was especially understood as something that was offered at a particular time in the day and was especially a matter of making intercession for others and for oneself. The idea that prayer could and should be a constant state was unknown to me before I began to investigate the orthodox Christian spiritual tradition.

Having become a member of the Coptic Orthodox Church, this form of prayer, and others like it, especially the Jesus prayer – Lord Jesus Christ, Son of God, have mercy on me – have taken on a new meaning. Or rather their meaning and value have become clear. Such prayer can only become truly effective in the context of the Orthodox Church itself.

It is not possible to even begin to practice constant prayer, even for a short period, unless the one who is praying in this way is also participating in the sacramental life of the Orthodox Church, and has a habit of daily prayer, according to the daily office. Outside of Orthodoxy the use of these prayers, though undoubtedly a blessing, was, in my own experience, lacking the proper spiritual context for them to be truly effective.

Before I became Orthodox I rather thought that forms of prayer were something that one did as if simply saying “O God make speed to save me, O Lord make haste to help me”, was the same as actually praying. But after some years of being an Orthodox Christian, and making some committee use of these forms of prayer, I realize that they are in fact the beginning of the experience of standing inwardly before God. They are one means of this becoming possible as God wills, but they are not the end of the spiritual life at all.

Indeed, this form of prayer, which is rooted in the Coptic Orthodox tradition, is another instance of prayer not saying very much at all, But which makes possible planting deep spiritual roots. This form of prayer is, in one sense, an inward and silent analog to the outward prayer of the Agpeya. There is no variety in the words, but the invitation to enter more deeply into the content of those words is always at the heart of the Agpeya.

My own experience has been that when I have turned to the spiritual fathers of the Coptic Orthodox Church I have often read only the first chapter, put the book down, and realized that I have not yet had even begun to put it into practice.

This sense of having just begun to experience the spiritual life is always present to me even after having been an Orthodox Christian for over 26 years. Each day provides an opportunity for deeper and richer participation in the prayers of the daily office, of a deeper and more attentive use of prayers such as the Jesus prayer. But as a convert, an Orthodox Christian, and now as an Orthodox priest, the sacramental and liturgical experience of prayer remains central to the Coptic Orthodox spirituality.

They can be no Orthodox spiritual life apart from participation in the sacraments of the church. It was only those who had been baptized and chrismated who could join with the rest of the Christian community and pray the prayer, “Our Father….”. Likewise, it is only those who remain in Christ, through participation in the sacrament of the eucharist, who are able properly to enter into an experience of the Coptic Orthodox spirituality of prayer. The liturgical prayers of the Coptic Orthodox church exhibit some variation in the selection of hymns and doxologies, but as with the other aspects of Coptic Orthodox prayer, much of the texts used by the church for her liturgical worship have no variety.

Very early on in my experience as an Orthodox Christian, I came to value this. It seemed to me from the first, when I became Orthodox, that the words of the prayers of the church are so rich that even a lifetime of use is not enough to plumb their depths. There is, as with all aspects of the Coptic Orthodox tradition of prayer, a clear sense that we truly enter into this tradition by careful attention to each detail, rather than by having a very wide and varied tradition which is never properly and intently grasped.

The Coptic Orthodox tradition is certainly a humble one, rooted in the monastic experience of the Egyptian deserts. I have found it to be fruitful in my own experience. It does not ask a great deal beyond prayerful and committed attention. Indeed, this is all that asks for. Its genius is that it is accessible to all of, including myself, and now I could imagine no other spiritual way. It has fulfilled and is fulfilling, all of those aspirations I had before I became a member of the Coptic Orthodox church. It is a humble tradition of prayer, but it is a means of great grace, as God wills, an infinite depth of the divine presence.

Delivered to you by COPTICNN™ | Coptic News Network on 2020-11-02 from Liverpool, England