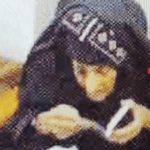 CHAPTER 5: The Departure of Nun Mariam

“…and you have persevered and had patience, and have labored for My name’s sake and have not become weary.” (Revelation 2:3)

Mother Mariam persevered through numerous trials and illnesses in great patience and without the slightest grumble. She did not complain when we saw her in pain on any day. Despite the various illnesses she had, she always refused to visit any physician or hospital. Instead, she put her confidence completely on our God, the True Physician.

Mother Mariam suffered from a number of major health issues:

Perseverance | Loss of Sight in One Eye Trial:

As a child, she lost sight in one eye, suddenly without a clear explanation, and the physicians were unable of providing any sort of treatment. By divine providence, she maintained sight in the other eye up until her departure, and with it, she saw everything. Not a single day passed when she complained or blamed this on our Lord.

For many years she had a weak hearing and was never upset about this trial. On the contrary, she used it to her spiritual advantage cautious on distancing herself from any kind of conversation capable of distracting her from the unceasing conversation she had with our God. You saw this in her lack of attraction and desire to engage in any conversation around her. However, she was always joyous and happy, and in unceasing silent prayers. Also, she refused to wash her ears or wear a hearing device.

She had this disease for a long time in her life which she used to treat it by herself through absolute stillness and was always very thankful. At no moment did she experience it as a hardship nor complain about it. Worst case scenario and when her chest asthma worsened, she personally treated it by placing herself in a still state until the attack passed.

She had a tumor in her hand called (hemangioma), which caused a deformity on her fingers and was very visible. She accepted this trial for a long period in her life without a worry, complaint, or fear. She never thought of receiving treatment for it or aesthetic surgery. At times the pain in her hand was excruciating but she hid it, afraid that anyone would notice. During those times when she was not in pain, she said, ‘It is good enough that I am not in any pain when I should be in pain’.

“I will greatly praise the Lord with my mouth; yes, I will praise Him among the multitude.” (Psalm 109:30)

She did not speak much, and it was partly due to her lack of hearing. You sensed that she enjoyed not having the ability to hear idle conversations because her heart was drawn to inner prayer. She did not enter any conversation when the subject was another person (gossip) throughout her time at the convent, nor did she engage in any convent politics whatever the situation may have been.

“And be kind to one another, tenderhearted, forgiving one another, even as God in Christ forgave you.” (Ephesians 4:32)

When Mother Mariam faced a situation where she was talked to harshly, her mind would not rest until she apologized. She even made a full prostration to the ground and said, ‘Forgive me, you are wise, and I am ignorant’, even if that nun was younger than her by generations. Sometimes she was in tears and wept to ask the individual for their forgiveness and reconciliation. She always felt that the person she was talking to was much better and spiritual than her and said, ‘I am a sinner and unrighteous’.

Translated by Michael Daoud. Delivered to you by COPTICNN™ | Coptic News Network on 2020-11-03 from Toronto. Canada