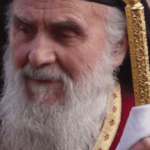 BELGRADE, President Aleksandar Vucic announced today that Patriarch Irinej, the head of the Serbian Orthodox Church, has died in a Belgrade hospital after contracting coronavirus “COVID-19”, following leading the open-casket funeral of a bishop killed by the virus.

Church bells tolled in Belgrade, and many people flocked to the capital’s main St Sava cathedral to mark his death at the age of 90, a decade after becoming Patriarch.

In this hour of mourning, COPTICNN would like to express our heartfelt sympathy and spiritual closeness. We pray that the Lord of Life, in his goodness and mercy, may receive him into his heavenly homeland and grant him the reward prepared for the faithful servants of the Gospel. COPTICNN | Coptic News Network Association

Patriarch Irinej, who was 90, led an open-casket funeral service for the church’s top cleric in Montenegro, Metropolitan Amfilohije Radović, on November 1. Three days later, Irinej was admitted to the hospital after testing positive for Covid-19 on November 4 and had been in a military hospital in Belgrade since then. He was placed on a ventilator after his condition deteriorated on Thursday. His departure was announced on Friday.

Bishop Amfilohije’s body had been displayed in an open casket during the service before being interred in the crypt of the Church in Podgorica, Montenegro.

At Bishop Amfilohije’s funeral, a large crowd had gathered, with only a few of the attendees inside the building wearing face coverings. Video of the service showed mourners kissing the deceased cleric’s hands and forehead, as is custom.

None of the priests, including Patriarch Irinej, who performed the liturgy, wore masks.

Patriarch Irinej is the highest-ranking figure in the Eastern Orthodox Church to have died from the coronavirus infection.

“I was honoured to know you. People like you never depart,” President Vucic wrote on his Instagram account under a black and white photo of Irinej.

In a statement, the Serbian Orthodox Church said the Patriarch “rested with the Lord” and will announce the funeral’s details in due course.

The Serbian government has declared three days of national mourning, set to last until Sunday.

The Serbian Orthodox Church has around 12 million followers, mainly in Serbia, Montenegro and Bosnia, and dioceses in the United States, Australia, and Western Europe.

Born Miroslav Gavrilovic on August 27, 1930, in a village southwest of Belgrade, Patriarch Irinej was enthroned as the spiritual leader of Eastern Orthodox Serbs in 2010.

This year and last, the Serbian Orthodox Church played a pivotal role in protests over a law on religion in Montenegro, allowing the state to seize some religious property. After the demonstrations, the opposition won a parliamentary election.

Patriarch Irinej backed Serbia’s attempts to join the European Union “if the EU respects Serbian identity, culture and religion.” He opposed abortion and gay rights as a “deviation of human nature.”

Church figures in South-Eastern Europe have struggled to respond to the pandemic. Earlier this week, a funeral was held in Greece for a senior cleric who insisted on maintaining communion ceremonies during covid-19, claiming no risk of infection.

The death of Metropolitan Bishop Ioannis of Lagadas, 62, came amid a spike in infection in Northern Greece.

The head of the Greek Orthodox Church himself was admitted to the hospital with mild coronavirus symptoms.

However, the Church’s Holy Synod has rejected communion criticism, which involves bread soaked in wine being handed out from the same chalice.

The election of the new Patriarch among bishops will take place in the coming months.

Delivered to you by COPTICNN™ | Coptic News Network on 2020-11-20 from California, United States of America