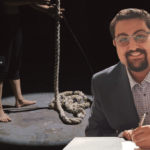 Sins Circle! Despair and losing hope in one’s salvation, and thinking that one has no chances left, are thoughts that cross numerous people’s minds. These thoughts can arise due to different reasons, for instance; after committing a great sin, after being “addicted” to a certain sin or after seeing other people that are advanced in their spiritual lives. The feelings of despair arise after the sin itself, and in order to examine to what extent someone is “labelled” as hopeless, two Biblical characters will be examined in more detail. These two lived in the same period of time, in the same circumstances and with the same people. As it is more common in science, in order to compare two cases there has to be only one difference, and in this case, it is how these two characters acted after their sin.

“pay attention carefully. After the sin comes the shame; courage follows repentance. Did you pay attention to what I said? Satan upsets the order; he gives the courage to sin and the shame to repentance.” John Chrysostom. On Repentance and Almsgiving, Homily 8. | Sins Circle! Peter Vs. Judas Iscariot

Sin Circle | The Sin And Its Aftermath

Looking at the sin that both disciples have committed, they are more or less the same sin. Both betrayed Christ in a certain way; Peter denied him being associated with Christ, and Judas Iscariot handed Him over to the Jewish chief priests. Until this part of the story, both are at the same point. This gives rise to an interesting question, namely, how both dealt with the consequences of their sin. Looking in the Bible, we can find how both disciples handled the consequences of their sin. The Bible teaches us about Judas Iscariot handled the consequences of his sin that:

” Then Judas, His betrayer, seeing that He had been condemned, was remorseful and brought back the thirty pieces of silver to the chief priests and elders, saying, “I have sinned by betraying innocent blood.” And they said, “What is that to us? You see to it!” Then he threw down the pieces of silver in the temple and departed, and went and hanged himself. (Matthew 27:3-5).

Looking at Peter, the Bible tells us that he handled the consequence of his sin as follows:

As we can see, Judas realized his mistake and got depressed. It got to a level where he took his own life. Judas probably realized what the consequences of his mistake would be, and in order to avoid them, he took his own life. Peter, likewise, got saddened when he realized what he had done. The difference lies in how Peter handles his sadness, and how he used it for repentance. Peter, at first, returned to his old life as a fisherman, until Christ appeared to him and the disciples, and asked him an interesting question.

He asked him whether he loved Him. We can notice two important aspects of this question. First, like Peter denied Christ in public, he had to explicitly acknowledge Him in public as well. Second, as Peter denied Christ’s trice, he had to acknowledge Christ also trice. After getting asked in public, and not once but trice, Peter truly showed to have repented from his mistake, and thereby Christ took his hand and got him on his feet again.

The similarities between Peter and Judas are that they both deeply loved Christ, had betrayed Christ at some point, and after realizing their mistake they both regretted it. The difference, however, lies in how they dealt with their emotions afterwards; Judas hanged himself, and Peter returned, although saddened, to his former life. Judas brought himself into eternal damnation, while Peter started repenting and showing Christ, through his deeds, that he was a changed man. Peter, despite his grief and although consciously or unconsciously, did have some hope, even if it was minimal.

Thereby, Peter earned himself eternal life. While Judas could not imagine a scenario wherein he could deal with the consequences, or he thought that he couldn’t live with them, Peter started to struggle, first with himself, then with Christ. Peter kept going on, even though he was saddened by how things turned out, but he kept going on. He kept going on, despite his pain and his distress.

Eventually, him going on with his life was what had saved him. By continuing to struggle with himself, he found a way to make up for his mistake, namely through repentance. This situation is what truly illustrates the power of repentance; two disciples that lived somewhat the same lives, where together in the same environment, witnessed the same miracles, betrayed Christ in a certain way, yet one is in the Kingdom of Heavens and the other one is in eternal damnation.

Sins Circle | Translation To Our Own Lives

Let us take a closer look at our own lives. Where are we currently, and where are we heading? Who are we currently, and who do we aspire to become? Do we aspire to become Peter or Judas? Do we lose all hope after committing a sin, or do we still have some hope left? Furthermore, how comes that we prior to committing a sin we have the courage to commit the sin, and afterwards we feel the guilt and despair that we actually had to experience prior to committing the sin? St. John Chrysostom (407 AD) explains this saying

‘’pay attention carefully. After the sin comes the shame; courage follows repentance. Did you pay attention to what I said? Satan upsets the order; he gives the courage to sin and the shame to repentance. There exist a wound and a medicine. The wound has the rottenness; the medicine can clean the decay. Could the decay be derived from the medicine, the cure from the wound? Do these things not have their own order and those things theirs? Is it possible for this to pass over to that, or that to this? Never!” [John Chrysostom. On Repentance and Almsgiving, Homily 8.]

What St. John Chrysostom is trying to explain is that the devil portraits things in an exactly opposite manner than they truly are, and he, therefore, tries to help us renew our vision.

There are numerous youths living in constant despair, whatever the reason may be, and they wonder whether God will accept them (again) after their sin. There are several wrong assumptions made, altogether leading to this conclusion. The first one is that one ought never to make any mistake. Although we try our best, no one is without sin (Romans 3:10-12). We ought to stop viewing things in black and white; until our last breath, we will never be doomed or predestined to fail, there is more to it. The second one is that things are permanent.

So if I would commit a great sin today, than I would never be able to restore my relationship with God, even if I would move mountains. This, again, falls under the refutation of the result of our sins being permanent. The third one is that God is angry at us and that He stays angry whenever we make a small mistake. This idea is the most common among the youth; what if God is permanently angry with me, and whenever I fail to live up to His standards He will get angrier with me? This one in particular is refuted by St. Clement of Alexandria (215 AD). He said, regarding this matter, that:

‘’He welcomes the repentance of the sinner—loving repentance—which follows sins. For this Word of whom we speak alone is sinless. For to sin is natural and common to all. But to return [to God] after sinning is characteristic not of any man, but only of a man of worth” [Clement of Alexandria. The Instructor, Book 3, Chapter 12].

Furthermore, St. Paul the Apostle teaches us that

Now I rejoice, not because you were grieved, but because your grief led to repentance; for you felt a godly grief, so that you were not harmed in any way by us. For godly grief produces a repentance that leads to salvation and brings no regret, but worldly grief produces death. For see what earnestness this godly grief has produced in you, what eagerness to clear yourselves, what indignation, what alarm, what longing, what zeal, what punishment! At every point, you have proved yourselves guiltless in the matter (2 Corinthians 7:9-11)

It must be said that Judas did not take his life due to pathological reasons, such as mental illness, but rather due to him not wanting to face the consequences of his actions. The church looks different at those that took their own lives due to their illness and to those that do not want to live with the consequences of their actions. Someone that took his own life, and had been working (actively) on himself, is not regarded as someone that committed suicide.

Someone that tried several therapeutic interventions, such as psychotherapy and/or medical interventions, did in fact fight against his mental illness. If that person takes his own life, then it is as if he has lost the battle to his disease, just as those that died from other diseases such as heart failures or cancer. Pope Shenouda III said about this:

‘’Suicide is a form of murder. Man does not own his own life nor does he have the liberty to do anything he likes with it. It is owned by Christ, for when He redeemed our lives by His own Blood, He bought man’s life which then became His. He created it from nowhere. It is a gift that cannot be thrown away but should be used for the glory of God’s name.

That is why the Church does not conduct a funerary mass for an individual who commits suicide, simply because death takes place after the commission of a crime of murder. Such a person dies after committing a sin which he does not give himself a chance to repent for. Still, we can make an exception to this rule in the case of a person who proves to be completely insane when committing suicide, since an insane person should be absolved from whatever wrongdoing he does” [Pope Shenouda III. The Ten Commandments, Volume III, Chapter 6.]

And concluded it with the following words:

” God alone knows all the facts of the suicide victim’s circumstances, and thus He alone judges according to His infinite wisdom, mercy, and justice. As such, we should not conclude upon the fate of a particular suicide victim, we only speak in general according to Church tradition and authority” [Idem]

Delivered to you by COPTICNN™ | Coptic News Network on 2020-11-24 from Kudelstaart. Netherland.

0 0 0
Previous : A Living Christology
Next : The 1960s: Relief And Progress Under Pope Kyrillos VI | The Coptic Modern Era
Wasim Shehata