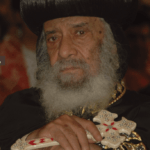 The 1970s Into the 21′ Century: Pope Shenouda’s Charisma | The Coptic Modern Era

The 1970s: Pope Shenouda’s Charisma And Relations With The Nation And The World

Pope Kyrillos passed away on March 9, 1971. The nation and the church mourned. He was a spiritual icon for both. In order to elect a new pope, the 1957 patriarchal election law was applied for the second time. The new patriarch, Pope Shenouda III, was enthroned in an international event on November 14, 1971, broadcast live on national television (van Doorn-Harder 2011:155 – 58).

During his first year in oﬃce, Shenouda gained the admiration of most sectors of Egyptian society. He was a man with many talents and diverse experience, both secular and religious: desert hermit, spiritual leader, poet, a scholar of Christianity and Islam, revolutionary, charismatic speaker, and embodiment of Coptic identity, which worked for national unity. He masterfully crossed barriers of race and religion and reached out with goodwill and hospitality to all. His publicized program was versatile, and, for a time, it seemed as though the situation of the Copts in Egypt was transitioning from good in the 1960s to better in the 1970s.

On the national front, the possibilities for Coptic participation and action were also unprecedented. During 1972, the patriarch was invited to write a weekly column in Al-Gumhurıa, the third-largest daily newspaper in Egypt. At the outbreak of the October 1973 war with Israel, Shenouda astonished all sides by volunteering his service as a former army reservist. Such a gesture, though it did not materialize, was broadly welcomed to raise morale. The state solicited his presence and speeches on various national occasions, and his contributions were meaningful and significant.

As the patriarch of the largest Christian church in the Middle East, Shenouda’s visits overseas were of great religious and political significance. He became the first Coptic pope in over 1,500 years to visit the Patriarch of Constantinople(1972) and the Pope of Rome (1973), as well as the first-ever to visit the Patriarch of Moscow (1972) and the Archbishop of Canterbury (1979). He worked toward ecumenical unity with other orthodox churches and participated in dialogues with Catholic and Protestant churches.

During his visits abroad, he was welcomed by many presidents, from Assad of Syria (1972) to Jimmy Carter (1977) and George H. W. Bush (1989) at the White House(Abdelsayyed 1981). Even then, Colonel Gaddafi, the strong advocate for an Islamic state, invited Shenouda to address a political convention in Libya in 1972 (Abdelsayyed 1976).

In the early years, Anwar Sadat and Shenouda seemed to cooperate and even admire each other, but three major issues problematized relations to the point of no return: 1) how to overcome discrimination and violence against the Copts, 2) the extent of applying Islamic law to the Coptic minority, and 3) the exploitation of Copts in the normalization of relations with Israel.

The 1970s were an intensely dynamic decade for Egypt. Sadat, who became president in October 1970, embarked on a new strategy for Egypt: to gradually replace Nasser’s Arab nationalistic, secular, and socialist system with an Egyptian nationalistic, Islamist, and capitalist one. A thriving Coptic Church with a talented patriarch was both an asset and a liability for the new strategy.

The nation also struggled because of an impasse with Israel, which had occupied Sinai since the 1967 war. A blend of Westernization and Islamization must have seemed a good strategy for Sadat. For this reason and to combat his Nasserist opponents, Sadat allowed the religiopolitical organization, the Muslim Brotherhood, to resume its activities in Egypt after Nasser had banned it in 1954 (Heikal 1983: 116-27).

As byproducts of Islamization began to emerge, Coptic representation in the government fell noticeably and precipitously. For the first since their inception in 1886, the parliamentary elections of 1976 did not produce any Coptic members. Similar declines, also the result of increased Islamization, were observable even at entry-level positions in many key fields such as the armed forces, the police, the judicial system, the diplomatic corps, and academia.

Beginning with the destruction of a church in Al-Khanka in 1972 (ibid. 162), acts of violence against Copts and churches escalated in frequency and magnitude of harm. Textbooks and the media frequently ridiculed Christianity and stereotyped the Copts. Sermons in mosques routinely damned the Copts along with Jews and Americans. Discrimination was-and still is- openly or covertly practiced in many aspects of life.

Since 1972, in a period called the “era of the martyrs” (Watson 2000: 142-50), more than fifty significant cases of violence against Coptic communities, as well as prevalent discrimination, have been extensively reported in the media and by scholars and commentators (Thomas and Youssef 2006; also see Minorities at Risk Project 2004). The Copts, however, have persisted, survived, and even thrived despite challenges to their lives and civilization.

In 1980, a new Egyptian constitution made Islamic Shari’a the primary source of legislation. The patriarch voiced his opposition to the next imminent step: complete Islamic law application on all citizens in all aspects of life (Hasan 2003: 108). Shenouda also opposed Sadat in his move to make Copts the prototype for the normalization of relations with Israel while the peace treaty, signed on March 26, 1979, was being negotiated. The proposed first step toward normalization was for the Copts to pilgrimage to Jerusalem since this had been closed to them since the Six-Day War.

Shenouda’s fears were based on a historical record in which even the perception of an association with foreigners, not to mention a former enemy, was perennially a motivation for, or a pretext to justify, acts of violence against Christian minorities in the Middle East (Heikal 1983; 219-21). After Foreign Minister Ismail Fahmi resigned in protest against Sadat’s intention to visit Israel in 1977, Sadat appointed a Copt, Boutros Boutros Ghali, to serve as Minister of State for Foreign Affairs and accompany him to Israel and later negotiations.

In June 1981, a severe attack on the Copts in Zawya El-Hamra, a district of Cairo, resulted in hundreds of Copts being murdered and injured. The government was passive during and after the slaughter. Copts in America protested against Sadat during his August 1981 visit to the White House (ibid. 222-31; Scott 2010: 73). The atmosphere became volatile, and Islamists continued their campaign against the Copts and Sadat’s peace with Israel. Sadat apparently perceived that a government attack on the Copts would punish the uncooperative patriarch and camouflage his own simultaneous attack on the Islamists.

On September 5, 1981, he placed the patriarch under house arrest in St. Bishoi Monastery and ordered the imprisonment of eight bishops, approximately 160 priests, 1,500 Coptic Activists, 5,000 Muslim clergy and fundamentalists, and 200 prominent politicians (Heikal 1983: 227-41). On October 6, 1981, a group of Islamists assassinated Sadat while he was on a viewing stand celebrating the anniversary of the 1973 war. The Copts had a sense of divine providence, the Islamists rejoiced in a mission accomplished, and the enemies of the peace treaty celebrated throughout the Arab world.

President Hosni Mubarak inherited the complicated legacy of Sadat: its outstanding achievements and its costly mistakes. In response to the Coptic-Muslim crisis, Mubarak was slow to release Coptic prisoners and even slower to return the bishops and Pope Shenouda to their sees. International pressure was evaded for years on the pretext that the imprisoned and exiled were safer due to Islamist threats and the possibility of communal unrest. Eventually, the patriarch acquiesced to several unjust conditions for his release, including regular trips to the monastery and a requirement to vacate Cairo on Fridays, the Muslim holy day (Watson 2000:116).

After 1,213 days under house arrest, Pope Shenouda’s first public appearance was the midnight Christmas liturgy at Cairo Cathedral on January 7, 1985. His relations with the state, al-Azhar, society, and the world went from good to excellent in the years after his release. He has been tireless in cementing national unity and has received several international awards for his role. The last was the 2011 Augsburg Peace Prize, awarded in Germany every three years to an individual who has contributed significantly to the cause of peaceful coexistence between different faith communities.

To be continued next, “National and International Achievements Despite Hardships.”

Delivered to you by COPTICNN™ | Coptic News Network on 2020-12-04 from Los Angeles, United States of America

The 1970s Into the 21′ Century: Pope Shenouda’s Charisma | The Coptic Modern Era

0 0 0
Previous : Morality Without God Is Without Meaning
Next : Making Life Choices With God
Michael Saad