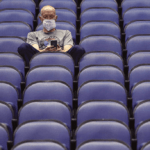 The Premier League expects to restart the season in June with matches to be played without fans at stadiums, while the second-tier Championship clubs will decide this week on how to presume the season.

Since March, professional soccer has been halted due to the COVID-19 pandemic, and Euro 2020 was suspended with no clear date set for a return. Players are concerned about their careers and some have become discouraged.

“There are financial circumstances with clubs furloughing players, there is a deferral of wages. We’ve got numerous players who are living from paycheque to paycheque and this is having a substantial impact on them emotionally,” he added.

“Also health concerns – if we do go back to the season, can it work? Will it work? All those sorts of ‘what if?’ questions kept coming up.”

However, UEFA president Aleksander Ceferin is confident “good old football with fans will come back very soon” despite the chaos caused by the coronavirus pandemic.

The Bundesliga made a strong return back to playing the game behind closed doors at the weekend and several other leagues are preparing to reopen even in front of empty stands, with Ceferin sure the situation will soon improve.

Ceferin said soccer would follow the advice of the authorities but he was trusting that normal setting could be resumed shortly.

Asked whether he would trust that Euro 2020 would be played in 2021, the chief of European football’s governing body told the Guardian: “Yes, I would. I don’t know why it wouldn’t be.

“Soccer didn’t change after the Second World War or First World War, and it will not change because of a virus either,” Ceferin said

And Ceferin said he did not expect the game to be profoundly altered by the coronavirus. “Soccer didn’t change after the Second World War or First World War, and it will not change because of a virus either,” he said.

In Barcelona, Spain (AP) — The soccer league in Spain will resume on June 8, Spanish Prime Minister Pedro Sánchez said Saturday. While the top tier, La Liga, can play from this date, it has already said it wants to resume play on June 12. It is unclear when the first games will be held. There has been no play in the top tier due to the coronavirus crisis since March 12. Teams have recently returned to training at club facilities, but with players practicing individually.

The protocols for small group training — while maintaining social distancing — beginning Tuesday were passed unanimously in a vote by the clubs during a conference call after the government loosened lockdown restrictions in England last week.

Up to five players will be permitted to work together on a pitch, according to training plans released by Newcastle. The northeast club will conduct a rotation that will guarantee only 10 players maximum are at the training ground at any one time.

“A player has a quarter of a pitch to work within, so social distancing is not a problem,” Newcastle manager Steve Bruce said. “We’ll train with eight to ten at a time on two separate pitches. Everything is in place toward the safety aspect. I’ve got no issues and I can tell the supporters the players and the staff are as safe as we possibly can be.

While in Madrid, the Spanish league took an extra step toward restarting the soccer season by allowing teams to resume group training on Monday.

Practice sessions were closer to routine as players were permitted to work in groups for the first time since the league was suspended in mid-March because of the coronavirus pandemic.

In Berlin, Germany, the Bundesliga became the first top soccer league to resume over the weekend.

In Australian, Australian Football League chief executive Gillon McLachlan on Friday rules football will kick off again on June 11. The AFL, Australia’s most-watched sports league in terms of attendance and TV audience, was suspended on March 22.

In Berlin, after a meeting between German Chancellor Angela Merkel and the country’s 16 state governors, clubs were informed to resume the season under empty stadiums picking up right where it left off two months ago.

Soccer in Europe takes measures toward the return

In Madrid, the AP reported seen soccer players in Spain returned to their team’s training camps Wednesday for the first time. Players for Barcelona, Real Madrid, Atlético Madrid, and other clubs were all expected to be tested for COVID-19 and should be cleared to practice once the results are back.

Notably, many of the Spanish soccer players did not wear masks or gloves when they arrived, according to local media. Lionel Messi, Gerard Piqué, and Luis Suárez were among those without masks when they drove into Barcelona’s training center. Antoine Griezmann, Arturo Vidal, and Ivan Rakitic did wear masks. Sergi Roberto arrived without a mask but had one on when he left.

In Berlin, German Chancellor Angela Merkel says the Bundesliga can resume this month.

While in Ankara, Turkey, the Turkish soccer league intends to resume on June 12. Turkish soccer federation president Nihat Ozdemir said Wednesday he wishes to finish the season by the end of July and host the Champions League final in Istanbul in August.