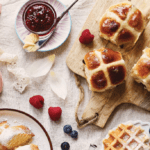 Embarrassing “J” In The Pagan Easter Eggs and Chocolate

From Ishtar to Eostre, the roots of the resurrection story go deep. In numerous cultures for thousands of years, a celebration of seasonal renewal has taken place about the time of the Spring. The name “Easter” was reaped from a Saxon word “Eostre,” denoting a goddess of the Saxons, in honor of whom sacrifices were offered about the time of the Passover.

Some argue that even the Christian version of Easter merely perpetuates an age-old, familiar theme of resurrection rather than honoring an actual person or event in history.

The Pagan Roots of Easter

According to an ancient “Sumerian legend of Damuzi (Tammuz) and his wife Inanna (Ishtar), […] Tammuz dies, Ishtar is grief-stricken and trails him to the underworld.” Here, “‘naked and bowed low’ she is judged, killed, and then hung on display. In her loss, the earth misses its fertility, crops halt to grow and animals quit reproducing. Unless something is done, all life on earth will end.”
Inanna is missing for three days after which her assistant seeks help from other gods. One of them goes “to the Underworld” provides Tammuz and Ishtar “the power to return to the earth as the light of the sun for six months.

After the six months are ended, Tammuz returns to the underworld of the dead, residing there for another six months, and Ishtar pursues him, urging the water god to rescue them both. Thus, were the cycles of winter death and spring life.” Since this myth was discovered on tablets dating back to around 2500 BC, Tammuz and Ishtar might be the protagonists of the first pagan Easter story.

Since the myth was discovered on tablets dating back to around 2500 BC, Tammuz and Ishtar might be the protagonists of the first pagan Easter story.

Jesus! A Hero Among Many

One writer draws “resemblances between the story of Jesus and the epic of Inanna.” This “doesn’t inevitably mean that there wasn’t a real person, Jesus, who was crucified, but rather that, if there was, the story […] is structured and embellished setting a pattern that was very ancient and widespread.”

Other sacrificial heroes have included Attis, lover of Cybele, both of them gods, but Attis “was born of a virgin.” “Attis was Cybele’s lover, although some origins claim him to be her son.” Attis “fell in love with a mortal and chose to marry.”

In response to Cybele’s rage, Attis “fled to the nearby mountains where he increasingly became insane, ultimately committing suicide.” She regained her sanity, and “appealed to Zeus to never allow Attis’s corpse to decay.” Every year, “he would return to life through the yearly rebirth of vegetation; thus identifying Attis as an ancient dying-and-reviving god figure.”

Other gods linked with resurrection include Horus, Mithras, and Dionysus. “Dionysus was a divine child, resurrected by his grandmother. Dionysus also brought his mum, Semele, back to life.” The Sumerian goddess Inanna, or Ishtar, was hung naked on a stake and was subsequently resurrected and ascended from the underworld.

Jesus, the One and Only True God

Many of these Easter tales are similar to Christian chronicle. Jesus was born of a virgin; He died on a cross and was resurrected. But there are foreshadows of the crucifixion from Genesis to Malachi; in Sarai’s barren womb brought to life; in desert springs (Isaiah 43:19), Ezekiel’s dry bones; and the Passover. The undivided Bible is God’s narrative of Jesus — not a fictional story, but the account of creation, fall, and redemption.

Events in Genesis are dated to before 4000 BC, and the offering of Isaac to around 2054 BC. These stories predate some pagan mythology and are synchronous with other myths. Still, when men and women worshipped false gods, the Lord had the last word.

The point was “God, Himself, was confirming He reigns supreme over any false gods who try to usurp Him.”

It is also no accident that Christianity persists today with the number of believers rising daily, two millennia after Christ’s death and resurrection.

Christ’s existence is historically verifiable, and His resurrection is backed by evidence.

The Old Testament holds extraordinarily covenant to Jesus-shaped.” He was “patterned,” “promised,” and “present” even before the Virgin Birth.

Hereabouts, “God promises ‘the seed of the woman,’” the offspring which “would crush the head of the house of the wicked” but “at a high cost to himself.”

Christ is patterned, promised, and present with Abraham and Isaac, at the Exodus, and numerous other accounts in the Old Testament.

While pagan gods were remote and impotent, the Christian God is omnipotent yet personal. Christ was the utter sacrifice for all sin, for all time, for all who believe; not as a piece of a seasonal cycle.

Christians die to sin, share in Christ’s suffering, and inherit the Kingdom of Heaven as co-heirs with Christ. They possess the hope of eternal life. It’s no fluke that Jerusalem would be built on the site where Isaac was nearly sacrificed. Where, outside the city gates, Jesus was crucified.

“Easter” is only a name, adopted and modified over centuries to become a Christ-centered reference until recent generations where many young people no longer acknowledge the name of Jesus as anything more than an expletive.

Using the name Easter “is not an enigma” because “the origin of the word does not mean that the word is bad. “Then, we may want to “be consistent and avoid using [pagan] words,” Christians will also have to attain new names for the planets and the days of the week.

In Easter, “Christians remember that Jesus, after dying on the cross, rose from the dead, showing that life could win over death. For Christians, the egg is a symbol of the tomb […] while cracking the egg represents Jesus’ resurrection. In the Easter Orthodox tradition, eggs are coated red to symbolize the blood Jesus shed on the cross.” Easter traditions can be redeemed, and the fun of Easter is still permissible.

If you have not ascertained out that Christ crucified is the roots of the whole volume, you have read your Bible hitherto to very limited profit.

Without the “J” in it, religion becomes heaven without a sun, an arch without a keystone, a compass without a needle, a clock without spring or weights, a lamp without oil.”

Mythology has bequeathed us with painted eggs and chocolate: short-term amusement, nothing as the joyous or lasting as a believer’s hope in Christ.

Delivered to you by COPTICNN™ | Coptic News Network on 2020-05-22 from Saskatoon, Canada

Embarrassing “J” In The Pagan Easter Eggs and Chocolate