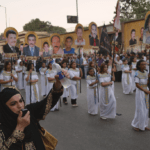 In modern times, waves of Coptic immigration have been motivated by various factors: the revolution and land reform in the 1950s, socialism and wars in the 1960s, and the continued rise of Islamization and Violence against Copts since the 1970s. In response to the first wave of Coptic immigration, Pope Kyrillos VI ordained Bishop Samuel in 1962 for Social and Ecumenical Services, including pastoral care of the Copts in Europe, America, and Australia. Exponential growth, however, came with the stronger immigration movement in the 1970s.

“These realities in Egypt and the expanding Diaspora have ushered in a new era in the Copts’ history, marked in equal measure by tribulation and struggle, agony and anticipation, resilience and revival, challenge and opportunity.” The Coptic World Development | The Coptic Modern Era.

As a result, and because of Pope Shenouda’s personal involvement, the Coptic church in the Diaspora has blossomed into seventeen dioceses, several hundred parishes, some dozen monasteries, twelve seminaries, and numerous benevolent, educational, and media organizations. The United States is home to the largest number of Copts outside Egypt (Saad 2013, 2010; Guirguis and van Doom-Harder 2011: 179—82, 1997: 255—72; Atiya 1991: 1620—24).

Following the Coptic legacy of missionary work, Pope Shenouda ordained Bishop Antonious Markos in 1976 for missionary work in Africa. He ordained Bishop Paul in 1995 for the region of Eastern and Central Africa. Their efforts have successfully established sixty-five churches, three monasteries, and many medical centers and schools. Many Copts, including second-generation immigrants, travel from one continent to another to work as volunteers in these and other missionary centers (Watson 2000: 72—92).

As the Copts spread across the world, they have carried rich traditions of art, architecture, literature, language, spirituality, and music. These treasures are preserved and propagated by immigrants and second-generation Copts in a number of settings, including homes, churches, community centers, films, and social media outlets, not to mention in universities through specialized programs of Coptic studies, Due to these developments, the world is discovering more aspects of Coptic civilization (Saad 2013, 2010).

The revolution that began in Cairo’s Tahrir Square on January 25, 2011, and led to the end of the Mubarak era on February 11, 2011, opened a new Chapter for women, Copts, and other minorities in Egypt, one which at present, however, does not seem promising. Copts participated in the protests from the beginning and arguably even inspired the revolution itself. As a result, there was an initial surge of nationalistic unity between Copts and Muslims, sparking hope for a real democracy in which women and minorities could enjoy fundamental human rights.

New Challenges, however, quickly and ferociously emerged, especially for two groups. Female protesters are exposed to public humiliation by state forces, including Virginity tests, sexual assault, and beatings. Unfortunately, daily life has become increasingly difficult for the Copts and thirteen major attacks on groups, communities, churches, and monasteries in 2011 alone.

On October 9, 2011, the worst of these occurred when three army tanks plowed down unsuspecting Coptic demonstrators in front of the Egyptian Television Network building on Maspero Street. The tanks and subsequent shooting killed twenty-seven people—all Copts—and injured hundreds more. The attacks continued for twelve hours in the neighborhood; it even took place against the wounded and their families at the Coptic Hospital.

In defiance and triumph over evil, 70,000 people attended a twelve-hour special religious vigil held on November 11, 2011, at St. Simeon the Tanner Monastery in Mukattam, just outside Cairo. The Copts on that night, as always, took seriously the call to “Love your enemies and pray for those who persecute you” (Matthew 5:44 NRSV). Many Muslims participated in the demonstration and vigil in solidarity with the Copts.

Copts and progressive Muslims have demonstrated their commitment to civil society by creating political parties such as the Free Egyptians Party, which led the liberal Egyptian Bloc coalition in the 2011 parliamentary elections. However, the election results only confirmed the plight of women, Muslim liberals, and minorities. Only eight women and six Copts (including one Coptic woman) from all parties won seats in the 498—member People’s Assembly.

A total of thirty-four from the Egyptian Bloc were elected, including nineteen Free Egyptians, while the Islamists won more than 72 percent. Though disenfranchised, Copts and liberal and secularist Muslims continue to present a significant moral and electoral force in preserving democracy and guarding Egyptian national identity.

Their goal is to ensure that Egypt does not succumb to Islamist forces that might transform the nation into a theocracy. It remains to be seen, however, whether the Copts will feel empowered and continue to contribute to their society in the newly emerging political environment, or whether they will be silenced by intimidation and threats of violence, in response to which many have already resorted to emigration (Lagnado 2011).

Modern Coptic history is an essential lens through which to situate and understand Egypt’s broader history, from Nasser’s revolution in 1952 to the people’s revolution in 2011. The productivity and resilience of Copts during those sixty years stand as a counterpoint to the declining pluralism in education, media, and politics in Egyptian society; national politics have shaped Coptic history.

It is also true that the Copts are holding fast to ideals including freedom of worship, human rights, women’s rights, and nation-building, which have in turn constructively and creatively influenced contemporary Egyptian history and civilization.

It is also the case that Coptic identity has, in no small part, continue to be shaped by the personalities and leadership principles of the patriarchs during this era, all of whom continued to be politically engaged for the sake of their ﬂock. To an increasing degree, these patriarchs have had to maintain cordial relations with the state and reconciliatory tones in the society while simultaneously sympathizing with the injustices toward Copts.

At the most basic level, however, the church’s daily function has in large part been to help the Copts navigate between their personal, community, religious and social identities.

Suppose the 2011 revolution has demonstrated the latent energy of Egyptians to fight injustice. In that case, it is not surprising that the increasing and disturbing levels of intolerance against religious minorities, women, and liberalism have been countered by a deepened Coptic spiritual life, resolve to fight for and defend human rights, and improved ecumenical outreach. The revolution also strengthened traditional alliances between the Copts, women’s rights advocates, and progressive Muslims—all fighting together for a genuinely democratic and Civil society.

These realities in Egypt and the expanding Diaspora have ushered in a new era in the Copts’ history, marked in equal measure by tribulation and struggle, agony and anticipation, resilience and revival, challenge and opportunity.

Delivered to you by COPTICNN™ | Coptic News Network on 2020-12-21 from Los Angeles, United States of America

The 1960s: Relief And Progress Under Pope Kyrillos | The Coptic Modern Era

0 0 0
Previous : Salvation Is Not A Moral Problem
Next : God, why are You Hiding?
Michael Saad