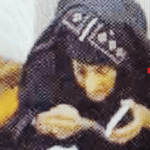 “Mother Mariam never left the convent because she did not desire to ever return back to the world or the streets; for she truly lived as one dead to the world.” Mother Mariam Departure | Book “Life Of Prayer And Praise”

“…as poor, yet making many rich; as having nothing, and yet possessing all things.” (2 Corinthians 6:10)

Despite coming from a large wealthy family, Mother Mariam was always simple. She did not request anything for her cell nor its renewal or painting throughout her monastic life…not even the essential things. Her cell was very simple but full of many blessings through her continuous prayers and the Saints’ attendance within it.

She rarely took a bath but had a beautiful aroma; the aroma of the struggle and asceticism.

Sometimes the convent library showed video films on the lives of the Saints or other recordings of a religious nature. When the nuns asked her to join them (the library was next to her cell); she politely refused. Mother Mariam lived a life of unceasing inner prayer and did not want to be distracted by any sort of thing.

Mother Mariam took up an ascetic way for herself which stayed with her throughout her monastic life for more than 50 years. She did not eat food which contained salt or sugar, fried food nor treats, and was convinced that did not benefit one’s health. This goes back to her spiritual way of life, high asceticism and firm principles.

‘Strength is from Jesus. Does food give strength? My daughter, it not by bread alone that man lives.’ She always said this saying or phrase which was a maxim in her life.” Mother Mariam Departure | Book “Life Of Prayer And Praise”

Many times, this was not sufficient deprivation for her, so she poured water on her food causing the food to lose its taste and then ate. The kind of food Mother Mariam ate was not desired nor eaten by anyone else. Her food was very light, and she was thin, nonetheless she was very lively and active.

When the nuns advised her to take care of her body because it was weak and become merely skin on bones she answered, ‘It is so that when the worms arrive, they won’t find anything to eat.’ She said this with strength and certainty, as one who knew precisely what they were doing.

Another time one of the nuns told her ‘Mother Mariam, you have to eat well. Be healthy.’ Her response was: ‘Strength is from Jesus. Does food give strength? My daughter, it not by bread alone that man lives.’ She always said this saying or phrase which was a maxim in her life.

She did not like to sleep until the end of her days which was unlike someone of her age and said, “Being awake is good, I don’t like sleep’. She did not use many blankets, for truly, she was a struggling nun.

“Since you have purified your souls in obeying the truth through the Spirit in sincere love of the brethren, love one another fervently with a pure heart…” (1 Peter 1:22)

Mother Mariam lived during the generations of Tamav Kyria and Tamav Yoanna (former abbesses of the convent), and was submissive to them in reverence, humility, and perfect love despite the very strong personality she possessed. She was strict with herself when she took orders and humbled herself before any nun responsible for any kind of work in the convent, even if that nun was younger than her by years. Truly, she was an exemplary nun.

She was very obedient to the procedures of the Church. From her childhood she prayed the prayer called “St. Mary, Dissolution of Iron Prayer”. When H.H. the Pope announced of the different doctrinal errors contained in that prayer and Mother Mariam discovered this news; in that moment and time she said, ‘H.H. the Pope is the head of the church, he is right,’ and from that moment on and she stopped saying the prayer altogether.

Mother Mariam | Firm in her Principles

“When a sieve is shaken, the refuse appears; so do a person’s faults when he speaks.” (Sirach 28:4)

Mother Mariam had a strong personality, and no one was capable of discouraging her from following any sort of principle she chose to abide by within her monastic life. She followed strong principles, had a clear aim in all her dealings and showed no favoritism to anyone per the custom of her spiritual life. Mother Mariam never left the convent because she did not desire to ever return back to the world or the streets; for she truly lived as one dead to the world.

Here we will recite some examples:

When Tamav Yoana took on the responsibility of the convent, Tamav Irene (abbess of the convent of St. Mercurius) invited the nuns to come spend a week or more at the convent of St. Philopateer Mercurius during the summer of each year, to the North Coast in Kreir. The nuns spent and enjoyed beautiful spiritual retreats there. However, despite Mariam’s love for St. Philopateer Mercurius and Tamav Irene, she refused to leave with the community of the nuns when they travelled.

Moreover, when H.H. Pope Shenouda invited them to his residence at St. Bishoy’s Monastery in 1998, she did not want to go and stayed at the convent in her cell. Also, she never contemplated visiting the convent’s agricultural land in Khatatbah, even though she was happy with the work done there and prayed for the nuns who carried out this work.

In the last year her life before her departure and when she was ill and her situation worsened, she was in need of being transported to the hospital immediately, but she persistently refused. Due to the convent’s concern for the health and well-being of Mother Mariam, the doctor ordered that she receive treatment to manage her situation before is taken to the hospital. There also see was cautious on following her vows and refused to see the visitors who came to receive her blessing. Indeed, she was a strong nun.

She took up the decision in the last year to no longer go down the stairs to the convent’s courtyard and fully carried this out saying, ‘I promised my God I wouldn’t go downstairs anymore’. During the prayers of the divine liturgy she prayed with reverence in her cell and partook of Communion in a special room located on the second floor next to her cell.

When her family visited to check on her and take her blessing, or any visitor from the convent’s regular visitors, she refused to go down to the courtyard to meet them. On very rare occurrences she met them was on the second floor in a simple room.

Translated by Michael Daoud. Delivered to you by COPTICNN™ | Coptic News Network on 2020-11-03 from Toronto. Canada

0 0 0
Previous : When is the right Christmas?
Next : Tolkien, Meekness And The Christian Message Of Hope.
Michael Daoud