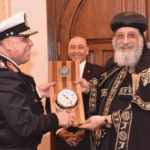 Delivered to you by COPTICNN™ | Coptic News Network on 2020-05-07 from Alexandria, Egypt

“Epiphany Well-Wishings By The Naval Forces Delegation In Alexandria To His Holiness Pope Tawadros II” Ashraf Atwa, Chief of Staff for the Navy Forces

In Alexandria, Governor Abdul Aziz Qanswa, Head of Security Directorate Mohamed al-Sharif, Chief of Staff for the Navy Ashraf Atwa, and religious leaders and delegations from the Endowment Ministry, and Al-Azhar visited the papal seat headquarters of the Coptic Orthodox Cathedral to congratulate Pope Tawadros II of Alexandria on the Epiphany feast.

Pope Tawadros II, Coptic Orthodox Patriarch of Alexandria and all Africa, also received Theodore II and his accompanying delegation to congratulate him with the Epiphany feast.