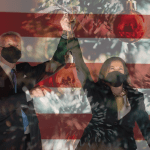 Jill and I wish a blessed Christmas to Orthodox Christians in the United States and around the world. This sacred season looks different this year; many families will grieve an empty seat at the table or forgo favorite holiday traditions to keep each other safe. Yet, as we mark the birth of Jesus Christ, we know that faith, hope, and love continue to light the way, even on the darkest of days, and they will sustain us through the most difficult trials.

As we honor the many contributions of Orthodox Christians in the United States and around the world, we reaffirm the right of all people to practice their religion as they choose and our commitment to stand with religious minorities who at times face discrimination and violence. With the hope of a new year before us, we join our Orthodox sisters and brothers in hopeful prayer for peace, justice, and healing the world over.

Joe Biden | The 47th Vice President of the United States

President-elect Biden represented Delaware for 36 years in the U.S. Senate before becoming the 47th Vice President of the United States. As President, Joe Biden will restore America’s leadership and build our communities back better.

At the Church of the Nativity, built over the West Bank grotto that Christians believe is the site of Jesus’ birth, Palestinian President Mahmoud Abbas attended Mass early Wednesday as well.

The Coptic Church recognizes January 7th as the day that Jesus was born. This is the same date as Orthodox Christmas. Elsewhere in the world, Christmas is celebrated on December 25th.

The Assyrian and Ethiopian churches also celebrate Christmas on the seventh, according to the Julian calendar.

Coptic Christmas was declared a national holiday in Egypt in 2005 by the government of Hosni Mubarak.