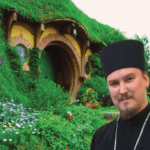 Tolkien, Meekness And The Christian Message Of Hope.

“We must take a hard road, a road unforeseen. There lies our hope, if hope it be.” Tolkien, Meekness and the Christian Message of Hope.

Last week a large part of the Orthodox world celebrated the Nativity, one of our great feasts. However on the 3rd January the literary world also celebrated an important annual event, the birthday of JRR Tolkien. One of my favourite genres is ‘High Fantasy’ and specifically the writing of JRR Tolkien, with his blending of his faith, life and interests into his writing. Having recently rekindled my love of his Lord of the Rings series, I was reminded of an important theme, the theme of having hope. Since recently we remembered the birthday of both our Lord and JRR Tolkien, I thought it apt to write this short reflection.

In the Christian faith, we hear of the term hope constantly, with the emphasis on God’s great love for us in the action of the Incarnation. This is expressed well in the First Epistle of Peter, in which we are reminded that God, “was manifest in these last times for you,  who through Him believe in God, who raised Him from the dead and gave Him glory, so that your faith and hope are in God.” However, unlike the traditional concept of the provision of hope in an almighty God, the Christian message of hope goes a step beyond and presents its message of hope through two unimaginable images; his birth and his eventual death.

Interestingly, in Tolkien’s “Lord of the Rings” this theme of hope promised through the unimagined is often expressed in a way that is highly relatable to Christians today, as it is expressed as coming in the meekest of beings and the darkest of journeys. To me, one of the greatest expressions of this hope is found at the Council of Elrond. For those who have not read the book, this is an event in which the Free peoples of Middle Earth meet to discuss what to do upon discovering the Ring of Power, which is a weapon of pure power and evil, often symbolic of sin or corruption which gives power but ultimately destroys.

Because of this, it is decided that the only possibility is to destroy it, by entering the land of Mordor, where the enemy resides. “We must take a hard road, a road unforeseen. There lies our hope, if hope it be. To walk into peril – to Mordor. We must send the Ring to the Fire.” In this we already see the resemblance to the Christian concept of Christ’s death and resurrection.

In both cases, hope is found in the darkest of situations through something which we would not usually seek as a form of hope. In the case of Middle Earth it is found in entering the very home of Evil, in the case of our faith it is found in the Death of Christ on the cross. As John Chrysostom stated in his Paschal Sermon, “Let no one fear death, for the Saviour’s death has set us free. He that was held prisoner of it has annihilated it. By descending into Hell, He made Hell captive.”  This expression of faith would seem utterly baffling to one outside of Christianity, however it is in this that we find the core of our faith as a truth.

Because of this, the concept of death becomes a promise of eternal life to Christians, as the death of Christ allows us a Salvation which we were promised, in the same manner as those attending the Council of Elrond found their Salvation only through the journey into the lair of their enemy.

The message of such a hope is vital to Christians today, since we are expected to take leaps of faith and take up our struggle in all we do. Christ reminds us in the Gospels, “If anyone would come after me, let him deny himself and take up his cross and follow me. For whoever would save his life will lose it, but whoever loses his life for my sake will find it.” This becomes even more prevalent when we witness the dedication to their faith of the many Martyrs of both the Early Church and even today. In this, the realisation of the call to the promise of eternal life becomes a reality and the hope of life after this becomes something to hold onto regardless of circumstance.

It is this very fact that makes it so profound. Knowing that our salvation came through Christ’s passion and resurrection gives hope that God is there, and that even in the darkest of times there is a light and that that light is God.

In the same manner, the idea of the Incarnation itself and gift of hope through Jesus Christ was something of a scandal in the ancient world, especially in the manner of his coming; St Athanasius reminds us that, “The Lord did not come to make a display. He came to heal and to teach suffering men.” In this we see that hope came in Christ in the humblest of manners. During this time of advent this message becomes even more prevalent, and we are taught of the nativity of our Lord being born not in a Palace as a King but in a manger where animals feed from.

St john Chrysostom expresses this in an emphatic manner in his nativity Sermon, stating, “What shall I say! And how shall I describe this Birth to you? For this wonder fills me with astonishment. The Ancient of Days has become an infant. He Who sits upon the sublime and heavenly Throne, now lies in a manger.” In this we see the scandal of hope coming through the meekest of means.

This theme is again taken up by Tolkien, through his main protagonist who is a Hobbit (Halfling) named Frodo. As all of the races are arguing over who will destroy the ring he volunteers to take up the quest and he expresses his meekness by stating, “’I will take the Ring,’ he said, ‘though I do not know the way.’ In this we see the reminder of the smallest of beings doing what none other could. This message again is emphasised when it is stated, “such is oft the course of deeds that move the wheels of the world: small hands do them because they must, while the eyes of the great are elsewhere.”

This resonates with the message of the Incarnation, that the lofty and prideful will not seek Salvation in what they perceive as lesser, an attitude which we see throughout the Gospels through the Jewish authorities refusing to accept Christ due to their pride and greed.

This message again is a vital and important practical message for Christians, since God has condescended and became man for us, offering up himself as man that we may come to know him and receive Salvation. St Paul expresses this, stating how he, “did not regard equality with God a thing to be grasped, but emptied Himself, taking the form of a bond-servant, and being made in the likeness of men.” This can again link to the message of the Resurrection that he died to defeat death, in the same way he came to us to help us come to him. In living out this in our lives we are given a living example of how to live meekly and in humility. Even beyond this we are offered a promise of Salvation, reminded that the meekest and lowest of us can be the bearer of hope to others.

Overall, we are offered two key images of hope, neither of which would traditionally inspire in us the idea of a promise of Salvation or Hope. However, we know that it was through the birth of the Child in the Manger and his harrowing Death on the Cross that hope was returned to us with the promise of Salvation.  At this Advent time this is a stunning image and one which is at the centre of our prayers.

To quote Tolkien one more time, “This is the hour of the Shire-folk, when they arise from their quiet fields to shake the towers and counsels of the Great. Who of all the Wise could have foreseen it? Or, if they are wise, why should they expect to know it, until the hour has struck?” Or to put it simply, Hope is found in the most surprising of places but it is always hidden in plain sight.

Tolkien, Meekness and the Christian Message of Hope.