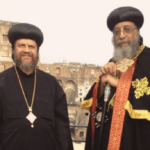 On the night of January 6, 2021 millions of Copts worldwide celebrated the Nativity liturgy just as they had done for centuries. However, this year, for a few of them, some observed the same event on the eve of December 25. The first of its kind Coptic Orthodox event has created a controversy in the Coptic Orthodox Church.

Historically, Pope Kyrillos VI (1959-1971) allowed the Canadian diaspora led by Rev. Marcos Marcos to celebrate Christmas on 25 December on the condition they keep the Advent Fast 43 days before 25 December. Pope Shenouda III (1971-2012) reversed it back as of January 1973. [Described by Dr. Saad Michael Saad, with guest Dr. Esmat Gabriel and Dr. Nabil Soliman in his LogosTV | Coptic Civilization episode A031 aired on 5 Jan 2016. ]

The story was revisited during H. H. Pope Tawadros II pastoral visit to churches in Canada. Pope Tawadros suggested the Coptic Orthodox Church would change Christmas’s date to align with the vast majority of Christians celebrating on December 25.

The epic continued with a private letter addressed from Anba Serapion, the Coptic Orthodox Metropolitan of Los Angeles and Southern California, to all priests in his diocese. The letter permitted the parish churches, on condition that there is a pastoral need, to have an extra celebration of the Feast on the evening of December 24, and celebrating the Nativity Feast rite on the morning of December 25 without breaking the Advent fast.

Coptic Facebook groups under names such as Defenders of the Faith, the Orthodox Rock, Sons of Pope Shenouda, and tens of others were established, often by the same people attempts to revoke the initiative. The Coptic Orthodox faith was under threat, and the culprit was more significant than what date to celebrate Lord Jesus’s birth.

The merit is not that of a Christmas date or necessary adjustments for pastoral needs, but rather a separation of the daughter from the mother. Years from now, we may look back at this decision as to the first step in a painful schism that separates the Coptic Orthodox Church in Egypt from its churches in the Western world.

The discrepancy in dates has for long irked Copts in the Diaspora, who live in communities where Christmas is on December 25. According to their Mother Coptic Orthodox Church’s ritual, it is not Christmas for Western Copts, whereas January 7 is a typical working day that leaves not much space or energy for celebration. They have long demanded the Coptic Orthodox Church do something about their predicament year in year out.

Pope Tawadros took up the undivided issue in his sermon during his weekly prayer meeting. The Pope started by pointing out that, since Anba Serapion’s message became public, it has been criticized on social media by persons who may or not be affected by the Metropolitan’s decision in any way; highlighting the dispute as frequently breaking all barriers of respect.

The matter at hand, the Pope explained, was about celebrating Coptic Orthodox Christmas invariably on 29 Kiahk but, owing to Western pastoral needs and concerns, the extra celebration is allowed on December 25 without ever breaking the Advent fast.

It was not, the Pope of Alexandria insisted, a change of the date the Coptic Orthodox Church celebrates the Nativity of Jesus Christ.

The Coptic Orthodox Church, Pope Tawadros II said, has over the ages practiced versatility to answer pastoral needs. As for centuries, Mass used to be on Sunday. In current years, however, Sunday halted to be a holiday, Friday became the national weekend day-off, but, at the same time, more few sectors of the Coptic congregation had their own weekly holiday on separate days. So the Coptic Orthodox Church began to celebrate Mass every single weekday, not only on Sunday.

The Sunday School classes and various services and meetings are now also held on Friday, the national weekend for most of the Coptic congregation in Egypt and the Middle East.

Also, the Holy matrimony service was originally part of Matins during Mass in the morning, the Pope said. Still, the Church moved it to the evening to answer the needs of the Coptic congregation.

Pope Tawadros append, Coptic Orthodox Mass, including seasonal prayers for the River Nile, the plants, and the winds. All these originated out the needs of Egypt’s agricultural land, that dependent on the Nile. But many Copts in other countries might need to pray for other rivers or even rain.

Different congregations have different pastoral needs, the Pope said, and the Coptic Orthodox Church must answer them.

Pope Twadros II affirmed that every religious arrangement between the bishop and the priests to be profoundly discussed by the Holy Synod of the Coptic Orthodox Church; furthermore, all decisions to be exerted in consultation with the Pope.

The Bible says the Sabbath was made for man and not man for the Sabbath. Pope Tawadros reminded. Likewise, the Church’s established liturgical services for man, not the contrary.

The Pope asked those who rebuked Anba Serapion’s decision, claiming to be speaking on behalf of the Copts in general—one blogger posted: “We are and the entire Coptic people”—to ask themselves who authorized them to represent the Copts? He finally asked them to pay attention to their salvation and lives.

“I wanted to share all of this with you in order that there would be no offense found among the Church,” he concluded.

Delivered to you by COPTICNN™ | Coptic News Network on 2021-01-07 from Los Angeles, United States


Nader Hanna is an Egyptian-born Canadian newspaper publisher and media entrepreneur since 1988. He is the founder and CEO of Coptic News Network Association—often called COPTICNN, a global Coptic media conglomerate. The digital Coptic Orthodox Christian newspaper has always done its job well, but, just as importantly, it was the mothership for so many other projects.