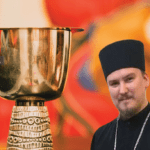 Cana 2021! This Beginning Of Signs Jesus Did In Galilee

“Woman, what does your concern have to do with Me? My hour has not yet come.” Jesus said at Cana Of Galilee.

Today the Church celebrate its yearly remembrance of the miracle of the changing of water to wine at Cana. This miracle is a wonderfully enigmatic event, with Christ along with his mother and disciples attending a simple event and using this to demonstrate his power, leading to greater faith amongst the disciples.

However, in their works the Fathers note often that this miracle and the host of those in attendance give it a greater depth than we often give the event credit for, revealing Christ not just in his power to change water to wine, but giving us a greater understanding of the purpose of Christ and his mission on earth.

A first example of this comes with the impending disaster of no wine at the wedding, for the guests had drank it all. Seeing this, St Mary speaks to her son to tell him that there is no wine, to which he responds in a way which has startled many readers of the Gospel. He says to her, “Woman, what does your concern have to do with Me? My hour has not yet come.” To many, these words can seem abrupt and somewhat harsh. However, this in fact contains one of St John’s great Christological revelations in a line repeated multiple times in his Gospel; “My hour has not yet come.”

St John Chrysostom speaks at length about this enigmatic line in his commentary on the events of the wedding at Cana, noting that Christ states this a number of times throughout the Gospel, when people are reaching to touch him or calling him to some form of action.

The use of this line at the wedding is significant in showing that it was not yet time for Christ to manifest himself to the multitudes and thus he was not to reveal the extent of his power to all those present, including many of the Disciples as St John reveals later in his Gospel when he states, “For neither did His brethren believe in Him.” (John 7:5) Instead Christ uses this miracle to reveal his authority to those closest instead of becoming a doer of miracles in the eyes of all present, which St Cyril of Alexandria sees as his way of demonstrating the love of God through granting,” the grace to the necessity rather than to the lookers on.”

In this way, Christ’s words reveal to the reader his authority and that of his will over all else, as opposed to it being reactive to those around.

Similarly, Christ’s dual response to this request also requires some discussion, since he both spoke bluntly to his mother and called for obedience to her and a granting of her request. Having discussed the former with regards to his purpose and mission, we can look on to the latter and ask why Christ then went on to do this miracle. Going back to the words of St Cyril, he sees this as Christ demonstrating that, “the deepest honor is due to parents, admitting out of reverence to His Mother what He willed not as yet to do,” therefore granting such a request out of his own will despite it not being wis willed time for the revelation of his authority.

However, St John Chrysostom speaks of this response in a different manner, seeing the response as a sign of humility. He links this to the events which occurred directly after. John’s Gospel tells us that after his statement regarding the request his mother called over servants to him and told them, “Whatever He says to you, do it.” (John 2:5). This interests St John Chrysostom in his commentary greatly, as it implies that Christ’s doing of the miracle following the response was twofold, expressing that he, “ might not seem entirely to contradict and shame her that bare Him” and also, “that He might not be thought to want power, for she brought the servants to Him.”

In doing this, he would demonstrate his authority over the nature of the waters but without commanding authority of those around. St John Chrysostom links this to example of Christ healing the Caananite woman’s daughter, where he demonstrates authority without claiming power over those who request his aid.</p

A last point we can draw from this is the miraculous occurrence itself and its revelation as to the power of Christ and nature of his earthly ministry. John notes this two times in the narrative, firstly through the master of the feast who says, “You have kept the good wine until now!” (John 2:10) in glorification of this event, and also in the final verse of the event, stating how in this Christ, “manifested His glory; and His disciples believed in Him.” Interestingly St John Chrysostom’s emphasis for this is not the impact of the miracle itself but the revelation of the nature of the mission.

He notes that the master of the feast compliments the wine but has no knowledge of what has occurred, putting this down to the fact that, “He did not reveal it to all, but to him who was best able to understand what was done. In this, Christ’s mission and the timing and manner by which he would reveal his miracles is shown to be planned as per his will. In this we learn that the mission of Christ is again not reactive but comes about as per the will of God alone.

It brings a demonstration of the power and nature of Christ, the obedience of creation to his will, affirms the respect of marriage parenthood, and brought those close to Christ to knowledge of his power. Deacon Daniel Malyon | Cana Of Galilee

In his discussion of the event, St Cyril takes a different approach to its meaning. He sees it as having sent a fourfold message that, “honorable marriage was sanctified, the curse on women put away and the glory of our Savior shone forth as the sun’s rays, and more than this, the disciples are confirmed in faith by the miracle.” In this single event Christ affirmed the Sacrament of Marriage, proclaimed the holiness of his mother, demonstrated his authority over nature itself, and brought the disciples to a greater faith.

Overall, the miracle of the turning of water to wine in the wedding at Cana is the first of the miracles in the earthly ministry of Christ and one which speaks more in ten verses than one can imagine. It brings a demonstration of the power and nature of Christ, the obedience of creation to his will, affirms the respect of marriage parenthood, and brought those close to Christ to knowledge of his power. How wonderful an event can there be than one which brings all nature together in the glory of God.

This Beginning Of Signs Jesus Did In Cana Of Galilee.