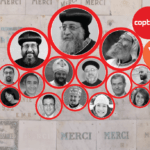 “I am thrilled we have been able to maintain our fantastic editorial and marketing teams for both Coptic News Network, Copts Time Magazine, and Business Directory, which are now digital properties integrated into copticnn.com.” Publisher Nader Hanna stated marking the 180 Days Milestone.

I have been lucky. Lucky to have landed on this earth through a string of almost comical misadventures in the mid of 1971. I was blessed to be born at the right time. There’s a book written somewhere about boomers and their exceeding luck. Even luckier to be baptized Copt at the blessed hand of Father Bishoy Kamel.

Lucky again, when the priests and church board put up a few Egyptian pounds to help us do what not many had so far done in Christian media: publish. Publishing was far from easy in Egypt at that time. But against all odds, we published “Agnahat El-Kadassa.” Two of those fellows, Sherif and Bahgat, are no longer with us and dearly missed.

It’s impossible to overstate the impact of the Church of Alexandria on my life. Although I left Egypt at a young age, their memory and teaching were deeply rooted.

I immigrated to New York, which is an entrepreneurial and publishing city. My affinity for both allowed me to feel at home and run a newspaper that included news and business points of view. I registered the domain st-takla.org trying to publish in Arabic. It wasn’t done often as the web was unknown to many in those days (1988-1992). I failed. Lucky enough, a young Christian, Michael Ghaly, picked it up afterward and got it done (about 1997).

I started assisting printed Arabic Newspapers in New York, then migrated to Digital Publishing using Quark Express, “The Voice Of Peace,” and “Alwaa-El-Araby.” I bought my first Mac in 1995. It was a Power Macintosh 8100/80AV, and it was a Big Deal. It made all sorts of digital publishing possible.

At university, I became the co-chair of a community group called “Glory Digital Media Group” which motivated me to publish the first Online Arabic Business Directory and Coptic Business Directory. I tried to sell the idea to a Coptic Church, but no dice. However, a Mosque in New York hired me to design a printed version of the directory. The plans fell through, as there were not enough ad buyers or business data.

In 1998, we launched a Coptic online newspaper with a Church Listing (a.k.a. directory). It was groundbreaking. I’ll never forget it. Many churches were fearful about publicity, about sharing information, even just the names and places of worship. Some were also resistant to new technology, on general principle. But they considered and debated and emerged from that fear to become proud pioneers of Coptic publishing. The bonds of those people involved remain tight to this day.

The most critical new project the newspaper incubated was copticonlinebusinessdirectory.com (COBD), which has taken its place as one of the first successful Coptic digital news websites.

The early 2000s saw the advent of online and digital publishing. Many other projects emerged. Coptic leaders in technology, web, and databases proudly launched their internet-related project. And much Coptic success stories were marked during the dot-com era.

Yet, the dot-com bubble collapsed. It took down with it our project. That was not the only blow we faced. In 2003, I moved to Canada, and between the two countries, the transportation company managed to lose the server, computers, and all data drives. There was nothing left, and authorities failed to explain.

Yet, with a faithful servant of the church of Canada, Iris Alberich, and with Father Angelos Saad’s blessing, we registered the domain “cccnet.ca.” We also launched the first Coptic School website, “pccnet.ca.” I remember working day and night with Eng. Mickael Elgabalawi and Father Maximus Riskalla, and many others gathered to build the school’s first tech-lab and networking for the classroom, giving children access to online learning, training, and testing.

Over the years, through all the difficulties, the love of publishing had kept me going. I started many Online Coptic Newspapers, Christian directories, and other newsletter projects under different domain names.

In the end, the tail (the directory) started to wag the dog (the news site). Our hearts were never far from COPTS TIME Magazine and the growing need for covering the lifestyle and growing sophistication of Coptic communities worldwide. We registered copticnn.com.

The idea was to connect Copts worldwide with a publication that celebrated their faith, hard work, culture and highlighted issues of importance to their community.

The incredible talent that COPTICNN.com attracted filled the pipeline with creative people. We lived in a hothouse managing these disparate platforms, and it was fun and not infrequently very chaotic.

Many different lenses and celebrations of excellence brought us close to the heartbeat of the Coptic community. Our communities’ power was in full view when we gathered to celebrate the best among us at our various milestones. They were never dull and almost always inspiring. It was confirmation of a unique culture tempered in fire.

The civility, innovation, and courage of our audience, who gathered from all over the world, is fantastic.

I profoundly believe its power comes from the constant danger and frequent reality of many setbacks. You can’t live at the price of a few nickels without humility and preparedness. And you don’t learn how to innovate in the media business unless you have spent a fair amount of time underground.

In this newspaper’s life, the Copts worldwide have evolved from a few immigrant camps to a world-class cluster that exports innovation around the planet. It is a community-state that has miraculously survived the suppression of tens of thousands of Copts over many centuries.

What I like most about COPTICNN is that it is like an open city. We share a spectacular environment with beautiful stories and fresh content readily available to everyone. It shouldn’t be taken for granted. The disruption of news publishing (from print to digital) is just plain painful. It has been forecast for a long time. We all have scrambled to be ready, and of course, we are. The copticnn.com site is the best in its class.

I am thrilled we have been able to maintain our fantastic editorial and marketing teams for both Coptic News Network, Copts Time Magazine, and Business Directory, which are now digital properties integrated into copticnn.com. Our website delivers news as any global newspaper and is freely available every hour, not once a week. So the new website is better for our audience today than ever.

“We’re thrilled to have achieved two landmark milestones during what was inevitably a problematic year. First, we logged more than 200,000 user sessions and second over 60,000 Engagement across social media platforms,” says Nader Hanna | Publisher And CEO.

We have had many extraordinary leaders in our association. I am profoundly indebted to our leaders and our fantastic writers, marketers, designers, salespeople, and most importantly, our readers’ feedback. We worked together as a team. We began to write and sell advertising to survive; we began to market to be persuasive and design to have impact. We began to take risks to grow and employ tweets and pins to get our words into our readers’ screen.

We have persisted and progressed for nearly thirty-three years, and now our award-winning website (copticnn.com) has joined a fantastic young Coptic News Network Association to carry on our mission.

Today, we cannot underestimate the short-term nor long-term disruption of COVID-19. It will not be easy, and I wish our team safe living in this challenging time. You are all well prepared and battle-ready. It is in your DNA. Congratulations to All.

Delivered to you by COPTICNN™ | Coptic News Network on 2021-02-02 from Vancouver, Canada

Nader Hanna is an Egyptian-born Canadian newspaper publisher and media entrepreneur since 1988. He is the founder and CEO of Coptic News Network Association—often called COPTICNN, a global Coptic media conglomerate. The digital Coptic Orthodox Christian newspaper has always done its job well, but, just as importantly, it was the mothership for so many other projects.