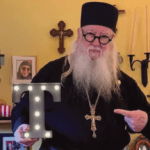 Holy Tradition | Not A Small “t”

Holy Tradition is not apart from the Bible, but supports the proper interpretation of the Bible. Holy Tradition emanates from Christ Himself | Abbot Tryphon

The Church’s Holy Tradition is based on the traditions and teachings of the Early Church, not the small “t” traditions followed by today’s protestants. As a former Evangelical myself, I ultimately joined the Orthodox Church because I started noticing the “traditions” that were separating Evangelicals from one another, both doctrinally and in the numerous ways they worshipped, were based on traditions of man.

“Many have undertaken to draw up an account of the things that have been fulfilled among us, just as they were handed down to us by those who from the first were eyewitnesses and servants of the word. With this in mind, since I myself have carefully investigated everything from the beginning, I too decided to write an orderly account for you, most excellent Theophilus, so that you may know the certainty of the things you have been taught (Luke 1:1-4).” It must be noted that in this instance, the oral word preceded the written word. hence becoming Holy Tradition.

In John 20:30-3, it is revealed, “Jesus performed many other signs in the presence of his disciples, which are not recorded in this book”, and in John 21:25, we read, “Jesus did many other things as well. If every one of them were written down, I suppose that even the whole world would not have room for the books that would be written”. One of my personal favorite passages regarding Holy Tradition is found in 2 Thessalonians 2:15, “So then, brothers and sisters, stand firm and hold fast to the teachings we passed on to you, whether by word of mouth or by letter.”

Holy Tradition is not apart from the Bible, but supports the proper interpretation of the Bible. Holy Tradition emanates from Christ Himself, and is expressed by the Apostles, the Holy Fathers, and the Church. The Fathers, in fact, are the very guardians of the Apostolic Tradition, for they, like the Apostles before them, are witnesses of a single Truth, which is the Truth of the God-man, Jesus Christ. Since Christ is one, unique, and indivisible, so also is the Church unique and indivisible. The Church is the incarnation of the incarnated God-man, Jesus Christ, and will continue through the ages, and even throughout all eternity.

With love in Christ,
Abbot Tryphon

About The Brotherhood of the All-Merciful Saviour Monastery

The Brotherhood of the All-Merciful Saviour was established in 1986 by Archimandrite Dimitry (Egoroff) of blessed memory. The Monastery is under the omophore of His Eminence Kyrill, Archbishop of San Francisco and Western America, of the Russian Orthodox Church Outside of Russia. The Monastery is located on scenic Vashon Island in the central Puget Sound, near Seattle, Washington.

Donations toward the support of the monastery, are gratefully received. You may do so by using your credit card, or by mailing a contribution directly to the monastery. [Paypal Donation Page]

Delivered to you by COPTICNN™ | Coptic News Network on 2020-02-08 from Washington, United States

Holy Tradition | Not A Small “t”

Abbot Tryphon of the All-Merciful Saviour Orthodox Monastery on Vashon Island in Washington State. The Monastery belong to the Russian Orthodox Church Outside of Russia which is known as ROCOR and today is an Independent Entity of the Orthodox Patriarchate of Moscow.