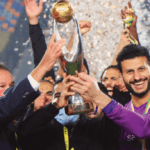 “I congratulate Ahly football team for winning third place in the FIFA Club World Cup and [for their] honourable performance,” El-Sisi said in a tweet.

Al Ahly’s Board of Directors expresses sincere thanks and gratitude to the President. It affirms the full appreciation for the excellent support for the Egyptian sports under the directives and patronage of President El-Sisi, which were and will remain the primary motivation for raising Egypt’s flag high in international events.

African champions Al Ahly SC headed into the FIFA Club World Cup Qatar 2020™ with experience as one of their significant assets. The top Egyptian club were all set for their sixth appearance in the competition, equaling their best result: third place in 2006, on the second of those appearances.

There was no extra-time at the end of the game, meaning the match went straight to penalties.

“From the start of the tournament, we all promised that every player will give his maximum effort in order to achieve a good position,” El Shenawy said after the game. “Thankfully all our efforts paid off and we managed to win the bronze medal.”

Al-Ahly’s President Mahmoud El-Khatib was the head of Al-Ahly’s delegation that traveled to Qatar to participate in the FIFA Club World Cup, played between 4 and 11 February.

The prize money for this year’s FIFA Club World Cup has not officially been revealed. However, past editions are probably a good indication of the amounts that will be awarded. In the last few editions the winner received $5 million, the runner-up $4 million, third place $2.5 million and fourth place $2 million.

El Shenawy also spoke about his next dream of returning to participate in the next 2022 FIFA World Cup Qatar™ in less than two years, held for the first time in a Middle East country. “Things are going well. The Qatari stadiums are realy great. I’m very optimistic about being here with the Egyptian national team for Qatar 2022.”

Al Ahly goalkeeper, Ali Lotfy, stated that the team’s goalkeepers prepared well for the FIFA Club World Cup third-place playoff against Palmeiras of Brazil, adding that the team’s goalkeeping coach, Michel Iannacone made them ready for all match scenarios. “We prepared a note that detailed where Palmeiras players preferred to put their penalties. This information helped Mohamed El Shenawy make many crucial penalty kick saves and lead the team to a historic achievement.“

Al Ahly, who performed creditably in their semi-final against Germany’s Bayern Munich to earn widespread praise, enjoyed tremendous support from the stands, thanks to Egypt’s sizeable expatriate community in Qatar.

Al Ahly striker Walter Bwalya capitalized on a loose ball at the half-hour mark before finding El Shahat, who drilled it past Al Duhail goalkeeper Salah Zakaria into the bottom left corner.

Al-Ahly Club broke more records after claiming the bronze medal as it is the first time for the Red Devils to overcome the Copa Libertadores winners. They are the African team that has achieved the most victories in the FIFA Club World Cup with five wins in total.

FC Bayern München claimed their sixth trophy in a year, a feat only achieved once before, by Barcelona in the 2008/09 season. It was also Bayern’s second FIFA Club World Cup™ triumph following their maiden title in 2013.

Tigres never gave up to their credit, and Andre-Pierre Gignac, meters out, was inches away from connecting with a Javier Aquino flick-on in the final stages. Still, Bayern was wholly deserving of their victory.

Tigres owed their Club World Cup debut to a maiden Concacaf Champions League triumph in 2020. It can be justifiably proud of becoming the first Mexican and Concacaf team to reach the final after impressive wins against the respective Asian and South American champions Ulsan Hyundai and Palmeiras.

As for Palmeiras, they fell short of their lofty expectations for the tournament. Widely tipped to contest the final against Bayern, they lost to a strong Tigres side with an unyielding defense. Nor could they find any consolation in their playoff against the Red Devils, failing again and having to settle for fourth place.

For their part, Al Duhail tried valiantly and put in a strong second-half display against Al Ahly, but the Egyptians blocked their path to the last four.

Their second fixture avoided the same mistakes and scored three goals against Ulsan, finishing fifth in their first tournament.

The Korean club was not up to their fans’ expectations and lacked firepower without their star striker Junior Negrao, who left the club shortly before the tournament. Despite being used to Qatar’s stadiums, where they played the latter stages of the 2020 Champions League, they could not replicate the movement and finishing that made them continental champions.

Al-Ahly games carry the highest average fan attendance in Africa and the Middle East. This means that more people come out to support The Red Devils than any other team in Africa. Al-Ahly also tops the list with over 100 million supporters around the world.

COPTICNN.com congrats Al-Ahly Club and their fans worldwide for a well earned wins. All your hard work, commitment and practice has paid off. You’re a superstar! May today’s success be the beginning of tomorrow’s achievements.