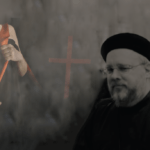 Good News or Not? The Godly Views [P2]

“But the love of God would not allow man to be lost forever without a divine effort to restore mankind. Therefore even from the beginning God willed that he himself, in the divine person of the Word of God, would become man himself, and as true man, without ceasing to be God, would live that life of obedience which God had required of Adam.” Good News or Not? | The Godly Views.

In the previous part, we took a look at three wrong views. In this part, we will continue to take a more in-depth look at What is this Good News? God’s response to the sin of Adam and Eve and dwell on the life which the authentic Orthodox Gospel invites us to embrace.

What was God’s response to the sin of Adam and Eve? It was not one of hatred and anger. In love the Holy Trinity determined that a way would be made for mankind to be restored to the relationship which God had intended. God could not bear that those he had created in love and for love should be lost forever. In love man was forced to endure his mortality, because in mercy God did not wish mankind to endure an eternity of separation from his life and love.

And in mercy the outcome which had Adam and Eve had been warned of was mitigated, so that the soul remained in immortality as the gift of God, and would always draw mankind to a remembrance of that which had been lost, for his salvation.

The righteousness of God could not simply forgive Adam and Eve, since what had taken place was a fundamental change in relationship, and the choice of non-being, of death rather than life, had consequences. But the love of God would not allow man to be lost forever without a divine effort to restore mankind. Therefore even from the beginning God willed that he himself, in the divine person of the Word of God, would become man himself, and as true man, without ceasing to be God, would live that life of obedience which God had required of Adam.

More than that he determined that as man he would take up again that contest with the enemy, with Satan the deceiver, and would overcome him by the steadfast and unfailing turning of his own human will towards the will of God. Death, as the separation of man from God, would be overcome by God experiencing death, and as man destroying death in his divine power.

Through the long years of the Old Testament, in the times of the patriarchs and prophets, we find a record of mankind both losing contact with God, and slowly being prepared for the entry of God into the world. At one extreme there was the worst excesses of demon worship, leading even to the sacrifice of children. This truly brought the wrath of God upon those who perpetrated such evil against the most vulnerable.

But at the other extreme we find a growing awareness of God as an Holy Trinity of love, and finally the birth and life of the Virgin Mary, the Theotokos, the best that mankind could present to God, a soul committed to the service of God in humble obedience from her infancy. She was one in whom God was well pleased. But even in her virtue she was separated from God according to that which he had desired, an interior spiritual union.

In her self-sacrifice, her words – Let it be unto me according to your word –  the Good News was made manifest in the world. For the Father chose you, and the Holy Spirit overshadowed you, and the Son condescended and took flesh from you as we pray in the prayers of our Orthodox tradition every day. The Son took flesh from the Virgin Mary and became man, not entering into a man who already existed, nor having only the appearance of being a man, nor moving and animating a lifeless body.

But the Word of God himself, was conceived of the Virgin Mary, the Theotokos, by the Holy Spirit and became that unborn child, that baby born in Bethlehem, that youth in the Temple at Jerusalem, that teacher and miracle worker, Jesus Christ, the Messiah and Saviour of the world. But he did not become man by ceasing to be God, nor did he become man by changing his humanity into something else.

While remaining the Word of God, perfect in his divinity and upholding the whole universe, he also became man, a baby wrapped in swaddling cloths, an adult beaten and crucified and laid dead in a tomb, and the risen Saviour restoring humanity to a right relationship with God.

Why was it that God came into his creation? He tells us himself. For God so loved the world… And all that he did during his time on earth was in the same love that sent him to earth. His whole life on earth was a restoration of that which Adam had ruined. He fasted for 40 days in obedience just as Adam had been unable to resist eating the fruit of the Tree of the Knowledge of Good and Evil.

He received the gift of the Holy Spirit, his own divine Spirit, as man, when he was baptised on our behalf, and standing in the waters he heard the voice of the Father speaking to all mankind when in a right relationship with him, this is my beloved.

In the several years of his ministry he revealed to us the heart of God by his teaching and by his loving care, shown to all and especially the most vulnerable and marginalised. Then on the cross, sinless on behalf of us sinners, it was not the wrath and hatred of the Father which he bore, but he freely embraced the sentence of death which had been given to Adam as the consequence of his sin. As man he entered into death, but as God and sinless death had no power over him at all.

He rose to life because he is life itself. And having died the death that we deserve because of sin, death and the sentence of God against Adam had no more power over him.

What does this mean for us all? Death has no more dominion over us because Christ has taken away the sentence of death in his own body on the cross. He has become a Second Adam, a new start for humanity. United with him we may also receive the gift of the Holy Spirit, the divine life restored to mankind in Christ, and we may enter into an experience of the life of eternity now, as we seek and participate in a living unity with God by the indwelling Holy Spirit.

Is this not Good News? We need not experience the living death of separation from God, nor fear our own mortality, since the resurrection of Christ is the guarantee of our own life in eternity. We can experience life with God now. This is the meaning and substance of the Christian life. We are not trying to do enough to get to Heaven in the future if we are lucky. We are called to experience Heaven on Earth, and by that experience to find peace and joy in every circumstance.

If we are hoping to get to Heaven by various means then we have not understood the Christian message. Heaven is a prayer away, for those who are united with God in this life. God has become man, truly man, without ceasing to be God, that we might share in the divine light and life, without ceasing to be human, but by glorification and transfiguration. Who would give their life for an angry and hate-filled God, or a God with whom we must bargain, or a God who needs to give us what we want if he is to expect our attention.

But it is worth giving all that we have of ourselves to a God who has made it possible for us to become all that he created and desires us to be.

The fulfillment and satisfaction of all human life is found in such a relationship with such a God. And it is a relationship of love with a God who is love. Have you believed otherwise? Then you have been taught a terrible and harmful error. Such a relationship does not take away all of our problems and difficulties in this life, but entering into a unity with God by the indwelling Holy Spirit bears the fruit of the Spirit, transforming our experience of these trials with love, peace, joy, patience, long-suffering and every other blessed spiritual consequence.

This is the Good News to which I have committed my life, no less filled with pain and difficulty than others. And the growing participation in the divine life of the Holy Spirit is already an experience of the life of eternity. This is the God and this is the life which the authentic Orthodox Gospel invites us to embrace.

Delivered to you by COPTICNN™ | Coptic News Network on 2020-03-04 from Liverpool, England

Good News or Not? The Godly Views [Part 2]

0 0 0
Previous : The 2021 Holy Synod Of The Coptic Orthodox Church
Next : The Saints
Fr. Peter Farrington