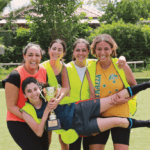 The eagerly anticipated tournament was the first event at the parish since the corresponding competition in January 2020, just two months before the COVID-19-enforced lockdown in Sydney.

Over 120 youth entered the competition, forming 16 sides, including a record six teams in the women’s draw.

The women’s tournament kicked off at 12.30pm with the opening match between two-time runners up It’s About To Get Messi and We Still Need A Team Name finishing in a 0-0 draw.

Last year’s champions When in Doubt, Kick it Out entered the 2021 tournament under a new name, Labat FC. They started their quest for back-to-back titles by securing a 1-0 victory over St George Girls courtesy of last year’s Player of the Tournament, Christine Zabakly.

A late equaliser ensured It’s About To Get Messi claimed a 1-1 draw against The Uncoordinated in the next round of fixtures. Candy Guirguis later ensured her team, aptly named after Barcelona’s Argentine magician, lived up to the hype the name suggests.

The teenager kept calm after finding herself one on one with the St George Girls goalkeeper and slotted home a neat finish to secure a 1-1 draw with a last-second equaliser.

The top two teams progressed straight through to the final, meaning unbeaten sides Labat FC and We Still Need A Team Name faced off in a repeat of the Round 1 stalemate.

It was a case of same team, different day though, as Labat FC defended their title, etching their name on the cup as undisputed women’s champions. Christine Zabakly once again took out the Player of the Tournament, with her deflected goal sealing the 1-0 championship victory.

The men’s tournament kicked off at 3pm with a Group A match between 2020 champions St Demiana and Coptic United. The defending champions felt the absence of several members of their title winning squad, coming up short in a 2-1 defeat.

St Demiana bounced back in the next round, thrashing last-minute entrants St Anthony 6-0, while Coptic United continued their strong start by dispatching bottom of the table side B Dock Boiz 5-0.

A 4-0 win over B Dock Boiz in Round 3 ensured St Anthony – led upfront by Mina Awad and Philo Mikhail – claimed their sole victory of the tournament.

Following a year on the sidelines St George Church returned as the much-fancied Fam FC to shake up the competition. After successive 3-0 victories against their first two opponents, the men in blue made a statement with a 7-0 demolishing of B Dock Boiz in the highest score of the day. The result set up a crunch final Group A fixture with fellow unbeaten side Coptic United.

Billed as the match of the tournament amongst some 200 spectators, it ultimately ended in an entertaining 0-0 draw. That meant Fam FC qualified for the semi-finals top of the table on goal difference, as both sides netted a staggering 24 goals between them across eight matches.

Group B got off to a flyer with Daddy Chill sending out a statement of their own with an easy 6-0 thumping of the unfortunately named Not That Good in the opening match.

Round 2 saw a clash between two of the more creatively named teams, Al Far3ana and GEBTAK, as both entertained the crowd in a back-and-forth match where Al Far3ana overcame their opponents 2-1.

Tamam United, another team paying homage to its Egyptian heritage, kept a clean sheet in a commanding 5-0 win over eventual wooden spooners Not That Good.

Next up they faced much sterner opposition, as a rested Daddy Chill looked to get one over their closest rivals after a bye in the previous round. However, a 1-1 draw meant both teams needed to secure victories in their remaining group fixtures to qualify for the semi-finals.

Daddy Chill got back on track, defeating GEBTAK 3-1, while after a Round 4 bye Tamam United secured a 4-1 win over the same opposition to overtake Daddy Chill and top the group.

Not to be outdone, Al Far3ana continued the free-scoring trend of the men’s tournament with a comprehensive 6-0 triumph over Not That Good. The result meant they too needed a win in their final group match, against Daddy Chill, to progress.

Played under the lights, the winner-takes-all battle was a heated exchange, as tempers flared on both sides with it all on the line. Al Far3ana’s star man Mina Mina was involved in an on-field incident which saw his jersey torn down the side. Unfortunately for the men in white, a goalless draw meant their tournament ended early.

Words continued to be said after the final whistle, though the fans saw the funny side as the referee attempted to calm the situation – many were yelling out the popular ‘Daddy Chill’ meme to much laughter.

The first semi-final between Tamam United and Coptic United began in rapid fashion, with the latter 2-0 down inside the opening minutes, including letting in a goal off the kick-off. Tamam United capitalised on their fast start, winning a penalty soon after, which was dully converted to send them into a maiden Australia Day Cup final.

If the fans were stunned by the first semi-final result, they needed to keep an even closer eye on the action in the second.

An early lead for Daddy Chill meant Fam FC conceded their first goal of the day and had many wondering if an upset was on the cards. Parity was restored within seconds though, as John Elias raced into open space and scored an instant equaliser. However, Daddy Chill reclaimed the lead soon after.

In true competitive spirit, two players who put the “fam” in Fam FC combined to level the scores once more. George Hanna sent in a corner for his cousin Abanoub to thump home and draw things level at 2-2.

But, just as the whisper of a possible nail-biting penalty shootout began to spread, Riley Chapple emerged at the death to snatch a 3-2 win for Daddy Chill – cue wild scenes on the sidelines.

The final was a one-sided affair despite Daddy Chill and Tamam United playing out a 1-1 draw earlier in the day.

Darcy Ellem doubled his tournament goal tally, scoring a brace either side of Player of the Tournament Riley Chapple’s ladder-leading tenth goal of the campaign.

However, the match was not without controversy, with Tamam’s Joey Iskander receiving a contentious red card, committing a foul as last man to prevent what the referee deemed a goal-scoring opportunity.

At 3-0 down, Patrick Mankarious did net a consolation goal for the men in black, but Philo Iskander sealed the championship with a fourth in a 4-1 triumph to conclude yet another successful Australia Day Cup.


Bishoy Bassilious is a journalist in Sydney, Australia, currently working with M&C Saatchi – World Services he has also spent time working with Fox Sports News, and SBS – The World Game. He is also an active contributor to Christian Youth Channel as a host, presenter, producer and writer on a number of shows, and is a member of the Australian Egyptian Forum Council – Youth Chapter.

Holidaying whenever he can, if he is not travelling or playing football, he is co-hosting a Premier League podcast called The Crossbar Podcast with fellow journalists.