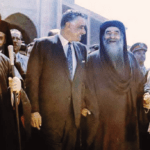 The Pope And the President

“With the help of God, I will work hard to teach my children the knowledge of the Lord, patriotism, and the meaning of true brotherhood, so that the nation becomes a strong unit, having faith in the Lord and love for the homeland.” Pope Kyrillos VI said to President Gamal Abdel Nasser | The Pope And the President

Today, we will be celebrating the Golden Jubilee of the Man of Prayer’s departure, Pope Kyrillos VI, the 116th Pope of Alexandria, who spent 11 years, nine months, and 29 days on the See of Saint Mark. One of the most critical features of the pontificate of Pope Kyrillos VI is the close relationship and the great love full of appreciation and respect that linked His Holiness to President Gamal Abdel Nasser.

They met for the first time in 1959. Both exchanged friendly conversations, where the Pope said to the President: “With the help of God, I will work hard to teach my children the knowledge of the Lord, patriotism, and the meaning of true brotherhood, so that the nation becomes a strong unit, having faith in the Lord and love for the homeland.”

The next time they met was in 1965 when the President asked the Pope to build a new Papal Residence to visit him there; then His Excellency declared the state’s contribution to building the new Cathedral.

On one occasion, President Abdel Nasser’s family wanted to meet with Pope Kyrillos, so he welcomed and met them, praying for God to grant them health and blessings. As the Pope was about to leave, the President congratulated him on the anniversary of his enthronement on the See of Saint Mark.

In 1967, President Gamal Abdel Nasser issued a republican decision forming a board of directors for the endowments of the Patriarchate after the General Congregation Council’s failure. The President also donated ten thousand Egyptian pounds to pay the Patriarchate employees’ salaries who had not received their salaries for months.

The memory of Egyptian history cannot forget Pope Kyrillos’s position when President Abdel Nasser announced that he would step down from the presidency on the evening of June 9, 1967, after the day of the setback. The next morning, while the Pope was praying the Mass as his daily habit, he mentioned Egypt, its President, and its people.

Immediately after the end of the Mass, the Pope headed from the Patriarchate, accompanied by a delegation of Metropolitans and priests, to the Presidential Palace, where Pope Kyrillos met Mr. Mohamed Ahmed, Secretary of President Abdel Nasser. The latter sent a car to open the way for Pope Kyrillos’ car, as the streets were crowded with demonstrations.

Upon his arrival, Pope Kyrillos did not find the President in the Presidential Palace, for he was in his home. He left him a message with Mr. Mohamed Ahmed, in which he said, “Tell him that the Copts hold on to him as President. They need him as a leader and head of the country.” Then, the Pope left after receiving a promise to get his message across.

After the Pope returned to his residence in Azbakeya, he asked the people to prepare to ring the bells, to the attendees’ astonishment. However, their surprise did not last long. As the then Speaker of the National Assembly, Mr. Mohamed Anwar Sadat announced that President Gamal Abdel Nasser had submitted to the people’s will!

On the morning of June 10, 1967, the Pope went to the Presidential Palace and wrote in the guestbook that the Copts were happy and satisfied with the President’s decision and his response to the people’s call to resume his role as President of the country.

“Tell him that the Copts hold on to him as President. They need him as a leader and head of country.” Pope Kyrillos VI said to President Gamal Abdel Nasser | The Pope And the President

History cannot also forget that on June 25, 1968, although the President was suffering from leg pains, he insisted on attending the new Cathedral’s opening ceremony. Similarly, the Pope was keen on contacting the President by phone to check on him during his medical trip to the Soviet Union.

Upon the President’s return, the Pope received him at the airport and embraced him for a long time; then the President said to the Pope: “Why did you not send a representative of your Holiness since you have not fully recovered yet?”

When the President of the Republican died, the Pope did not hesitate to offer his condolences. He was despondent and kept silent for a long time, feeling sorry for losing such an honorable person. On the day of the departure of Pope Kyrillos VI, Voice of America announced, “The loyal friend of Abdel Nasser has passed away.”

Bishop Anba Ermia | The Pope And the President