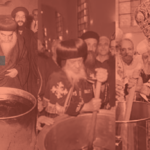 Today, Myron Oil preparation is scheduled for the 10 and 11 March 2021. The Holy Chrism, also known as the Myron Oil, would be prepared for the 40th time in the Church’s history by Pope Tawadross II and the Holy Synod members at the monastery of Anba Bishoy at Wadi al-Natroun in the Western Desert.

“The innovative new method,” the Pope declared, “has the added value of allowing us to produce a greater quantity of Myron Oil since it simplifies the process.” H.H. Pope Tawadros II explained | 40Th At the “Myron Oil” 2021 Preparation.

Today, at the monastery of Anba Bishoi in the Wilderness of Scetis, present-day Wadi Natroun in Egypt Western Desert, witnessed a vast procession of members of the Coptic Orthodox Church’s Holy Synod in their white clerical vestments. They all marched carrying vessels that included the ingredients needed to make the Holy Chrism Oil, knowing as “Myron Oil.”

At the head of the procession was H.H. Pope Tawadros II. The chiming of the bells and praises sung by the priests and deacons joined the march from the well-known ancient monastery church to the modern Anba Bishoi cathedral in the monastery.

The march marked the very inception of the numerous steps required to make a new batch of the Myron oil, the 40th batch in the Coptic Orthodox Church’s history.

Inside the cathedral, near the iconostasis, the crucibles placed on the right would carry the Myron oil. Those set on the left would have the Ghalilaon Oil. At The center is a stand on which an arranged of many bottles of pure olive oil produced by the neighboring al-Baramos Monastery. Once the procession entered the cathedral, the prelates left the vessels carrying the Holy Myron Oil ingredients on a mounting step stand standing on the left of the sanctuary door.

The preparation started with a thanksgiving prayer, then began the first step of cooking the oil, that involved mixing the ingredients with the pure olive oil and stirring continuously.

The crucibles remain in the nave until Midnight Praise then moved into the Holy sanctuary and placed in the niche that faces the centered altar, known as the Bosom of the Father. They remain in place till Easter Monday, Shamm al-Nesssim when the Pope will place the ‘yeast’ into Myron Oil.

The rituals usually extend for more than three hours. Those bishops and priests not involved in the cooking process read parts of the Holy Bible that concerned holy oil: they read chapters from the Acts and the Epistles of St John in the New Testament; also branches from the books of Exodus, Leviticus, Psalms, Proverbs and Isaiah in the Old Testament.

Pope Tawadros II prays: “We ask you, our Master and Lover of Mankind, Our Lord to send The Holy Spirit to this oil and bless it according to your bountiful kindness; and grant it the sublime work that is Yours, the Healer, so that it would be a guard for the souls, bodies and spirits of your Orthodox servants, and a light to their hearts.” And everyone present replied in unison: “Lord, have mercy.”

According to Coptic tradition, all crucibles to be left standing in front of the altar during Khamasseen’s fifty days following Easter. At Pentecost, the Myron Oil will be finally stored in flasks and sent to the various bishoprics.

The Myron Sacrament, known as the Holy Anointment or the Sacrament of Confirmation, is an event that replicates one of the Copts oldest and most revered traditions of the Coptic Church and which accures ever so often in the Coptic Orthodox Church.

The word ‘Myron’ is a Greek word that means ‘ointment’ or ‘fragrant perfume.’ Anointment with Holy Myron grants the seal of the Holy Spirit.

Coptic Tradition has it that the first who made the Myron were the blessed Apostles from the fragrant oils used for the burial of Lord Jesus Christ and the sweet-smelling spices the women had applied to anoint the body of Jesus but discovered He has risen from the dead.

And when St Mark headed to Alexandria, he took some of the Holy Myron prepeared by the first Apostles and used it in the Sacrament of the Chrism. Church tradition was handed on to the successive patriarchs until Pope Athanasius (AD 298 – 373), who decided to remake the Holy Myron in Alexandria. The original oil was, and still to today, used as ‘yeast.’

Throughout the Coptic Orthodox Church’s history, 25 popes made the Myron, some of them more than once.

Among them was Pope Kyrillos VI, patriarch from 1959 to 1971 and has been recently canonized, and Pope Shenouda (patriarch in 1971 – 2012) prepared it seven times during his holiness papacy. The ever growing Coptic Orthodox congregation inside and outside Egypt generates extra demand on the Holy Myron Oil, hence the need for preparing it more frequently and keeping the Church well-stocked on the holy oil.

The ingredients needed comprise 27 special oils and sweet spices mentioned in Exodus and the Psalms. Among them are the oils of cloves, liquid amber, sandalwood, and balsam.

Most of the 27 ingredients are found in Egypt, but others are imported from abroad. The pure olive oil comes from the producer at the Baramous Monastery in the Egyptian Western Desert. And because several of the ingredients are in solid form, they needed to be soaked or ground before mixing and stirring. The mixture of sanitary aromatic oils is then mixed with pure virgin olive oil. Once the aromatic and essential oils are thoroughly extracted to make Myron, combining the holy oil of rejoicing, the Ghalilaon mix with what remains of the original celibate material.”

In 2014, H. H. Pope Tawadros II created quite a stir when he declared the Church would make use of modern industrial technology to simplify the cooking of the Myron. The Pope announced, “We have used before modern technology to attain the utmost degree of purity in the oil preparation, and at the same time to avoid some of the arduous processes necessary for the Holy Myron Oil preparation in past times.

“For the first time, we have bypassed the arduous step of the extracting the 27 aromatic oils. This was a very time-consuming process that involved copious effort, huge 100 litre-crucibles, as well as other equipment.” Pope Tawdross II explained.

“The innovative new method,” the Pope declared, “has the added value of allowing us to produce a greater quantity of Myron Oil since it simplifies the process.”

Myron Oil | How would the Ghalilaon Oil be prepared?

H. H. Pope Tawadros clearly explained that a well-defined calculation showed that the Holy Myron Oil ingredients allowed for the exact preparation of a quantity of Ghalilaon Oil to be around 1 percent of the Myron Oil concentration. “So we prepared that specific portion of Ghalilaon with the same concentration,” he said.

Pope Tawadros prompted us that innovation was never a missing ingredient in the Church. He took part in Making Myron Oil at Anba Bishoi’s with Pope Shenouda III during 1987, 1993, 1995, 2005, and 2008. And “Every time,” Pope Tawadros said, “the technique differed one way or another, whether in the grinding, soaking, mixing, or stirring processes.

Pope Shenouda was keen on avoiding transgressions or troubles and using scientific means to reach the very same results. “Pope Shenouda III used to mix Holy Myron Oil with the assistante of Father Georgious Attallah of St John’s in Covena, California who is a Faculty of Science professor at the Cairo University’s before he was ordained. And it was Fr Attallah who helped us to contact the international companies specialised in the extraction of oils.” Pope Tawdross explained

The sacrament is granted to the baptized directly after baptism, through anointment with 36 crosses. The baptized then becomes a ‘temple of the Holy Spirit.’

Also, the Holy Myron Oil is used to consecrate all new churches, icons, altars, and altar utensils. Traditionally, the Myron Oil is prepared during Lent before Passion Week and complete on Shamm al-Nessim, Easter Monday, which should see the adding of the ‘yeast’ to the oil.

Fair Use Notice:This internet web page contains copyrighted subject material the use of which has not at all times been specifically approved by the use of the copyright owner. We are making such subject material available in our efforts to advance understanding of environmental, political, human rights, monetary, democracy, scientific, and social justice issues, and so forth. We believe this constitutes an ‘honest use’ of this sort of copyrighted subject material as provided for in section 107 of the United States Copyright Law. Under Title 17 U.S.C. Section 107, the material on this internet web page is distributed without receive advantages to those who have expressed a prior pastime in receiving the built-in wisdom for research and educational purposes.
For more information transfer to http://www.law.cornell.edu/uscode/17/107.shtml. If you wish to have to make use of copyrighted subject material from this internet web page for purposes of your own that go beyond ‘honest use’, you’ll have to obtain permission from the copyright owner