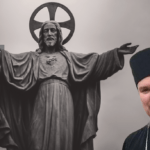 Pride And The Fear Of Reconciliation

“I am no longer worthy to be called your son,” Pride And The Fear Of Reconciliation | By Deacon Daniel Malyon.

This Sunday the Gospel reading focuses on the parable of the prodigal son, a parable depicted often in artwork, iconography, and reproduced in writings from other traditions sue to its vital message of paternal love and repentance. Though the parable depicts the nation of Israel in its given context, it is important to remember that we are all the prodigal son at times, having received the wealth of our father and constantly needing to resist the temptation to squander this wealth for lesser means.

Like the prodigal son we fall and struggle to return, and like him our pride can blind us to the truth of humility and need of reconciliation. In this short piece we will look through the parable, discussing various aspects witnessed in the parable, and how we can work to overcome these in our own lives.

“Wasted his possessions with prodigal living.” [Luke 16:13] | Pride And The Fear Of Reconciliation

Pride And The Fear Of Reconciliation | The Wealth

The parable begins with the son asking for “the portion of goods that falls to me.” (Luke 16:12) This occurs long before the death of his fathers and is a demonstration of his haughtiness and struggle with recognition of his place in his own family. In many parts of our own lives we can struggle with our portion, believing ourselves worth more than God has provided us with. In this manner he goes off to squander what is given to him, and we are hold that he has, “wasted his possessions with prodigal living.” (Luke 16:13)

This is directly reminiscent of the warning received in Proverbs 29:3, that, “Whoever loves wisdom makes his father rejoice but a companion of harlots wastes his wealth.” Reflecting on this, we are perhaps asked whether the gift of salvation is something we make light of through our actions and attitudes. When we seek to be baptised, we often do not truly comprehend what is before us and forget the great responsibility which comes with it, being to walk in a manner worthy of Christ as he warns us often.

“his son bears the image of those who suffer the fall after the Laver.” St John Chrysostom | Pride And The Fear Of Reconciliation

Pride And The Fear Of Reconciliation | The Falls

St John Chrysostom also makes this comparison in his homilies, stating how “his son bears the image of those who suffer the fall after the Laver. That he represents those who fell after baptism is obvious from the parable.” In his commentary, St John notes the fact that he is a son, and a brother of a reputable person and thus falls from this beloved status over his pride and wish to outdo what he is given. In this way we care called to recognise the gifts presented to us through Christ and his Church.

It his writing, he explains how, “his father did not hinder him from departing to the foreign land precisely for this reason: so that he could learn well from the experience how much beneficence he enjoyed while remaining at home.” In this way, we are also often called into God’s love similarly face an onslaught of responses and temptations from outside of it.

“If something is more comforting in trouble we must ask if it is truly of more comfort than the promise to be with our creator in paradise.” St John Chrysostom | Pride And The Fear Of Reconciliation

Pride And The Fear Of Reconciliation | The Promise

In this way, St John Chrysostom’s reading of this passage presents us with an interesting solution to the question of how we are to respond when we feel torn from our faith or struggle with its justification in the face of temptations, and that is to recall the vitality of God’s glory and the promise of salvation.

Like the prodigal son, whose pride calls him away from the presence of his father and leads to him squandering his riches on self-indulgence, only to return upon realisation of the comfort of his father’s home, we must also consider the promise of salvation against all other things. If something else seems simpler we must ask if it is salvific.

“his father saw him and had compassion.” [Luke 15:21] | Pride And The Fear Of Reconciliation

Pride And The Fear Of Reconciliation | The Interaction

However, in the case of the prodigal son the story does not end with him making this realisation and simply accepting his station, for his pride and lack of humility also becomes a stumbling block and he feels unable to face his father, deciding to ask to come back as one of his hired servants due to his shame. However, the response of the father was not one of someone angry with the transgression but of joy, as the Gospel of Luke tells us, “his father saw him and had compassion.” (Luke 15:21)

It is in this that we see our second solution to the challenge of pride and shame preventing restoration, and that is simply the recognition of humanity in another. As St John Chrysostom states regarding this interaction between the father and son; “his father did not remember the wrongs that he had committed against him but accepted him with open arms. Why? Because he was a father and not a judge.”

“Our Father and Creator is not one to condemn us in our repentance, as he states in many other parables, but is one to welcome us back with open arms” Deacon Daniel Malyon | Pride And The Fear Of Reconciliation

Pride And The Fear Of Reconciliation | The Return

Similarly, when we struggle in our faith, perhaps missing a liturgy, we find it easier to hide away and refuse to face the situation. This provides us with shelter from needing to face up to the situation, and often simply leads to us cutting ourselves off from others. Many have fled from the Church in this manner, but in the case of the prodigal son it was the realisation of the lack of judgement from his father that made him able to return.

In the same way we should realise that our Father and Creator is not one to condemn us in our repentance, as he states in many other parables, but is one to welcome us back with open arms, the reward of reconciliation.

“Be willing to set aside our pride and self-centredness, accepting the reward of reconciliation and peace of life with God.” St John Chrysostom states | Pride And The Fear Of Reconciliation

Pride And The Fear Of Reconciliation | The Rewards

As St John Chrysostom states, of the Father’s actions, “What are you saying? These are rewards of wickedness? Not of wickedness, O man, but of the return.” In the same manner when we are conflicted we should remember the warmth of our father’s house and be willing to set aside our pride and self-centredness, accepting the reward of reconciliation and peace of life with God.

Pride And The Fear Of Reconciliation

0 0 0
Previous : The Heart And Witnessing Faith To Our Children
Next : Our Free Choice
Deacon Daniel Malyon