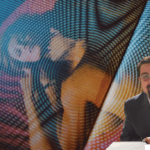 Previously, we looked at depression in the Bible specifically. Besides depression, Biblical characters suffered from other mental health-related issues. Some of these issues were fleshly lust, anxiousness and distrust. In this article, we will take a closer look at the first issues “Fleshly Lust In The Bible”.

“even if one thinks he is bigger than the temptation, thinking that the temptation is too weak to seduce him, being around it too long will lead him to fall nevertheless.” Fleshly Lust | Different mental health issues in the Bible

Fleshly Lust In The Bible | Samson

Samson, one of the famous Judges is Israel, is yet another example of personal weakness in the Bible. Samsons’ strength was his hair. The Angel of the Lord told his mother that she would bear a son and that ‘’no razor shall come upon his head’’ (Judges 13:5). Samson was chosen to free the Israelites from the Philistines, but while doing so he stumbled over his main weakness; his fleshly lust.

The Philistines plotted numerous traps for Samson to fall, but none of them worked. This was until Samson met a woman named Delilah, whom the Philistines used to plot Samson’s fall. The Philistines told Delilah ‘’entice him, and find out where his great strength lies, and by what means we may overpower him, that we may bind him to afflict him’’ (Judges 16:5), so Delilah agreed and tried to seduce Samson.

Delilah asked Samson four times (Judges 16:7-14) what the source of his strength was, in hope to be able to tell it to the Philistine elders for them to use it against him. However, Samson answered four times using random examples, leaving Delilah, and the Palestine elders, angry.

The fifth time Delilah used a devious plan; she told Samson ‘’how can you say, ‘I love you,’ when your heart is not with me? You have mocked me these three times, and have not told me where your great strength lies’’ (Judges 16:15), and so ‘’it came to pass, when she pestered him daily with her words and pressed him, so that his soul was vexed to death’’ (Judges 16:16).

“If I am shaven, then my strength will leave me, and I shall become weak, and be like any other man.” [Judges 16:17] Fleshly Lust

Eventually, Samson told her the truth and said to his secret, being that “no razor has ever come upon my head, for I have been a Nazirite to God from my mother’s womb. If I am shaven, then my strength will leave me, and I shall become weak, and be like any other man’’ (Judges 16:17). Samson’s strength was unmeasurable, and nobody could hurt him. His strength was so great that Samson ‘’found a fresh jawbone of a donkey, reached out his hand and took it, and killed a thousand men with it’’ (Judges 15:15).

This was, however, his physical strength. His mental strength, or rather the lack of it at times, ultimately led to his fall. Someone as strong and as powerful as Samson, who was blessed by God prior to his birth, fell as he let his lusts get the better of him. He knew that the Philistines could not hurt him, so he didn’t take the whole situation seriously, which eventually led him to fall.

This shows that even if one thinks he is bigger than the temptation, thinking that the temptation is too weak to seduce him, being around it too long will lead him to fall nevertheless. Just like Samson, one’s will power could and will decrease the longer the exposure to temptation is.

“Knowing this, most people would question how David could still be seen as a symbol of Christ. The answer lies in one word; repentance. Where his fleshly lust made him fall, his repentance made him stand once again on his feet.” Fleshly Lust | Different mental health issues in the Bible

Fleshly Lust In The Bible | David

Another example of fleshly lust is David the King and Prophet. David lusted after a woman, although she was married. In order to circumvent adultery, he thought, ordered the death of her husband. After her husband died, he approached her in order to be intimate with her. After his deed, Nathan the Prophet went to David telling him indirectly about his bad deed, using a metaphor of a rich and poor man. Nathan told David that “there were two men in one city, one rich and the other poor.

The rich man had exceedingly many flocks and herds. But the poor man had nothing, except one little ewe lamb which he had bought and nourished; and it grew up together with him and with his children.

It ate of his own food and drank from his own cup and lay in his bosom; and it was like a daughter to him” (2 Samuel 12:1-3), to stress his bad deed. Continuing his metaphor, Nathan said that “a traveler came to the rich man, who refused to take from his own flock and from his own herd to prepare one for the wayfaring man who had come to him; but he took the poor man’s lamb and prepared it for the man who had come to him” (2 Samuel 12:4).

Upon hearing this story, David’s anger was greatly aroused against the man, and he said to Nathan, “as the Lord lives, the man who has done this shall surely die! And he shall restore fourfold for the lamb, because he did this thing and because he had no pity” (2 Samuel 12:5-6), stressing the bad deed of the rich man.

What David didn’t know was that Nathan had used this metaphor to explain to him the weight of this own sin, but instead of condemning him directly he used a metaphor to teach David a lesson. So, Nathan told David that he actually meant him, and after telling David his punishment from the Lord, David realized what he did and told Nathan that he had “sinned against the Lord” (2 Samuel 12:12). God had punished him for this because ‘’the thing that David had done displeased the Lord’’ (2 Samuel 11:27).

God did not personally punish David, but he died the son of the aforementioned woman who died (2 Samuel 12:15-23). On this basis, David showed repentance, and then he wrote the famous Psalm of repentance (Psalm 51). David, one of the men symbolizing Christ the Lord, sank down to a point where he ordered a man’s death in order to commit adultery. Knowing this, most people would question how David could still be seen as a symbol of Christ.

The answer lies in one word; repentance. Where his fleshly lust made him fall, his repentance made him stand once again on his feet.

In the next article, we will take a closer look at the “Anxiousness” issue in the Bible.

Delivered to you by COPTICNN™ | Coptic News Network on 2020-03-30 from Kudelstaart. Netherland.


Wasim Shehata's background is in Biomedical Sciences, and he is currently finishing his master's degree in Biomolecular Sciences. He is a subdeacon in readers' order in the Coptic Orthodox Church and a theology enthusiast. Wasim particularly enjoys the Church History and practical/contemplative aspects of theology and apologetics.


Wasim Shehata believes that today our youth face many challenges, and we must answer all their questions as they strive to remain in the Orthodox faith. Also, he is an extraordinary mental health advocate. Wasim is well-read into both the psychological and scientific aspects of, mostly, depression, anxiety, and panic disorders.